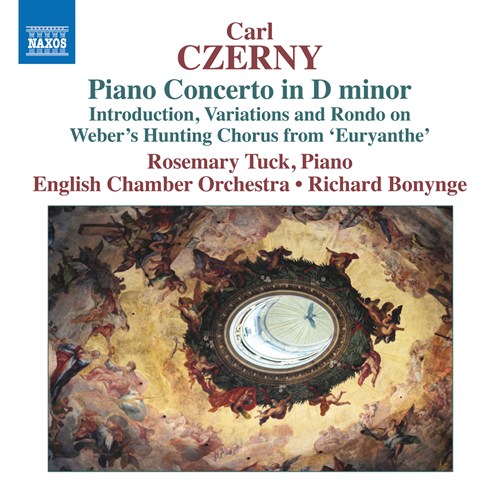 Australian pianist Rosemary Tuck has followed up her fine account of Carl Czerny’s ‘official’ First Piano Concerto with another disc of music by a composer so feared by piano students for his dreaded exercises that he’s acquired a reputation as little more than a musty pedagogue. Anyone who has heard his dynamic, if somewhat derivative, symphonies (try the Brandenburgisches Staatsorchester Frankfurt on Christophorus) already knows that to be quite untrue, and Tuck, aided and abetted by the English Chamber Orchestra under the indefatigable Richard Bonynge, offers yet another exhibit to testify to his inventiveness and thematic facility.

The coup here is the Piano Concerto in D Minor, written when Czerny was a mere slip of a 20-year-old, and still in the immediate orbit of Beethoven – around this time he took on the challenge of teaching the older composer’s wayward nephew. The work starts off with a marvellous brooding introduction, full of romantic yearning, rolling timpani and building momentum, soon followed by singularly Beethovian passages of chattering of woodwinds and more than a hint of late-Mozart. A trumpet fanfare and positively Brahmsian horn solo heralds the arrival of the piano, which enters a remarkable five-minutes into the movement.

If Czerny lacks his master’s thematic memorability, he proves a true adept when it comes to developing a musical gesture. The first movement is a behemoth, weighing in at 25 minutes, but although overlong it holds the attention pretty well. Tuck and Bonynge pace it well, giving each episode space to breath, and Tuck’s endlessly busy fingers offer much to admire in terms of sheer technique.

At four minutes, the Adagio, though beautifully scored with ravishing horns and echoes of his master’s Pastoral Symphony, is hopelessly overbalanced by what has come before. Building nicely, it drives headlong into the finale, a rollicking and substantial Allegro molto vivace, which fairly gallops along laced with horn calls and a motto which really does lodge in the brain to the rhythm of “a-hunting we will go”.

Naxos’s recording is a little congested – the novelty of four horns gets buried at times in the background wash – but Bonynge rescues a great deal through a sensitive awareness of all that is going on in this young man’s sometimes over-ambitious scoring.

The appealing Introduzione e Rondo Brillant in B Flat – a later work from 1833 – is a fine essay in the form, though the 24-minute Variations and Rondo on the Hunting Chorus from Weber’s Euryanthe tries hard – but really does outstay its welcome – you’re well over five minutes in before you even hear the theme and you still have 20 to go! Fortunately, it’s a decent theme and given plenty of welly on the horns à la the original (Weber’s opera was only a year old when Czerny composed his homage). Tuck gets stuck into it with much perky byplay around the seven-minute mark, but by 16 minutes and counting the attention starts to wander.

Where comparisons are possible – in the case of the Introduzione e Rondo Brillant, which Howard Shelley included on his Hyperion Romantic Piano Concerto disc of Czerny – it’s a case of horses for courses. Shelley finds more drama and shape, and Hyperion’s recording has greater depth to both orchestral and piano sound. Tuck goes for grace and charm – which in this kind of occasional piece is half the battle – and yields little in technique to her British rival.