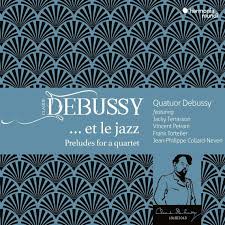 Classical music and jazz have always enjoyed a symbiotic relationship – uneasy at times, happy at others. Dave Brubeck, Wynton Marsalis, Bill Evans and Keith Jarrett are all jazzmen who have been equally at home in both environments and it is now almost de rigueur for recitalists to finish the evening with a little Gershwin or a jazzed up classical standard.

From the “other side”, progressive string quartets like Americans Kronos and Brits the Brodskys have never shied away from crossing trans-genre boundaries, with the Kronos setting the benchmark in the 1980s by taking on the music of Thelonius Monk and Bill Evans.

Bach, Mozart and Erik Satie are popular candidates for this treatment, but Debussy has largely been left untouched, despite three great jazz figures – Duke Ellington, Miles Davis and John Coltrane – all citing him as a big influence on them.

Now with his centenary year comes this release from the splendid Debussy Quartet and some friends in a remarkably attractive cyclical suite of improvisations and arrangements of some favourite piano preludes.

It begins and ends with – where better? – The Girl with the Flaxen Hair and “C” Influences. This features that most Gallic of instruments, the piano accordion of Vincent Peirani, and contrasts the irresistible calm melodic tug of Debussy’s prelude from book one with the disjointed quirkiness of Général Lavine, Eccentric, which could be a soundtrack for a Jacques Tati film.

Since forming 27 years ago in Lyons, where they were all students, the Debussy Quartet of violinists Christophe Collette and Marc Vieillefon, violist Vincent Deprecq and cellist Cédric Conchon have established themselves as one of the hardest-working string quartets on the concert circuit. They are noted for their adventurous performances, trailblazing new French music and for democratically swapping lead violin duties. Last year they toured here playing to full houses and earning rave reviews. This gem of an album will show you why.