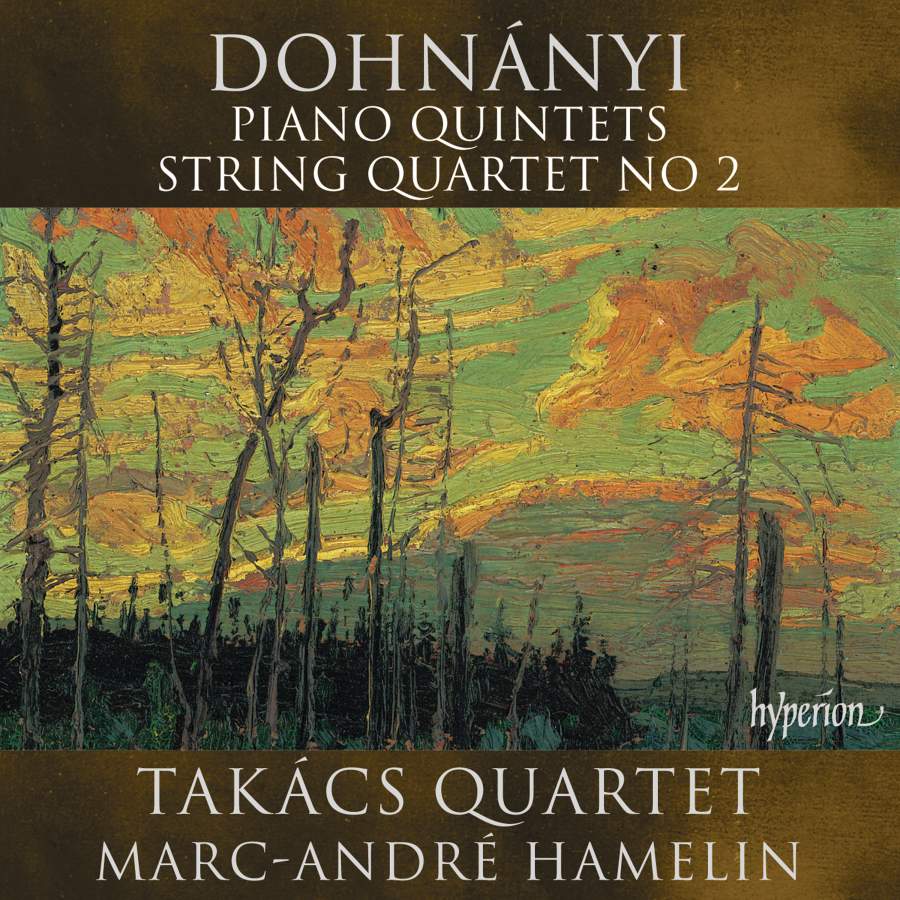 Apart from his most famous piece – his Variations on a Nursery Song of 1914 – Dohnányi is better known for who he was than for his music. His reputation as a fine pianist, and as a voice for conservative values, ignores his advocacy on behalf of younger Hungarian contemporaries including Kodály and Bartók, and his own considerable achievements as a composer. And they were considerable: this album is a first-class journey back to a gilded age of chamber music, when the harmonies
were as rich as a dessert by Escoffier and the language as highly coloured as a painting by Alma-Tadema.

I am not being flippant; these incipiently orchestral chamber works, as played here, emerge as beautifully written, shapely and consistently engaging. The first Piano Quintet is an astonishingly confident achievement for a 17 year old, and you can hear why Brahms admired it so, even if the Adagio has a kind of high-flown gorgeousness the mature Brahms rarely attempted.

The other two, later works show the same high level of craft but explore more ambiguous emotional terrain; both the Quartet and the second Piano Quintet come to quiet, pensive conclusions. They are also both in three rather than the conventional four movements, which would have been considered quite progressive at the time.

A few decades ago you would have been lucky to have heard these works played by a major ensemble; to hear them now, performed by the Takács and Hamelin, is a privilege. Their collaborations on Hyperion are unfailingly fine (their Schumann Quintet is a case in point), and this one suggests, once again, that the performances are the result of profound engagement. The playing does not speak of any special pleading, and as a result Dohnányi emerges as a more compelling composer than you might expect. Nothing is routine and every moment shines with expressive purpose. Highly recommended.

The German-born maestro is making a comeback thanks to the return of the LP.

Misunderstood in their own day, what is it about Beethoven’s late string quartets that keeps players and audiences coming back?

Editor’s Choice, Chamber – Jan/Feb 2016 In-between a heavy international concert schedule and fulfilling their teaching commitments as resident ensemble at the University of Colorado in Boulder, it’s a wonder that the Takács String Quartet finds time to record for the Hyperion label, let alone live their lives outside of music. Luckily for us they manage, and hot on the heels of their first recorded venture into the wintry landscape of Soviet Russia and Shostakovich with Canadian pianist Marc-André Hamelin (reviewed in October‘s Limelight), they bring a contrasting blaze of colour, warmth and emotion with their latest release. The three works on this disc are custom-made for the Takács with their fearless attack, faultless technique and dazzling emotional range. Just listen to Geraldine Walther’s driving viola work in the first piece, Bedrich Smetana’s From My Life. This is a remarkable autobiographical work, depicting in the first two movements the Czech composer’s youthful love of art, his fondness for dancing polkas and for folk tunes. The beautiful, yearning slow movement is given over to his first wife, who died from tuberculosis, and two of their daughters who didn’t survive childhood. Of the finale Smetana wrote: “The fourth movement describes my discovery…

★★★★☆ Hyperion’s third instalment in their survey of Hungarian Ernö Dohnányi’s solo piano music explores the composer’s period of increasing professional establishment. Dohnányi’s language may be less familiar than contemporaries like Rachmaninov, Ravel, or even Scriabin, but share that early-20th-century strain of romanticism, sparkling impressionism, and the strong influence of folk music. The real treasure here is Ruralia Hungarica, a multi-movement work exploring folk material from Dohnányi’s homeland, including songs for minstrels, children and soldiers, and an energetic csárdás. Some movements feature songlike phrase structures with splashes of Debussian colour. Others adopt an almost Rachmaninov-like sense of power, with incessant chords in parallel fifths and rich dissonances. In contrast, the Three Pieces (Aria, Valse Impromptu and Capriccio) have a Chopinesque feel. The Gavotte and Musette are cute divertissements, though lacking ingenuity next to Ruralia Hungarica. The album is rounded out with virtuoso waltz arrangements of Delibes’ Nalia Waltz, and Strauss’s Schatz-Walzer and Du und Du.   Martin Roscoe captures every nuance with consummate virtuosity and a flair for negotiating the shifts in mood that characterise Dohnányi’s style. The interpretation is romantic but never overdone, painting in shades that one moment suggest drama, the next serenity. A fine performance of captivating…

Limelight Editor’s Choice – Chamber – September, 2014 Was there really any doubt that this latest release from the Takács Quartet would be superb? Their previous discs of Brahms (including the Piano Quintet, Op 34 with Stephen Hough, and recordings of the string quartets) have been revelatory.  In writing these two quintets, Brahms chose to follow Mozart’s example in his choice of configuration for the strings with doubled viola, rather than the Schubertian choice of a second cello. Here, the Takács Quartet is joined by violist Lawrence Power to give powerful, dark-toned performances of Brahms’s string quintets. “Here is a marvellous example of how to work closely with other players in chamber music” The first quintet (in F Major, Op 88) was thought of by Brahms as one of his best works – he wrote to Clara Schumann boasting about it, and wrote to his publisher Simrock, saying simply, “You have never before had such a beautiful work from me”. It’s in this first quintet that Lawrence Power particularly shines, his tone enriching the texture most beautifully. The additional viola is given several extensive solos, and they’re played with passion and verve. In the slow movement, Brahms writes in the…

Although critics tend to single out his marathon Piano Concerto in five movements and his magnum opus, the opera Doktor Faust, like Franz Liszt, the vast majority of the Florence-born Feruccio Busoni’s compositional output is devoted to work for the solo piano. It is indeed appropriate that the Canadian pianist Marc-André Hamelin who specialises in obscure and difficult scores has now turned his gaze on this virtuoso and teacher.  Perhaps more than any other composer this side of Henze, Busoni has brought an ingenious balance to bear between Teutonic counterpoint and sunshine and passion from the Mediterranean. Whilst Busoni’s philosophical ideas in the New Aesthetic pair him with the likes of Nietzsche, his musical composition is perhaps not so forward thinking – like Mahler, he still teeters on the edge of tonality whilst suggesting the ideas of Paul Hindemith’s sonatas of the 1930s. Even now pianists, if they approach Busoni, tend to focus on his Bach transcriptions rather than upon original works – though even here we find witty appropriations of English folksong (Greensleeves) and Bizet’s Carmen. Very little of this work has been favoured by modern pianists. The major exception is the Adelaide-born and Dutch-based contrapuntal specialist Geoffrey Douglas Madge…

Here are two exceptional reissues. The Brahms consists of 1980s recordings featuring András Schiff with the Takács Quartet in the F Minor Piano Quintet, and with Viennese colleagues in the Horn and Clarinet Trios. VPO principal clarinetist Peter Schmidl is heard in the Clarinet Quintet. If that weren’t enough, Schiff plays the four-hand Variations on a Theme of Schumann, joined by no less a partner than Georg Solti. This fine collection covers works from all periods of Brahms’s life, but is especially recommendable for the autumnal late works. An interesting comparison may be made with the heart-on-sleeve Clarinet Quintet played by a Viennese ensemble of an earlier era, in the massive but treasurable Westminster Chamber Music collection. Fascinating generational differences. The ASMF disc restores Argo recordings from 1968 when Neville Marriner still played violin with the ensemble. Boccherini’s late quintet (one of over a hundred of the composer’s works in this form) is typically gentle and mellifluous, while Mendelssohn’s Octet is a recognised masterpiece. Both are very well played, though I think the Academy’s English good manners suit Boccherini better.