The nearby industrial town has been abandoned, the guardians of the homestead have a loaded gun at the ready and the water supply has been shut off. Toilet paper is being rationed, Claus has not returned and the snakes are closing in on what little food remains. The situation is dire; hopes are all but dashed, so of course, it’s time for tea. 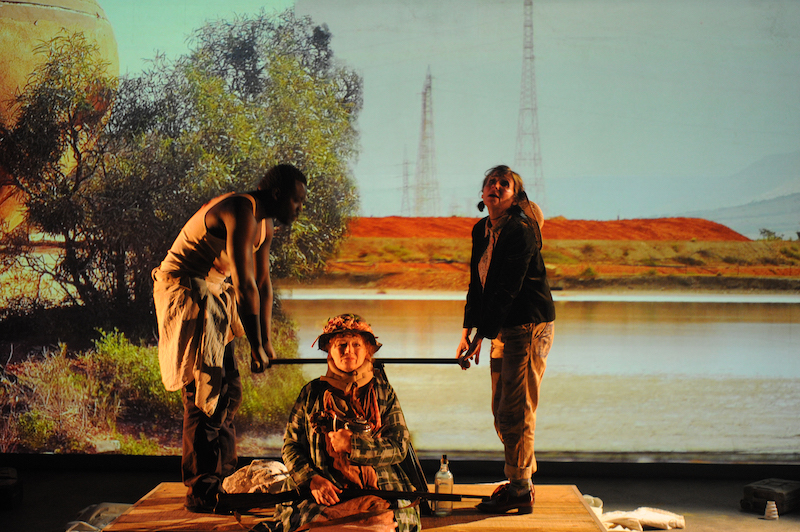 Catherine Fitzgerald writes and directs this dark, suspense-laden tale of endurance. Touted as a “dystopian absurdist Western”, this unusual genre lends itself completely to the hardships, despair and battles endured by those who ask of the land, the wrong questions.

We can all but smell the dust underfoot as sisters Patience (Eileen Darley) and Ellen (Caroline Mignone) gamble that the dry will break before the drought breaks them. The land is at its most unforgiving as they choose to fight against the competing forces of the things within their control and those that are not.

The siblings are well drawn, with a power imbalance recognisable in many familial relationships. Darley and Mignone deliver commanding, well-paced performances with a consummate rhythm. As we get to know their characters, hints of acerbic wit bubble up revealing a history of competition that we hope they will conquer to escape the dilemma. The sisters argue about arguing and hold onto ludicrous ancestral traditions with a tenuous connection to a culture they can only have experienced tangentially.

The siblings’ catastrophic decision to stay on their poisoned land abandoned by everyone else, challenges us profoundly. Propelled by the fear of going without, the expectation of keeping what they have worked for competes keenly with their perception that they have no other choices. When a stranger (Stephen Tongun) enters their house desperate for water, the dynamic shifts and the scope of his plight expands our notion that the sisters are alone in their world of troubles. Tongun brings a passion to his character that is at times so well done, it’s hard to watch. 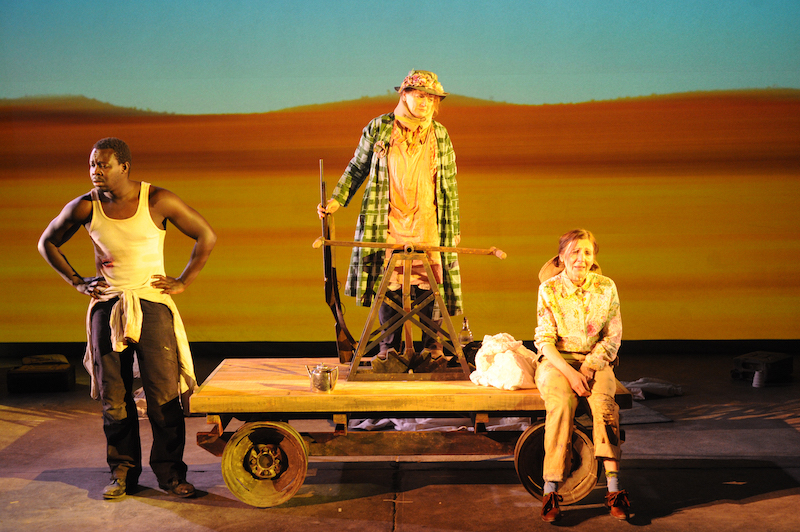 The mise-en-scène is exceptional, promoting a sense of an endless land without hope for those whose knowledge of it is limited to their migrant experience. In a place where lives and fortunes are won and lost on nothing more complicated than a break in the weather, the false alarm towards the close is excruciating, wholly exposing the frailty of our lot.

Fitzgerald has assembled a crack production team and despite some minor technical glitches on opening night at Hart’s Mill, there is much to admire in this show. Composer Catherine Oates magically transforms the audio spaces into harmonious ambiences that just about blow the dust into our eyes. Photography by Alex Frayne is exemplary. The vast expanse of the land’s beauty and terror is everywhere – burnt, brutal, exquisite, dangerous and awesome. This is aided ably by Nic Mollison’s excellent lighting design; the sense of space created is transformative. The sparsely dressed, inventive set by Gaelle Mellis brings the outside in, and speaks of a place where making do has to be enough.

DRY has gentle humour dotted throughout, but this production could in no way be described as light-hearted. There are descriptions of a disturbing nature and the constant reminder that there simply isn’t enough to drink makes for, at times, thirsty work.

Raw and edgy, DRY is a challenging and intriguing testament to those living in the regional South Australian outback towns which inspired the play.

The South Australian regional tour and performances of DRY at Hart’s Mill, Port Adelaide are presented by Far & Away Productions and Country Arts SA. DRY plays at Hart’s Mill until 20 November.

A new take on an old classic reveals uncommonly good gossip as currency.