What do you get when you combine a koto, double bass, and alto sax? The Evans/Odamura/Elphick trio – one of the most invigorating live jazz performances you will catch in Australia to date.

On Friday night at the Utzon Room in Sydney’s Opera House, master koto player Satsuki Odamura joined Australia’s most celebrated and influential saxophonist, Dr Sandy Evans and ARIA-Award winning bassist Steve Elphick for the first half of a concert showcasing an impressive array of Evans’ and Odamura’s compositions. 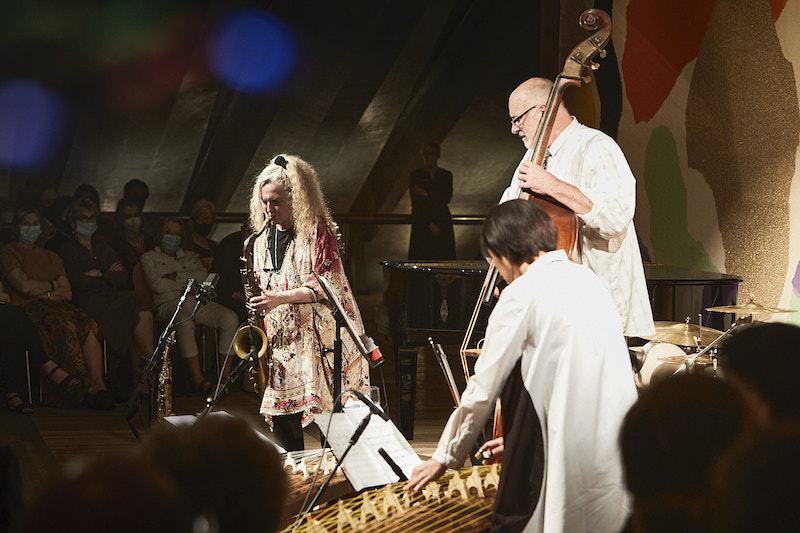 Odamura and Elphick have both appeared on Evans’ albums in the past, including Rockpool Mirror (Tall Poppies) from 2017, which saw the masterful pieces for the koto, such as Her Wild Spirit (2019) for tenor saxophone, koto and bass koto, and Love is a Deeper Season (2020) for koto, bass koto and taiko.

In the Utzon Room, the trio opened with Where to now?— Evans’ musical essay, exploring a sentiment she’s been harbouring about the fate of the world after the COVID-19 pandemic.

Odamura bowed before entering her stage space, kneeling beside her 13-string instrument as she plucked the opening notes of the composition – a bolt of sound that shocked audiences to attention.

She weaved around with Elphick on the bass, the pair circling a central motif before Evans entered with a hypnotic passage. Her swirling runs exhibited her signature boldness, and her ability to shift immediately from fortitude to tenderness was astounding to hear.

She continued her sonic choreography as Odamura flung her arms and fingers around her instrument, sending the melody into a perpetual, and momentous climax, while Elphick maintained his drones and reliable octave leaps sustaining the foundation of the piece.

Already, the opening piece dazzled audiences with its genre-bending flair, as the three legendary musicians carved a musical tale of adventure, exuberance and boisterousness.

Elphick’s and Odamura’s composition Out Trance, saw a more minimalist take on the possibilities available for the double bass and the two kotos Odamura had that night; the 17 string bass koto, and the 13 string koto. Elphick explained to audiences he was interested in examining the characteristics his instrument had with Odamura’s; this piece was less about explicit narrative, and more about setting a mood.

There was strength and athleticism to Odamura’s playing — watching her change the pitch with her left fingers and thumb pressing the strings was akin to seeing the graceful poise of an Olympic fencer.

Her majestic approach to music-making with Elphick and Evans created a mood of solemnity and humility. The addition of the bass bow to the koto complimented Evans’ ferocious solo – each note is executed with so much care and thoughtfulness.

The trio finished their set with a range of compositions from Evans’ Rockpool Mirror album, including Lake Yarrunga, and Lake Yarrunga Colours.

“The last two years have been a time of change and suffering, uncertainty and unexpected happiness,” Evans declared. “For me, I am just incredibly happy to be here with these extraordinary musicians, who make my life worth living.”

Evans’ vivacious personality and charm emitted through each sound she ejected from her sax. We heard brilliant trills accompany the whirling cascading sounds from Odamura’s koto, as she shifted the bridges on her instrument, and moved dextrously along the koto’s long frame.

The energy of their performance was sustained in the concert’s second half, when a quartet of young musicians enchanted audiences with their progressive take on music inspired by Armenian mythologies. 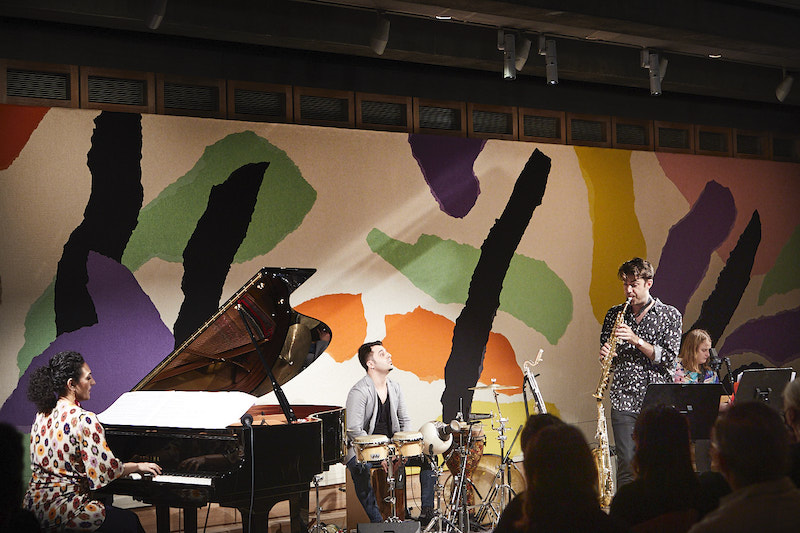 In a series of world-building pieces, saxophonist Jeremy Rose and pianist Zelda Margossian showcased their compositions as part of the ABC’s Fresh Start fund, with the project, Visions of Nar, named after the goddess of waters and the ocean – a powerful female force in Armenian mythology.

They were joined on stage by extraordinary percussionist Adem Yilmaz, a member of Margossian’s own quintet, and this year’s Freedman Jazz Fellow, Hilary Geddes on guitar.

In an hour-long set, the ensemble painted a sweeping soundscape of the towering mountains of Armenia and the joyful surroundings of the Vernissage Market in the capital, Yerevan.

The ensemble worked cohesively, with each member displaying a high level of awareness of their role in creating the scene of water, thunder and the ocean in Dance of Nar, Daughter of the seas and Mythical union, all composed by Margossian’s ethno-jazz, folk-infused style.

As I sat in the audience, arrested by the music’s vigorous playfulness, I found myself thinking “What is jazz?”

The pushing of existing boundaries? The creation of new sounds? The slow, gentle inculcation of sounds the world has not yet heard? Or the sensation of crossing foreign, sonic heights?

When it comes to this band, all of the above. I enjoyed Margossian’s compositions, as her writing distributed melodic and rhythmic singularity more evenly across all the players.

Her pieces allowed for each musician to display their own, unique voice. At times, Rose played many notes when he didn’t need to, and a few high registers were compromised by spitty sounds. But overall, his tone was broad, expansive and pleasant.

Rose’s works, Birth song, Heaven and Earth and Smoke and flames were good — with interesting and complex rhythms.

A tight rhythmic foundation was set up by Geddes on the guitar and Yilmaz on percussion. The metre changes were launched into with no flaws, and sustained by a clarity of sound from Margossian at the piano.

At times, Rose’s sax drowned out Geddes’ intricate, meandering sequences on the guitar, but it was still a piece which had “…the ability to bring interesting personalities and cultures together,” as Rose explained while introducing one of his pieces.

In the few times we were able to hear Geddes’ strut her skills, she showed off her quickness and musical wit – someone who is clearly on top of her instrument. Her self-awareness as a performer, and a musician as part of an ensemble is astonishing.

Margossian’s solos were immersive and sweeping in its power and austerity – there was a magnifying pull to her phrasing, and her onstage connection to Yilmaz was magical to witness. It was as if they were connected by some invisible force, flawlessly weaving together.

There is a feeling you get when you are witnessing something remarkable unfold in front of you – something called genius. It’s unique and distinct and rare, and you know it the moment you see it – in this case, hear it. Yilmaz was that genius on Friday night, slapping and tapping and drilling and striking his collection of percussion instruments, which surrounded him like an astronaut surrounded by their flight control panels, ready to launch into space.

Throughout the concert, his use of the fiberskyn hand drum, cajon, udu drums, thunder drum, bells and maracas was extraordinary to witness. His dexterity was mesmerising to hear. His sound was pure and real, wholesome and enchanting.

The performance evoked a tremblingly gorgeous mystical realm – one we were only too fortunate to embrace.

These players in Pharos understood the key to playing great jazz: an invulnerable attachment to the spirit of the music, and the ceaseless tenacity to explore the full range of human dynamics through intuitive collaboration.

Hilary Geddes is ready to spring into live music again

After a winter spent locked down in Sydney, guitarist Hilary Geddes is itching to get back to playing gigs again – starting with the Sydney International Women's Jazz Festival this weekend.

The ear and now of Australian jazz

Jeremy Rose talks jazz in the time of corona, the resilience of musos and showcasing the best of the local scene at the Earshift Music Festival.

A commissioned work focusing on the importance of water and waterways flows neatly into a band set from award-winning guitarist Hilary Geddes.

An improvisational powerhouse pushing the limits of jazz, blues, and middle eastern music, live and intimate at the Utzon Room.

Review: Jeremy Rose: Iron in the Blood (The Earshift Orchestra)

Jeremy Rose read The Fatal Shore, Robert Hughes’ seminal account of Australia’s invasion, colonisation and transformation into a penal colony, in 2012. He was struck by the brutal reality faced by prisoners shipped over from the continent, as well as by the Indigenous population, and eventually found a way to engage with that dark history through music. Iron in the Blood is a series of scenes performed by Rose and the Earshift Orchestra, underscoring narrated excerpts of Hughes’ work, read by actors Philip Quast and William Zappa. The excerpts give an overview of the struggle of the convicts, as well as the cruelty of British officers and lawmakers. The descriptions of the treatment of the original population – particularly the genocide of Tasmania’s Aboriginals – are harrowing. Musically, Iron in the Blood is an eclectic experience. Tracks draw on more conventional jazz idioms, while art music traits are present too, including sonic landscapes with dislocated, chromatic harmonies and extended instrumental effects. Some of the most intriguing features are the extended, frantic, improvised solos, often underscoring the most disturbing parts of the narration.   Individual performances and sound are excellent, and the narrations are enjoyable both on a theatrical and educational…