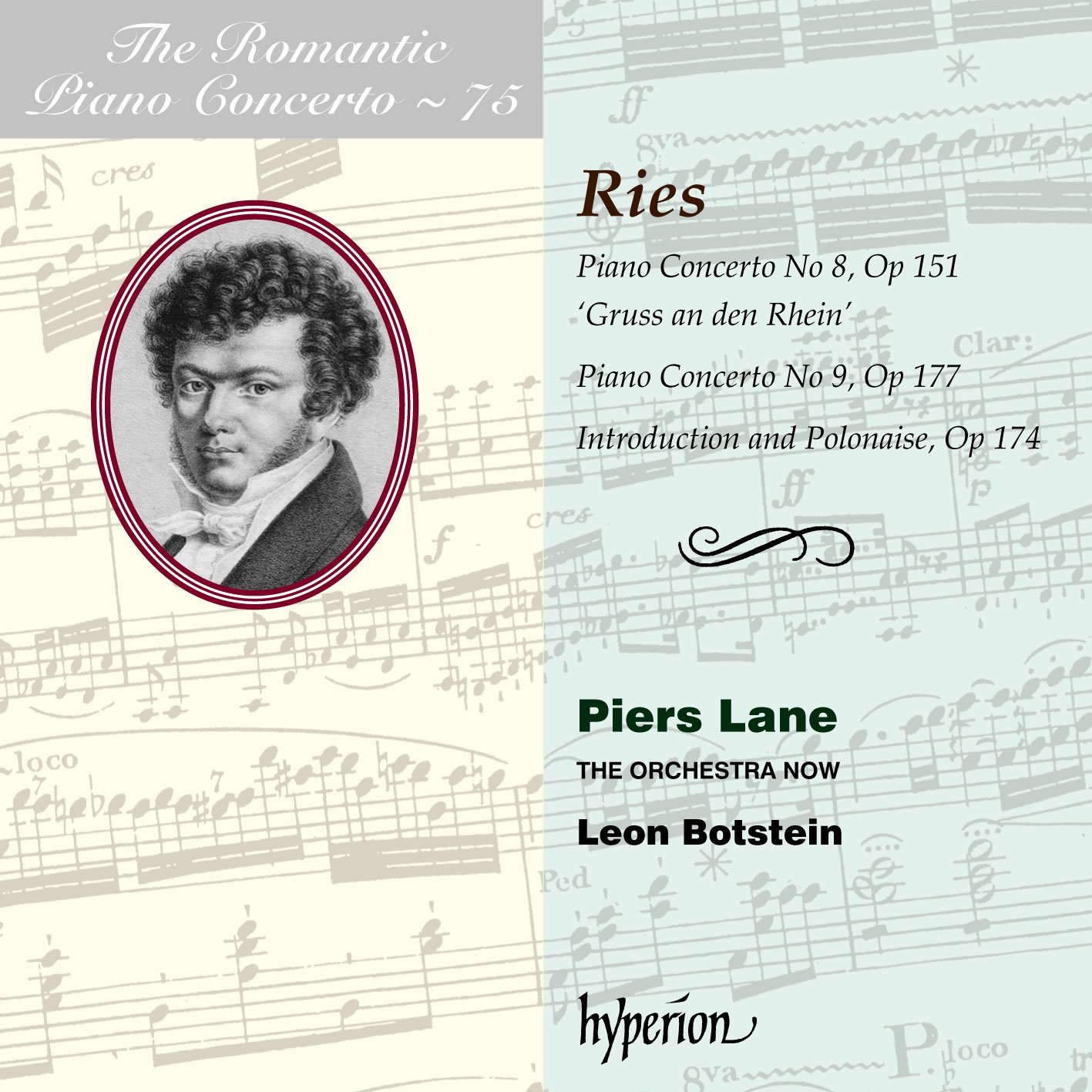 Hyperion continues its gargantuan archaeological dig for obscure romantic piano concertos with Volume 75 dedicated to Beethoven’s pupil and assistant Ferdinand Ries. The ever-reliable Australian pianist Piers Lane is in wonderful form on this delightful disc, admirably supported by The Orchestra NOW, a training band of musicians from around the world under the steady baton of Leon Botstein.

A London music journal in the 1820s praised Ries’s playing as being often surprising and “distinguished from that of all others by romantic wildness”. Beethoven had been taught violin by Ries’s father Franz Anton and then took Ferdinand on as his pupil and assistant. He helped Beethoven stage his gigantic 1808 benefit concert which included the premieres of the Fifth and Sixth Symphonies and the Fourth Piano Concerto. We do hear Beethoven references in these works but Ries has his own voice, less symphonic and more taken with pianistic virtuosity. The orchestral writing is superb with lovely use of woodwinds and horns – especially in the Eighth Concerto, a joyful work with pastoral touches written to celebrate his return from London to his beloved Rhineland home.

The Ninth Concerto is darker in mood although still with plenty of brilliant solo passages and the Introduction and Polonaise, like the other works, owes as much to the young Chopin as to his old master. All in all these are late works which show the Rhinelander to have been significantly more than just a virtuoso performer. They could take their place on a concert program alongside works by Mozart or Beethoven. It is to be hoped that Lane will bring them to Australia – along with more Ries – on one of his regular visits here.

Beethoven reportedly remarked that Ries imitated him too much, but I don’t think the modern listener would agree when they hear this beautifully produced and enjoyable disc.

Piers Lane dazzles, charms and calms in these English concertos.

Read the May 2018 issue of Limelight Magazine online

Lane and the QSO deliver orchestral storytelling and emotional extremes.

Chamber music didn’t figure particularly strongly among The Mighty Handful, who established a Russian Nationalist school, which incorporated native themes and folk lore into symphonic and orchestral music. In fact, their  only chamber piece to enter the mainstream chamber repertory is featured on this CD: Borodin’s Second String Quartet in B Minor.  A mature work which, unlike so much of his oeuvre, Borodin actually managed to complete, it is still beguilingly beautiful after all these years, surviving Kismet (whose music I love), and is beautifully and affectionately played by the Goldners. This foray into Borodin’s obscure chamber music is highly rewarding. The companion works are not new to CD but Borodin’s Piano Quintet (there’s a recording of it by Martha Argerich and “friends” at the 2014 Lugano Festival) and his Cello Sonata are likely to be terra incognita to most people.  None of the music featured here is characterised by the traditional, uniquely Slavic sense of yearning, especially in the Piano Quintet where they are joined by pianist and regular collaborator Piers Lane. This early work is sprightly charm personified. Though it’s not in any sense salonistic, the spirit of Mendelssohn hovers over much of it, and the players have…

The end of the Piers show

As Piers Lane prepares to pass the baton at this year’s AFCM, we look at the life and career of a great Australian pianist.

Australian composer Alfred Hill clearly liked to borrow music from himself, as his Piano Concerto in A features here on this Hyperion release alongside its source material – his Piano Sonata in A. Johannes Fritzsch leads Piers Lane and the Adelaide Symphony through this glowing, romantic score.   The concerto is being recorded 75 years after its Australian premiere. Lane’s performance is touching; patient with his melody, he seems to treasure each note with understanding and tenderness. The third movement Nocturne – (Homage to Chopin) – is filled with yearning, swells in the strings given added presence by gentle timpani. The album is well mixed, enabling us to hear and feel the communication between each part. Its finale is tasteful and radiant. Between the two Hill works sits George Boyle’s Piano Concerto in D Minor – perhaps the earliest work composed in this form in Australia. Coincidentally, its premiere was conducted by Hill in 1913. The work is theatrical and classy, taking us back to an era long past. After its hearty conclusion, Hill’s Piano Sonata then brings things down a notch. With all other instruments gone, it seems at first that something is missing. But it doesn’t take long…

A Wykehamist friend, who lived in Norfolk, once drolly opined that every British composer born in the final decades of the 19th century invariably composed something called “Idyll for Strings.” True enough: all those depictions of torpid, hazy late-Victorian/Edwardian summer afternoons. I’ll admit I was expecting this CD to contain little else. Not really. Much of this music is quietly trenchant, even defiant, in a civilised way, as well as being beautifully crafted and containing a fulfilling combination of radiant Romanticism and modernity. The magnum opus is Ireland’s First Sonata (the otherwise excellent sleeve note curiously refers to his Second, which I’ve never heard performed as the “more familiar”). I loved its Brahmsian touches with their uniquely English twists and its solid arguments. It richly deserves to be better known. Similarly, the unfinished Frank Bridge and Arthur Bliss works. The Bliss, dedicated to Lady Elgar, is more substantial and complex and conveys, among other things, the burden of grief the composer experienced to the end of his life over the death of his brother, Kennard, in the First World War, a war in which the composer himself was a combatant and obviously survived. I jolly well wish they had completed…

For their eighth outing with the British Hyperion label Australia’s finest, the Goldner String Quartet and pianist Piers Lane, transport the listener to the richly romantic sound world of Max Bruch. Famed for his first violin concerto – his other two remain relatively rare curiosities – the German composer wrote very few chamber works, and those that survive come from the beginning and end of his career. He composed two string quartets, the one on this terrific album is his first, from his student days. The influence of Brahms is all pervasive, but there’s no harm in that and the work, performed with great expressive beauty here by the double husband and wife team led by Sydney Symphony co-concertmaster Dene Olding, shows that the 18 year-old already had a good grip on development and technique, with strong melodies and some interesting dynamic shifts. Olding and Dimity Hall, second violin, combine beautifully while violist Irina Morozova and cellist Julian Smiles lend impeccable support.   Lane, who was born in London but brought up in Brisbane, joins them for the best work on the programme, the thoroughly engaging piano quintet, which Bruch slaved over for seven years before finally delivering to his…

Piers Lane on getting ahead of the competition

Competitions are mad, bad and dangerous for musicians, right? Not always, explains the AD of SIPCA.