When pianist Bernadette Harvey came to the stage for the second of two favourite works on the program she told the Musica Viva audience she was privileged to perform with one of the best in the world – Australia’s own Goldner String Quartet. 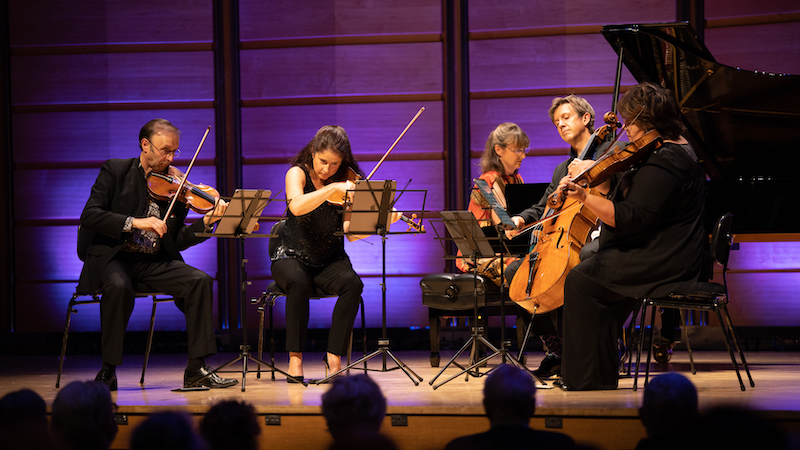 Of course, most of the seasoned audience have shared her view of the Sydney-based group for years – some devotees perhaps even going back to their inception in 1995. Unusual, possibly unique, in the fact that the quartet comprises two married couples, the Goldners celebrated their silver wedding anniversary quietly last year when the pandemic kept concert halls shut. It was to have been a double celebration with Aussie pianist Piers Lane as 2020 was also the 75th anniversary of the founding of Musica Viva by Roumanian-born violist Richard Goldner, for whom the ensemble was named.

So when Dene Olding, Dimity Hall, Irina Morozova and Julian Smiles walked on to finally do their party piece – Dvorak’s sunny, optimistic and life-affirming ‘American’ Quartet – to open this concert there was an even warmer than usual wave of what can only be described as love to greet them.

Wearing masks, QR-coded in and with double vax proof provided, the house was not quite at capacity but wasn’t that far off, and the relief that live music was back in these on-again off-again times was palpable. Ears that had been so attuned to headphones or earbuds over the past few months were quickly re-educated when the earthily gruff tones of Morozova’s viola etched out the catchy opening theme of this work, whose four movements, Smiles told us, each build miraculously from the same cluster of four notes.

While Dvořák was writing it in Spillville, Iowa, in 1893 he was homesick for Bohemia, while absorbing American folk music and birdsong, all of which play into the final result, and he was also thinking of Haydn, father of the chamber music form.

Papa Haydn famously said that a string quartet was a conversation between friends – in this case two married couples – and the Goldners, more than most, embody that spirit, each breathing as one with impeccable intonation, control of dynamic shifts and their glorious sound. The passage in the lovely lilting second movement when the twin violins of Olding and Hall build over the gently rocking lower strings to a shimmering pinnacle was almost heart-stopping.

As Smiles explained in his opening remarks, they all grew up with this work and the one that followed, Schumann’s Piano Quintet in E-flat Major, Op. 44, and barely a season has gone by when they haven’t played one, if not both of them.

For her part Harvey is another “old friend”, and there was an easy meshing of five personalities in this lovely performance. Harvey pointed out that she first played the quintet when she was 27, the same age Clara Schumann was when Robert wrote it for her.

She also picked the famous descending fifth figure, which came to be known as “Clara’s tune” and which is repeated no less than 40 times in the opening movement.

This concert was an unmissable hour to honour our finest chamber group who, Smiles pointed out, hadn’t all been in the same room for several months, yet alone on a live stage – “not the best way to keep a quartet on the boil”.

Landmarks of their illustrious career, for this reviewer, include their unforgettable three-day Beethoven cycle for Musica Viva in the Verbrugghen Hall in 2004 and landmark recordings of Peter Sculthorpe’s complete quartets on the Tall Poppies label.

Truly the Goldners are “16 strings playing as one”, as Hall once described the aim of any quartet worth its salt.

For this recital, Simon Cobcroft stepped in for regular cellist Tim Nankervis, with the trio delivering superb performances of Beethoven's 'Archduke' Trio and Haydn's Piano Trio in C.