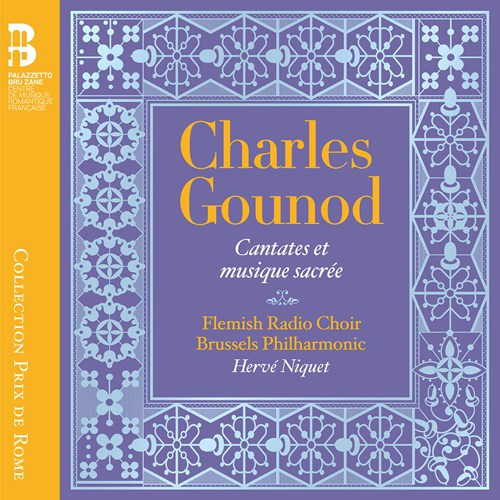 Back in the day, the hallmark of any up-and-coming composer was winning the Prix de Rome, the notoriously conservative Conservatoire competition that conferred on the victor a stay at the Villa Medici and an entrée into Parisian musical circles on his – and until Lili Boulanger came along in 1913 it was always a ‘his’ – return.

For all his youthful facility, it took Gounod three tries to carry off top honours, and although Fernand – a triangular romance between a Muslim maid, her lover and her would-be Spanish ‘protector’ – was his winning entry, it’s his previous, bolder (and therefore less likely to please the po-faced adjudicators) attempts that impress, especially the dramatic Marie Stuart et Rizzio. Along with La Vendetta, a tale of Corsican dirty deeds, these appealing, lyrical works receive persuasive advocacy from Hervé Niquet and his Flemish forces.

The second disc of choral music demonstrates some of the fruits of Gounod’s Italian studies including a gorgeous, unaccompanied Messe Vocale and a portentous, Berliozian Hymne Sacrée (inspired by Beethoven’s Ode to Joy as we are told in the insightful 150-page book that accompanies the discs). Best of all is the Messe de Saint-Louis-des-Français, a thoughtful and dramatic by turns mass setting for the church of the French community in Rome.

None of these works appear to have been recorded before and all are worthy of exploration, especially in performances as distinguished as these.

Composer of the month: Gounod

Feted in his own era, the French composer deserves to be remembered for more than the small handful of his works that are familiar today, says Roger Nichols.

Halévy’s follow up to La Juive rises at last from the dead.

The world’s first recording of an opera by the composer of Faust is a cause for celebration. Charles Gounod’s Cinq-Mars (1877) – about a 17th-century French nobleman who plots against Cardinal Richelieu – had a longer first run than Faust, was popular in the provinces – and then vanished, apart from the occasional recital of Nuit resplendissante by an enterprising soprano. Palazzetto Bru Zane, dedicated to the rediscovery of French musical heritage from 1780 to 1920, is fast becoming a rival for Opera Rara as a purveyor of luxury editions of little-known operas. This recording of a concert performance is a triumph of scholarship and makes a strong case for the opera. Like most of Gounod’s operas, the work exists in several versions, as the composer turned a historical opéra comique, with spoken dialogue, into a full-scale grand opéra, with sung recitatives and expanded numbers.  The libretto is undramatic, though based on a story which cries out for operatic adaptation: Cinq-Mars began as a protégé of Richelieu, became the favourite (read: lover) of Louis XIII, plotted with Louis’ queen and brother to overthrow Richelieu, and ended up on the scaffold. The French royals and Richelieu do not appear, while Cinq-Mars,…

Gounod’s Faust is the sort of opera that gives the genre a bad name. Its libretto is based on a play that takes Part 1 of Goethe’s original mystical morality tale and encrusts it with dowdy Victoriana and shifts the focus to the tortures inflicted on poor Marguerite whose eventual redemption hardly seems a fair consolation in today’s secular world; the lovely music coats a bitter pill that takes quite an effort to swallow.  Des McAnuff’s production attempts to restore some of the original’s dramatic gravitas by shifting the opening scene to the Los Alamos laboratories with Faust as a tortured atomic scientist. The arresting imagery during the overture gave an initial frisson so I looked forward to further clever analogies but apart from the obvious effects during the Walpurgisnacht they failed to materialise so the concept proved to be only half-baked. There were other fine visual moments such as the giant project images of Marguerite’s face but the unit set of Faust’s laboratory didn’t seem to be used to its full potential and my attention wandered.  Musically however, one couldn’t ask for more with a splendid cast of singing actors doing their best to sell the piece. Kaufmann is…

If there existed a prize for the World-Famous Composer Whom We Falsely Supposed We Knew, Gounod would win it at a canter. Take away Faust, the Funeral March for a Marionette (immortalised by Alfred Hitchcock), the Bach-derived Ave Maria, and how much Gounod have most of us heard? Singularly little. Even his Messe Solennelle and O Divine Redeemer, beloved during the early 20th century, have largely faded from general consciousness. Yet never fear, Hyperion is here, giving us not just utterly obscure Gounod pieces but an utterly obscure instrument: the pedal-piano (usually called pédalier in France and Pedalflügel in Germany), which once inspired enthusiasm in Schumann, Alkan, and Franck. Equipped with an organ-style pedal-board as well as standard piano keys, the pédalier emerged recently on an Olivier Latry disc where the tinny, clattering, bar-room sound largely defeated this reviewer. Hyperion’s pédalier has a much more attractive tone, and incorporates two Steinway grand pianos – the annotations explain the Rube-Goldberg-like procedures involved – to produce handsome results. Compared with a conventional piano, the timbre remains on the dry side. Nevertheless the outcome proves unfailingly musical, which chez Latry it assuredly was not.  No-one would credit this repertoire with consistent brow-furrowing profundity,…

This fascinating opera has had an uneven reputation from day one. Although Boito is better known as the brilliant librettist to Verdi’s last two masterpieces, Falstaff and Otello, he was also a composer of some standing, and Mefistofele was his magnum opus. It is the Faust legend, but done more flamboyantly and with a different dramatic emphasis than Gounod’s. Boito’s opera is a series of vignettes, with gaps between some scenes that do not always add up to a dramatic whole. In this opera, the character of Margherita is almost a sideshow. The main drama takes place between Mefistofele, Faust and God – as represented by a heavenly host, the chorus. By the final act and epilogue Margherita is long gone, leaving the stage to the three protagonists. It all works up to a wonderfully bombastic and exciting finale. Having seen a fine production of this opera in Vienna, I can attest to the work’s power on stage. Flawed it might be, but it is much more fun than Gounod’s Faust, and more dramatic. This live recording comes from the opera house in Palermo and is an effective enough performance from a good provincial opera house. The cast is uniformly…