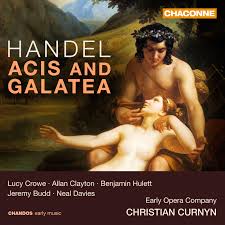 What a delectable cast Christian Curnyn has gathered for his new recording of Acis and Galatea. Lucy Crowe’s Galatea is joined by three outstanding British tenors – Allan Clayton’s Acis, Ben Hulett as fellow shepherd Damon, and Jeremy Budd as Coridon. Add go-to Handelian bass-baritone Neal Davies as Polyphemus and rising soprano Rowan Pierce to fill out choruses, and you have a baroque dream-team even before you get to Curnyn and his superb period orchestra.

From a crisp opening Sinfonia, crackling with gut-texture and energy, to a graceful closing chorus, Acis is served supremely well here. The plot – in which the carefree, pastoral love of Acis and Galatea is cruelly interrupted by the jealous giant Polyphemus – is slight, but its human details and emotional set-pieces come to vivid life here.

Galatea’s music often references birds, but Crowe is more cooing dove than twittering songbird – a womanly heroine, rich and warm in tone, at her best in As when the dove and her exquisite Heart, the seat of soft delight. Clayton’s Acis combines effortless legato wooing with heroic power, supported by Hulett, whose wirier, brighter tone is a natural foil. But, as highlights go, it’s hard to look past the sophisticated pantomime-drama of Davies’s O ruddier than the cherry, relishing the contrast between his craggy lower register and the piping obbligato of a sopranino recorder. Does it displace the Dunedin Consort’s 2008 account? Not quite, but it’s definitely a case of both/and rather than either/or.