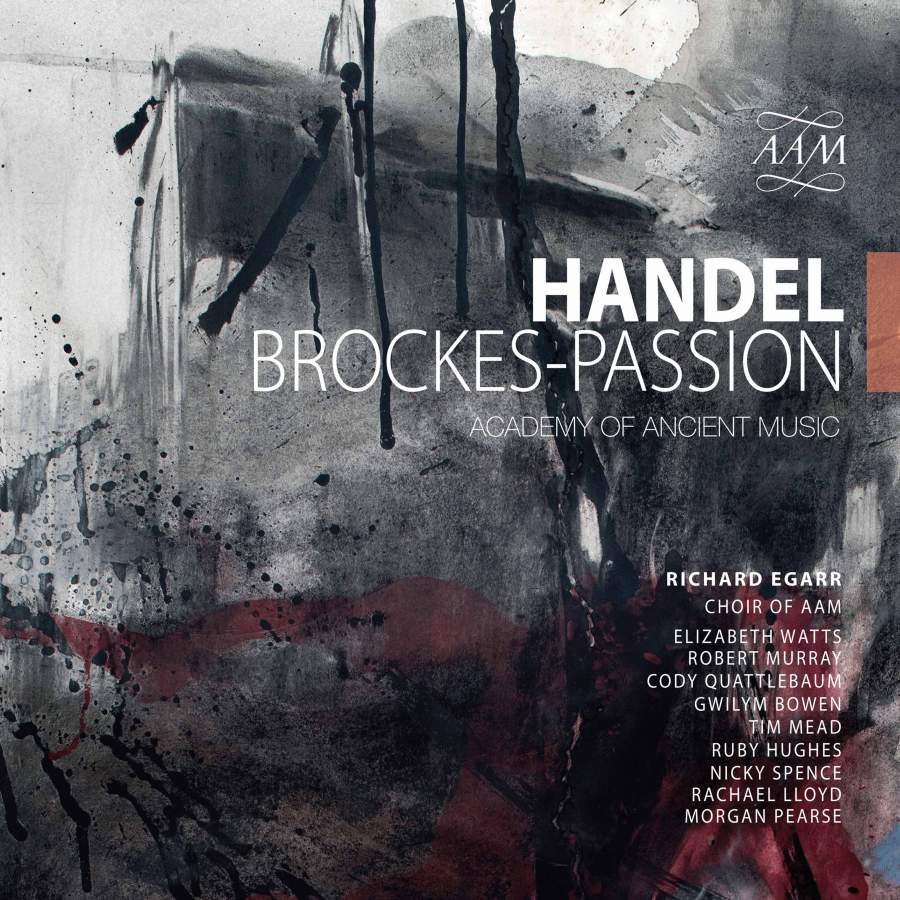 Whips, scourges, sinews, blood and pus: where Bach’s two Passions lament from a contemplative distance, Handel’s plunges right to the bone, to the cruel, tortured death that is the heart of the Easter story. Perhaps that explains the work’s recent neglect. But with this performance from the Academy of Ancient Music, as well as a brand-new performing edition by Leo Duarte, maybe the tide is finally turning.

Premiered 300 years ago, the Brockes-Passion – a setting of poet Barthold Heinrich Brockes’s popular Passion oratorio, which dissolves all four Gospel accounts into vivid if sometimes rather moralising poetry – looks on the Crucifixion with an opera-composer’s eye for drama. While Bach’s action emerges veiled, mediated through the Evangelist, no fewer than nine soloists give Handel’s narrative first-person immediacy.

Probably composed in 1715, some 15 years before Handel would turn his focus to oratorio, it’s an experimental work that binds together two separate but intersecting layers of drama: the action of Jesus, Judas, Caiaphas and Peter, and the reactive, contemplative responses of the Daughter of Zion and the Faithful Souls. The effect is of cutaways – the music cinematic in its swift repositioning, now zooming in close enough to see the sweat on Jesus’s brow, now stepping back to transform the bleeding stripes on his back into a rainbow. The lens even pivots directly onto the audience, heavily implicated and directly addressed by Brockes’ uncompromising text.

But it’s the tenors who really catch the ear, whether it’s Robert Murray’s Evangelist,  trumpet-like in his anger in Erwag ergrimmte Natternbrut, or Gwilym Bowen’s fallible, conflicted Peter, whose Nehmt mich mit turns shame into the loveliest of musical surrenders.

The AAM play elegantly for Egarr throughout, and a recording combining a live Barbican performance and several later sessions offers exemplary clarity and quality. Buy this account in physical form and you get a 200-page booklet complete with essays by editor Duarte, Dr Ruth Smith and Professor Joachim Whaley among others, all filling out this unfamiliar work’s rich context. It all adds up to an irresistible product that promises to put the end to Bach’s Easter monopoly.

Before there was Handel there was John Eccles and a truly English opera.

In this week's column, Angus McPherson looks at concerts by the Academy of Ancient Music, Ensemble Offspring and the West Australian Symphony Orchestra.

The English conductor on recording Handel's Brockes-Passion, Limelight's Recording of the Month in January/February.

Richard Egarr, Director of the Academy of Ancient Music describes Viennese composer Castello’s music as “utterly boundless in its virtuosity, imagination and colour, and would take anything we could throw at it in performance.” Well, he’s right. Although Dario Castello isn’t terribly well known these days since almost no biographical information about him has survived, back in the early 17th century he was celebrated across Europe with reprint after reprint of his Sonate Concertate. Subtitled in Stil Moderno (in the modern style), these unusual pieces live up to their description by including rapid-fire wind passages and sections that change mood at the drop of a hat. It’s a bit CPE Bach-esque in that Castello seems to delight in confounding both listeners and players with unexpected twists and turns. Castello realised that this sort of thing meant that the pieces were tricky to play but wouldn’t have any of it, writing that although the sonatas “may appear difficult, their spirit will not be destroyed by playing them more than once…this will render them very easy.” Helpful advice! There’s a focus on the winds here, with wind instruments appearing in solo form across a solid three-quarters of the disc. The flashy writing…

Watch: ACO live in the studio with Richard Egarr and Satu Vänskä

On the eve of their national tour, the Australian Chamber Orchestra give a sneak peek of their Golden Age programme.

It is interesting to compare this ensemble’s earliest recordings to their latest. You’ll note how their playing standards have soared and observe the evolution in stylistic practice over the past 50 years. Egarr’s approach is to use one player per part but offset the potential for lean asceticism by tuning down to French Baroque pitch (A=392). Although I still prefer the grandeur of massed strings, the result here is close to a best of both worlds rendition with the clarity of the chamber approach warmed by rich umber tones. There is also a conscious move away from breathless tempi to relaxed natural speeds that still move forward. Short cellular phrasing is replaced by longer flowing lines. These changes are unexaggerated so don’t expect the stodgy tempi of yesteryear’s non-specialists; Egarr’s choices are mostly ideal, although surely the Passepied I and II of BWV1066 could flow a little faster. The various Bourrée come across a little too leaden; more lift to the rhythms and a little more schwung would have done wonders and elevated this to the top of list. However, the excellent playing and characterful tonal colours are a delight in themselves. There are illuminating shifts of balance with Egarr’s…

Despite numerous recordings, it’s a rare treat to hear the composer’s original 1724 version of his St John Passion captured on period instruments. Richard Egarr directs some of Britain’s most stylish voices, accompanied by his own virtuosic musicians from the Academy of Ancient Music, on a journey through the arrest, trial, and crucifixion of Christ. Egarr approaches the latter of Bach’s two surviving Passions with great intensity, asserting his view of the work at an unforgiving pace. Simultaneous movements of choir and musicians are mechanically concise, with individual entries uniform in expression – a consistent sound that comes across as well planned and not at all impersonal. The tenor James Gilchrist’s Evangelist is a real highlight – his earnest recitatives are sung with a near-feminine gentleness – I indulged in every word with utter delight. Matthew Rose and Ashley Riches give reliable performances as Jesus and Pilate, while Sarah Connolly’s arias are sung with seemingly as little effort as would be required for the spoken word. The program notes boast a “more muscular” version, and with instruments and voices combined it rarely disappoints. The articulation of the biblical text sometimes gets lost in the richness of the choral sound, but it’s…

When Heifetz told Schoenberg that he could not possibly perform the latter’s Violin Concerto unless his own left hand were to acquire a sixth finger, the composer allegedly replied: “I can wait.” Perhaps a similar sentiment governs the harpsichordist confronted with Handel’s decidedly tricky solo pieces.  On paper they might not look overpoweringly difficult; but often they fall awkwardly under the hands, in a manner which Richard Egarr’s impressive booklet essay compares to Brahms’ pianistic style. At least the piano has a sustaining pedal to help out with polyphonic interplay (Glenn Gould, Sviatoslav Richter and Andrei Gavrilov all tackled these works). No such luck with the harpsichord. Besides, stylistic problems – greater than anything in Bach’s English Suites or French Suites – also bedevil the player. How Handelian should they seem, given that their free-and-easy preludes echo the French clavecinistes, and their intricate counterpoint passages do not resemble much in the oratorios or concerti grossi? Altogether it is unsurprising, if regrettable, that (except for everybody’s favourite movement, The Harmonious Blacksmith concluding Suite No 5) this music has been traditionally underestimated. Egarr’s curiously frivolous interpretations seem to me unlikely to win converts. The man has technical brilliance to burn, but he rarely…

Review: Birth of the Symphony (Academy of Ancient Music/Egarr)

Richard Egarr sets out to push boundaries while staying within the confines of historically informed music-making. Here he’s got our limited concept of the symphony in his sights, and has put together a program that demonstrates the enormous diversity and rapid development of the genre from Handel to Haydn. It’s an instructive journey: already you can hear the germ of the symphony in the Sinfonia from Handel’s oratorio Saul (1738), while the Grande Simphonie No 7 by Franz Xavier Richter (c.1740) and Stamitz’s Sinfonia in D (c.1750) demonstrate the stylistic and technical revolutions that were taking place at the famed Mannheim Court at the time.  Mozart’s Symphony No 1, composed when he was just eight-years-old, reflects not only the influence of Mannheim but that of JC Bach; finally, one of Haydn’s masterpieces, the Symphony No 49 (La Passione) epitomises the Sturm und Drang style of sharply contrasting extremes of emotion, thus prefiguring Beethoven. The AAM are perfect advocates, their playing crisp and light yet virtuosic and given to extravagant gestures where the musical rhetoric demands it. This is most evident in the Mannheim works, where the loudest fortissimo and the quietest pianissimo are rendered with painterly skill amid a hail…

Early music royalty in a program of English music to raise the spirits.