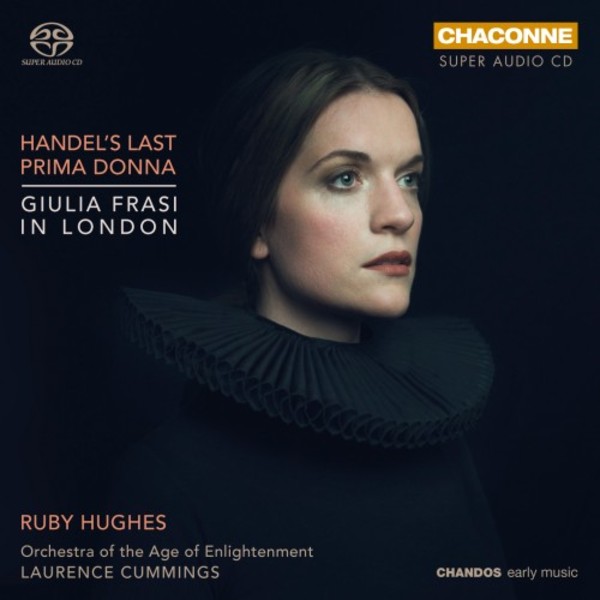 English soprano Ruby Hughes is the latest to record an album of works written for a past singer, in this case Giulia Frasi. Much of what’s here is tastefully done, with careful attention to the score and a sense of overall polish. But there’s much room for Hughes to extend herself interpretatively, with many selections given the right emotional tenor but with little imagination. The owner of a bright, mellow instrument without much tonal variation, her soprano can make for monotonous listening, but it’s ideal for those arias that require simple, unaffected singing.

Highlights include Why is Death for Ever Late from Arne’s Artaxerxes, where Hughes’ excellent diction, firm sense of line and attractive timbre come into their own. Equally effective is the opening track, Crystal Streams in Murmurs Flowing, which shows off a solid middle voice, surprising for a soprano that seems to find its sweet spot in higher-lying music. She also does some lovely piano singing here, introducing a welcome wistfulness to Susanna’s aria.

Less successful is a suite of arias from Theodora, which requires a singer with a greater sense of drama. Hughes sounds too much like an innocent beset by difficult circumstances, rather than a woman with strong principles who has chosen her fate with open eyes. This same placidity undermines Will the Sun Forget to Streak, sounding inappropriately girlish for the Queen of Sheba. A solid effort, but a ways to go.

Are the heroines of the title the female narrators of these songs and arias, or are they the composers – women including Claudia Sesa, Barbara Strozzi, Francesca Caccini and Lucrezia Vizzana – who surmounted impossible challenges to give voice to their music? They are, of course, both, and it’s a combination that makes for a charged programme. A natural storyteller never afraid to paint period music in rich hues, soprano Ruby Hughes delights in the expressive details of Strozzi’s arioso-like L’Eraclito Amoroso and Lagrime mie. Both are closer to opera than chamber music, the latter opening in a prescient clatter of chromatics. If Hughes takes risks, they only match those of the music. Sesa and Vizzana represent the women confined to convents, for whom music was a rare emotional and expressive outlet. Sesa’s Occhi io vissi di voi has all the erotic spirituality of Teresa of Avila’s writings – a love-song clothed in vestments, and while Vizzana’s O Magnum Mysterium is more restrained, the contrast of the chromatic wounds of the verse to the consonant balm of the Alleluia is a poignant as it is sophisticated. Leavening the vocal music with a thoughtful selection of instrumental works, Jonas Nordberg and Mime…