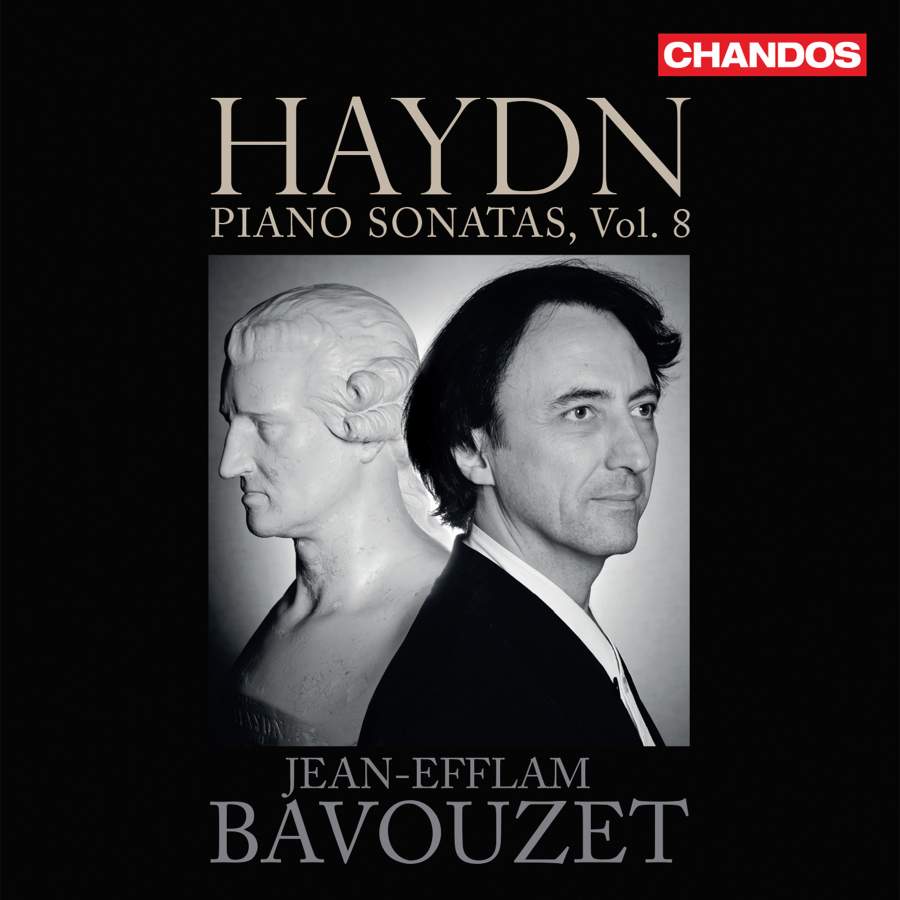 After forays into Mozart concertos and Schumann solos, Jean-Efflam Bavouzet is back with the latest volume of his magnificent survey of the Haydn keyboard sonatas – this is number eight, with two more to go. Considered Sir Georg Solti’s last discovery, the prolific 56-year-old Frenchman averages three new albums a year, and combined with his busy program of recitals and concerts he must barely get up from the piano stool.

For this latest offering he takes works from three critical periods in Haydn’s life. Having left his village at the age of six to live with a cousin who was a choirmaster, the composer sang in the choir of St Stephen’s Cathedral in Vienna until he was dismissed after his voice broke.

To make ends meet at 17 he taught harpsichord and some of his earliest sonatas were written for his pupils. These include Nos 5, 6 and 7 – all quite charming and uplifting – which are performed with a sense of affection and delight here by Bavouzet.

The Sonata No 51 in E Flat, which Bavouzet uses to break up the early works, falls into the second critical stage of Haydn’s career. In 1778 he had been working for Prince Esterhazy for 17 years in virtual isolation 100 kilometres from Vienna. His works had been published in London, Paris and Amsterdam, often riddled with mistakes and without any money coming in.

He decided to take control and when Carlo and Francesco Artaria opened a publishing business in Vienna Haydn’s fortunes changed. Now he could send corrections and have some control over his intellectual property.

The third momentous turn in his life came when he was befriended by Maria Anna von Genzinger, a mother of six and accomplished pianist and singer who was married to Esterhazy’s doctor. The couple ran musical afternoons and invited Haydn, who had been unhappily married, to perform and thus gave him his very first taste of a happy family life.

He dedicated his Sonata No 59 (often called the Genzinger) to Maria Anna, and it has become one of his most performed piano pieces. Bavouzet does it full justice on this disc, giving a magisterial reading of this gem from the Age of the Enlightenment.

This top-notch disc is filled out with the delicious Adagio ma non troppo, an original version of the slow movement of the Piano Trio No 36, and the variations on the Austrian anthem Gott Erhalte.

Six volumes into Jean-Efflam Bavouzet’s tour through the complete Haydn Piano Sonatas, listeners will have a pretty good idea of what to expect. Neither Bavouzet nor his instrument (a contemporary Yamaha concert grand) are particularly interested in authenticity. Instead you get a witty, urbane, slightly French-accented take on repertoire that has long cried out for a contemporary champion. This is Haydn for, and of, a new generation. Wisely ignoring chronology, each volume is a musical lucky dip, throwing together a diverse grouping of works. Volume Six is built around the spacious Sonata in B Flat Major, No 11. Gone is the limpid Bavouzet of his Debussy recordings, and in its place an assertive, rhetorical voice whose lines emerge with such clarity that the effect is of a piano reduction of a comic operatic ensemble. The more sedate E Flat Major Sonata No 43 feels, by contrast, rather anonymous, despite Bavouzet’s frisky ornaments. This gives way with calculated shock to the expansive grace of the central Minuet and Trio. Bavouzet makes his slow movements sing in silky tone and legatos, but it’s the livelier, comic movements where he really comes into his own. I defy anyone to listen to the irrepressible…

Jean-Efflam Bavouzet has arranged his cycle of Beethoven piano sonatas chronologically in order of composition, meaning this final instalment encompasses the biggest of Beethoven’s hitters: the Appassionata, Hammerklavier and Opus 109, 110 and 111 included. I think it’s fair to say that Bavouzet’s approach has divided opinion. If Artur Schnabel or Emil Gilels are your go-to Beethoven pianists, then Bavouzet’s lean-and-mean textures – apparently achieved with a minimum of pedal, and fingers so transparent that they must be see-through – locate other impulses inside this music which might not appeal. Known primarily as an interpreter of Debussy and Ravel, Bavouzet views Beethoven as not just a progressive, but also a Modernist. This Beethoven is determinately non-sentimental (as already demonstrated by Bavouzet’s chilling, near-dystopian take on the Moonlight Sonata in volume 2 of his cycle) with a knack of clarifying form by emphasising moments of fracture. Bavouzet clearly follows a lineage of French Beethoven that begins with Yves Nat and hits peak chichi streamlined Modernism as Pierre-Laurent Aimard records the concertos with Harnoncourt. Except that Bavouzet remains his own man. So much to enjoy here, so much that makes me want to listen again. Perhaps perversely I began my deep dive…

French pianistic powerhouses Jean-Efflam Bavouzet and François-Frédéric Guy have teamed up to deliver a mega programme of works originally intended for orchestra. First premiered in 1913, all three are heard in piano form, with the shift in perspective providing new insights into the music while testing pianistic skills.  The first of Bartók’s Two Pictures sees washes of lush, whole-tone harmony and strangely winding melodies, conjuring a gorgeous, almost Debussian dream world.  The reverie is over in the second picture, Village Dance. Here, Bartók indulges in heavy harmonic dissonance and exuberant folk-like melody, delivered with full force.  The tone colour of Debussy’s Jeux comes as a soothing and gentle contrast. Bavouzet and Guy manage to make their instruments sound as colourful as Debussy’s orchestra. The opening is so delicately rendered you’re left questioning if it is indeed a piano you’re hearing. Bavouzet’s transcription is an intelligent and elegant reimagining of the original.  Stravinsky’s Rite of Spring is the best-known work on the disc, and hence its transcription is perhaps the hardest sell. Piano four hands necessarily restrains the score’s savagery and contrapuntal melodic webs. While it might not best the original, the composer’s own transcription is the perfect vehicle for this…

★★★★☆ “Stravinsky belongs to that group of composers whom we admire first and foremost for their intellect…  but it would be a mistake to believe that this intellectual admiration excludes emotion.” So writes pianist Jean-Efflam Bavouzet in the note to his terrific new recording featuring Stravinsky’s works for piano and orchestra and which appeals to the heart as much as the head. Bavouzet won awards last year for his recording of the Prokofiev Piano Concertos. Here, joined by a very much on-form São Paulo Symphony Orchestra under the suave, alert direction of Yan Pascal Tortelier, he again demonstrates his affinity for genuine orchestral collaboration while submitting to that lapidary yet rhythmically vital realisation of line and texture so important in Stravinsky’s music. The Concerto for Piano and Wind Instruments has never sounded more like a multi-coloured riot of tessellation across which drift occasional shadows. The following Capriccio is also pure delight, Bavouzet’s playing shot through with a sparkling lyricism that he even manages to inject into the 12-tone Movements. And if the piano in Pétrouchka is merely a member of the orchestra, Bavouzet nevertheless relishes his role in contributing to one of the tightest yet most theatrically lavish performances of…