Complimenting the offerings from Western Australia’s more established arts companies, the last five years have witnessed a growing number of entrepreneurial musicians creating opportunities for themselves by forming small-scale arts companies and chamber ensembles. Through thoughtfully curated programs, new commissions and inter-arts collaborations, these groups are reaching new, and often younger, audiences. Bonnie de la Hunty is a lyric soprano and is a key player in this scene, most noticeably through her Baroque music ensemble HIP Company. This concert, however, sees her move from the 18th century to the present day in an imaginative program for soprano and string quartet. Lasting a little over 50 minutes, with no interval, seven works were presented. Three of them, André Previn’s Vocalise, Elena Kats-Chernin’s Eliza Aria and Samuel Barber’s Sure on this Shining Night were skilfully reworked by de la Hunty for voice and string quartet. Whilst I occasionally missed the fundamental bass in Previn’s Vocalise, this was compensated by Krista Low’s beautiful cello playing. The Barber shimmered suitably and Kats-Chernin’s iconic work delighted in yet another version. 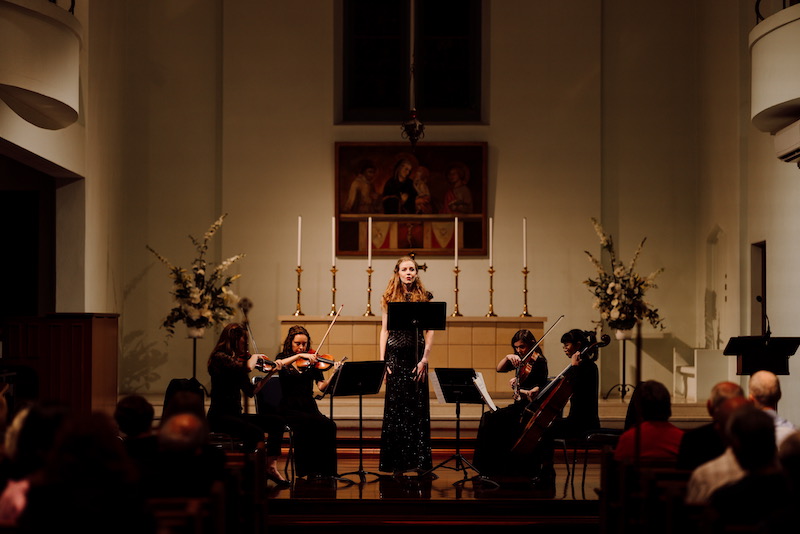 The centrepiece of the program was a newly commissioned song cycle for soprano and string quartet by Cara Zydor Fesjian. Born in New York and currently working in Los Angeles, Fesjian spent several years in Western Australia during which time she composed several distinctive works. Fesjian’s song cycle is in three movements and draws on texts by Emily Dickinson, Wordsworth and Virginia Woolf. The suitably transcendental opening lines of the outer movements “I’m Nobody, Who are you?” and “What is the meaning of life” clearly inspired Fesjian to create deeply-felt music of meaning and intensity. Invoking the essence of Copland and Barber’s expressivity, for example in relation to the high-set string writing and the natural rhetoric of the vocal line, Fesjian’s music nevertheless speaks with an assured original voice. The second movement features the juxtaposition of live music with pre-recorded tape. The interplay of organum-style drones from the strings and tape was very effective, so too was de la Hunty sprechstimme delivery of Wordsworth’s Daffodils offset against textual fragments from Kafka, Plato and Eliot on the tape.

Notwithstanding some balance issues and several missed opportunities for modulating the colour and sound, Jasmin Parkinson-Stewart (violin), Jane Cameron (violin), Alix Hamilton (viola) and Krista Low (cello), played with conviction and impeccable intonation. They played by themselves in a movement from a string quartet by Philip Glass and in another premiere from Fesjian.  Loom is a short single-movement work, in part inspired by Ravel’s string quartet. In turns active and contemplative, it further demonstrates Fesjian’s technical fluency and her ear for narrative and form.

De la Hunty, the driving force behind this project, is to be commended not only for her exquisite singing but also for her perceptive artistic vision. The curatorial care over the programming saw the emergence of several sub themes: a glance backwards to America; an evocation of the numinous through two bookending vocalises and a visceral acknowledgment of the times were are living through, and how art may help us now and in the years ahead.  In the program note Fesjian asks “how do we find beauty in navigating through crisis?”.  The artistry and creativity evidenced in this performance is surely part of the answer.

Another generous helping proves that when it comes to women composers, Australia has always been a leading light.

Review: Women of Note: A Century of Australian Composers

Perfect compilation proves Aussie sisters have been doing it for themselves for a century.

Partying in a dorm in the Soviet Union meant singing chorales. So how will the much-loved composer celebrate her ‘second 30th’?

“Art destroys silence”: Shostakovich’s powerful condemnation of anti-Semitism is as relevant as ever.

Elena Kats-Chernin on making it up as you go along

The composer will combine her twin passions for music and art, only this time entirely without the aid of manuscript paper. Continue reading Get unlimited digital access from $3 per month Subscribe Already a subscriber? Log in

Fragmentation and a French quartet continue the revolution.

The composer’s seven-year-old promise, with some vocal help from Anna Dowsley, helps author Susie Bennetts. Continue reading Get unlimited digital access from $3 per month Subscribe Already a subscriber? Log in

Editor’s Choice: Instrumental, August 2016 Among the 31 (mostly) short pieces on Butterflying is Lullaby for Nick, an adult embellishment of Elena Kats-Chernin’s first composition, written at age six. Lyrical and wistful, it is a fascinating early manifestation of the prodigious talent that developed into the powerhouse that she is today. This new double CD is a selection of music composed for her first instrument and love, piano, and on which she teams up with a fellow virtuoso who also began her musical career as a child prodigy. Tamara-Anna Cislowska gave her first public performance at two, playing Bartók, commenced studies at the Sydney Conservatorium at six and won the ABC Young Performer Award in 1991 at 14, the youngest ever winner. Although Cislowska’s repertoire spans five centuries, she has come to be particularly associated with contemporary Australian composers, winning an ARIA Award in 2015 for her ABC recording of Peter Sculthorpe’s Complete Works for Solo Piano. Ten years in the making, that project involved extensive collaboration between performer and composer; so too did Butterflying.  In Cislowska, Kats-Chernin has found the perfect transmitter and musical partner who combines technical prowess with a particular depth of understanding for these works: they…

The two long-term collaborators take us behind the scenes of their new double disc. Continue reading Get unlimited digital access from $3 per month Subscribe Already a subscriber? Log in