War drives people mad. How are they to cope once the fighting stops? Who will look after them?

Hayden Tee’s fierce staging of Jekyll and Hyde takes on these ideas with a passion. The setting is now a post-World War II military hospital, a bare box of a space decked out in dingy green and dull cream in Melanie Liertz’s evocative design. The action becomes a play within a play as patients and staff enter into a kind of collective enterprise of remembering and retelling traumatic events. 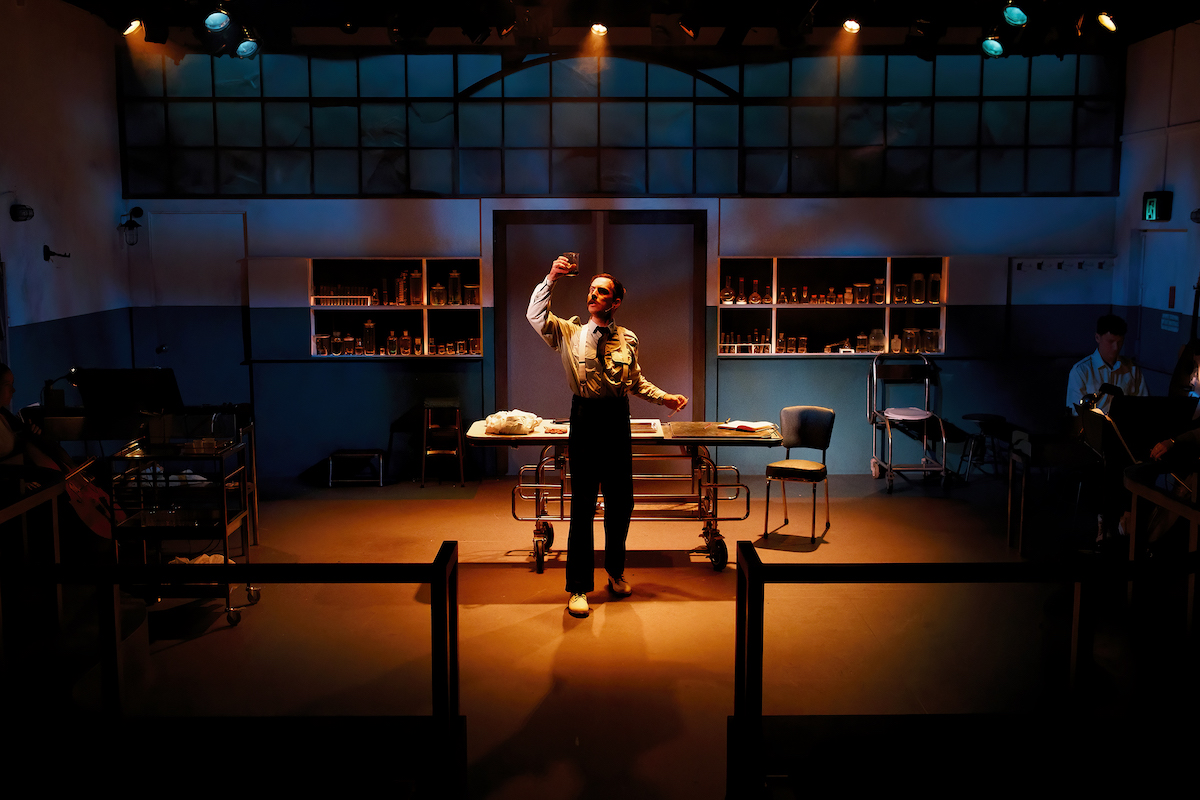 It isn’t easy to work out who the damaged ones are and who are those tasked with their care; it’s impossible to tell what is real and what is not. Identities are slippery and the atmosphere nightmarish as people move in and out of character.

The underlying story is unchanged. Seeking a cure for his father’s madness, Henry Jekyll (Brendan Maclean) attempts to separate good from evil and in the process creates his murderous alter ego Edward Hyde. In the context of Tee’s production this works as metaphor rather than theatrical reality, something that helps paper over a few cracks. The choreography (Siobhan Ginty) is too frenetic early on and the way the piece is built around Jekyll’s lawyer friend Utterson (Madeleine Jones) isn’t entirely convincing.

When it works, and it mostly does extremely well, Jekyll and Hyde is a fascinating excursion into fractured minds. Maclean might be considered counter-intuitive casting in the title roles but is transfixing. It’s the tiniest moment, but as he starts the process of transformation, Maclean as Jekyll speaks of a “slight feeling of euphoria”, at which he gives a weird and extremely disturbing little giggle. His is an edgy, risky Jekyll, deathly pale and hollow-eyed from the start. The deeper-voiced Hyde looks like a parody of a surgeon, scarily gleeful when despatching his despised opponents and chilling when disposing of Lucy (Brady Peeti), the prostitute befriended by Jekyll. 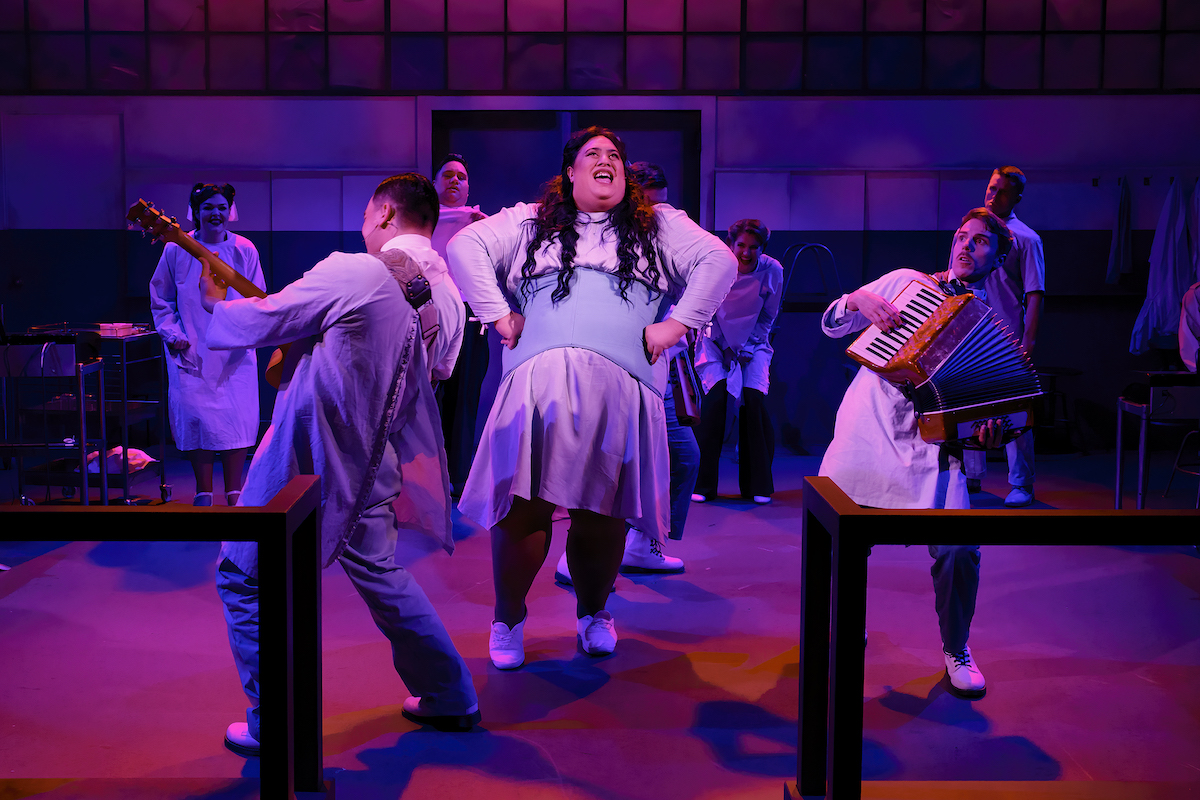 In another casting coup for Tee, New Zealander Peeti is an extraordinarily touching Lucy. Even as she does her sleazy nightclub act Bring on the Men, Peeti sings with a powerhouse voice that doesn’t hide the vulnerability beneath, fully revealed in Someone Like You. Lucy also has a kind of alter ego in Emma (Georgina Hopson), here not just Jekyll’s fiancée but a doctor in the hospital. Hopson’s glorious soprano glows in Take Me As I Am and together she and Peeti, their very different vocal qualities contrasting dramatically, make one forget the inherent submissiveness of the lyrics of In His Eyes.

Tee’s concept is a long, long way from the glossy Broadway-style bombast – vastly enjoyable, but not exactly subtle – that’s written into Frank Wildhorn’s score. As originally orchestrated it is big, it soars, it hits the high notes at the right moments, there are tear-jerkers and huge statements of intent. It’s unabashed melodrama.

In scaling it down for the Hayes, orchestrator and musical supervisor Nigel Ubrihien has created a thing of great beauty and dramatic potency. Two cellos, played on opening night by Olivia Wilding and Sally Schinckel-Brown, are the glorious human voice of the piece. They are supported by two keyboards and instrument-playing actors including Mitch Roberts on electric double bass, a marvellously pared-back instrument with all the grunt of the bass and none of its unwieldiness. Transparency, intimacy, nimbleness and eloquence are all there.

Take, for instance the treatment of Jekyll’s This is the Moment, in which he decides to experiment on himself. Maclean starts quietly and reflectively, the ensemble sings a delicate a cappella vocalise in support – and the effect is magical. In fact, there isn’t anything in the score not enhanced by Ubrihien’s orchestrations. 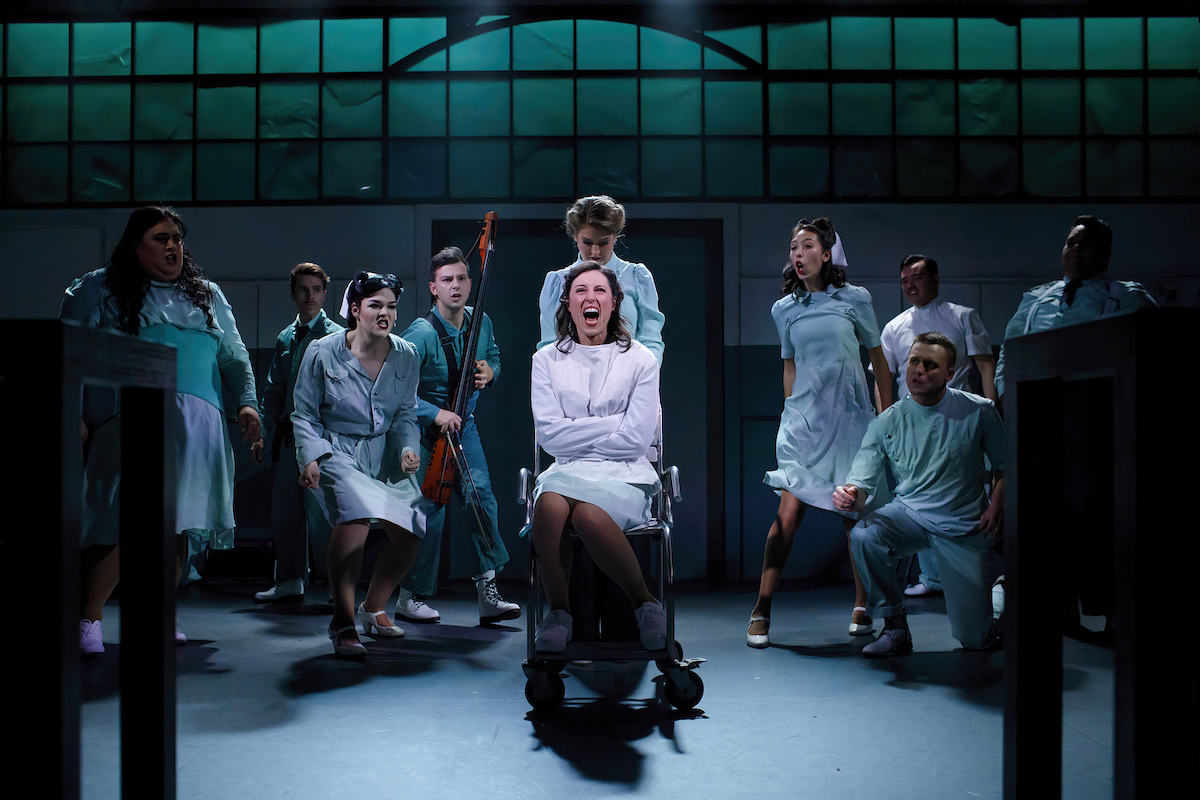 Jekyll and Hyde comes to the Hayes as part of its Artist Led Program, in which productions are pitched from outside the organisation. It’s succeeded in getting to the stage where much larger ventures have failed, including an abandoned 2015 joint venture between Opera Australia and producer John Frost. (The 25th anniversary of the fabled double concept album starring Anthony Warlow was marked by semi-staged concert performances in Melbourne and Sydney in 2019.)

A big production will have many months of preparation, a small one like this not so much. That shows in a number of ways, particularly in Utterson’s not fully realised role as driver of the action. Jekyll and Hyde is, nevertheless, a considerable achievement.