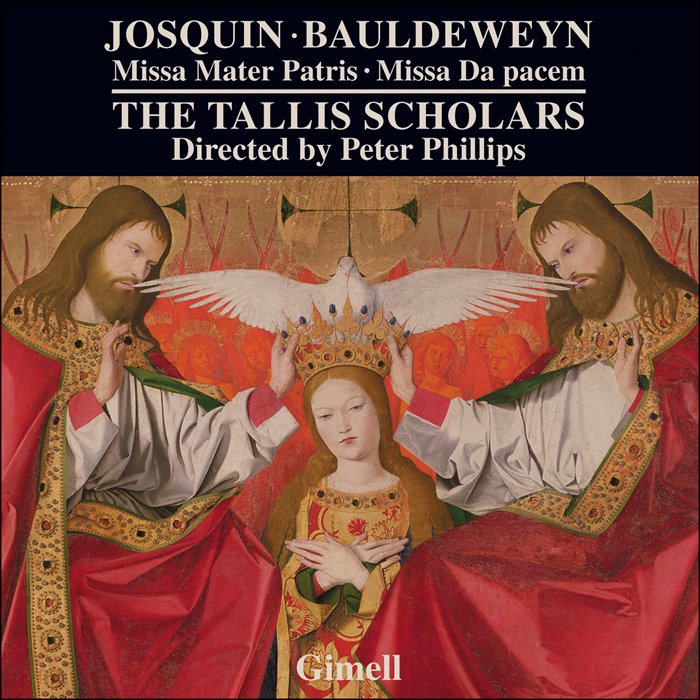 It’s been an epic journey, but one that is drawing to a close. Peter Phillips and The Tallis Scholars’ traversal of Josquin’s Masses has now hit some conundrums. The Missa Mater Patris (based on a motet by Brumel) exhibits a stark simplicity that led scholars to believe it was an early work, but now its simplicity is thought to be more a display of masterly technical refinement rather than an expression of emerging talent. More quizzical still is the Missa Da Pacem, thought in the 19th century to be the perfect distillation of the master’s art, yet now believed to be by the little-known Flemish composer, Noel Bauldeweyn.

Whether Missa Mater Patris is early or late, Phillips and his singers communicate Josquin’s passionate response to Brumel with luxurious tone and beautifully shaped melodic arcs, particularly in the third Agnus Dei, which is like a flower opening in an arid landscape. By contrast, a jaunty Hosanna also reveals a lightness of touch.

Missa Da Pacem is a far more elaborate polyphonic edifice, with some inspired writing which has led Phillips to believe that the Et incarnatus and the third Agnus may indeed be by Josquin. While these works will cause continuing scholarly speculation, one thing is certain – that Phillips and his singers are ardent advocates. Once again, the clear but comforting acoustic of Merton College, Oxford aids their endeavour. Whoever the composer, this music is certainly worth listening to.

Scholars deliver the crowning glory of a Herculean labour of love.

The final program in 150 Psalms demonstrated the excellence, precision and mastery of all singers involved.

Pristine singing, but does it fulfil the project's aims?

Move over John Cage and Henry Cowell. Chance music, it seems, existed long before last century. How surprising and intriguing to discover that the roll of the dice may well have determined the compositional method of a Mass that could have been written by the great polyphonist, Josquin des Prés. (Josquin was employed by the Sforza family, some of the biggest gamblers in 15th-century Milan.) Movements of the Missa Di Dadi (Dice Mass) are preceded by images of dice showing different numbers. These indicated to the tenors the proportional length of the base melody (a chanson by Robert Morton) to the other parts. As Peter Phillips points out in his engaging notes, these indications are a bit haphazard and fortunately the publisher (presumably not a gambler) wrote out the actual tenor part to avoid confusion. While all of this is quite amusing – and despite not knowing for certain the Mass is by Josquin – the music is certainly worthy of attention. The customary precision and blend of The Tallis Scholars is in evidence throughout, but the final Agnus Dei is particularly moving. Missa Une mousse de Biscaye also lacks firm evidence of authorship by Josquin. Based on a secular…

The Tallis Scholars in Antarctica? It’s not as crazy as it sounds