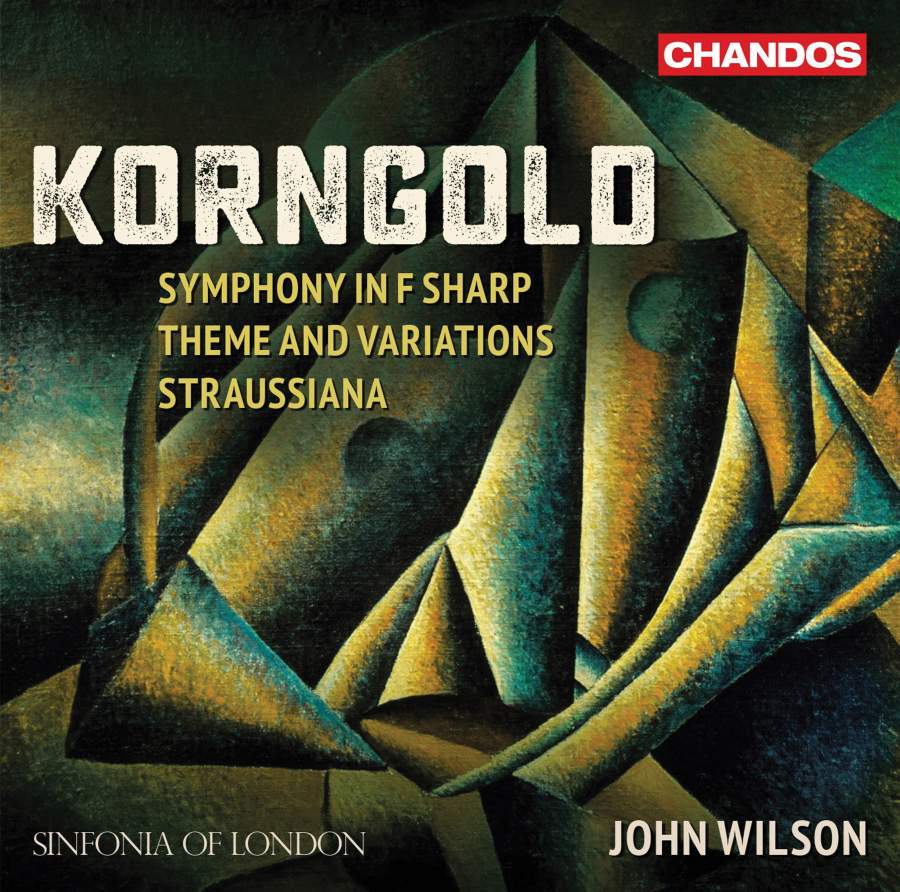 Erich Wolfgang Korngold (1897-1957) was as remarkable a child prodigy as Mozart and Mendelssohn. He wrote his Sinfonietta (a full-scale symphony in size and scope) at the age of 15. His highly successful grand opera Die Tote Stadt (The Dead City) premiered when he was 23. He moved to Hollywood to work with the director Max Reinhardt on a 1935 film of A Midsummer Night’s Dream (featuring a teenage Mickey Rooney as Puck), enjoyed the lifestyle, and stayed there throughout the war.

Korngold’s post-Romantic Viennese style proved ideal for the swashbuckling epics of Errol Flynn and he established himself as a major film composer, winning two Oscars, for Anthony Adverse in 1937 and The Adventures of Robin Hood in 1939. After retiring from studio work in 1947, he wrote concert music (sometimes adapting themes from his film scores), but his serious music by then sounded anachronistic. He died in Los Angeles at 60, after a stroke.

The three works on this disc from John Wilson come from late in Korngold’s career. His Symphony in F Sharp (1947-1952) is a substantial, four-movement piece. Its punchy first movement is followed by a dazzling scherzo, while the finale is celebratory. The slow movement finds the composer at his most atmospheric and ‘filmic’.

A flop at its premiere, the work was forgotten until Rudolf Kempe rediscovered it and recorded it in Munich 20 years after Korngold’s death. There have been several recordings since, including one by André Previn and the LSO. Wilson’s vies with the best of them. His Scherzo zips along at a swifter rate than any of the others, and the slow movement’s heart-on-sleeve Romanticism is right up his alley.

The Sinfonia of London, an ensemble resurrected in 2018 by Wilson solely for the purpose of recording, plays with heart and plenty of panache when required. Chandos’s sound is an asset, as always: warm, uncluttered and spacious.

The smaller works are fillers, but enjoyable ones. The delightful Theme and Variations (Korngold’s final composition) was commissioned for a school orchestra, although typically the composer did not go out of his way to make it easy. The theme, first heard on flute, is a gentle, pastoral melody that Korngold puts through its paces effectively. Straussiana is his arrangement of three pieces by Johann Strauss II: Polka (which is pizzicato, but not ‘the’ Pizzicato), Mazurka and of course a Waltz. Korngold’s glittering orchestration makes them sound more Hollywood than Vienna, bringing a fitting conclusion to a fine program.

The British conductor talks about his latest release, which is Limelight’s Recording of the Month in May, a collection of moreish French lollipops but also much, much more.

David Robertson's Mahler Five suggests just how much the SSO has assimilated Mahler into its DNA.

The best of all possible Bernstein tributes.

The 80-year-old pianist curates his special favourites across a long career.