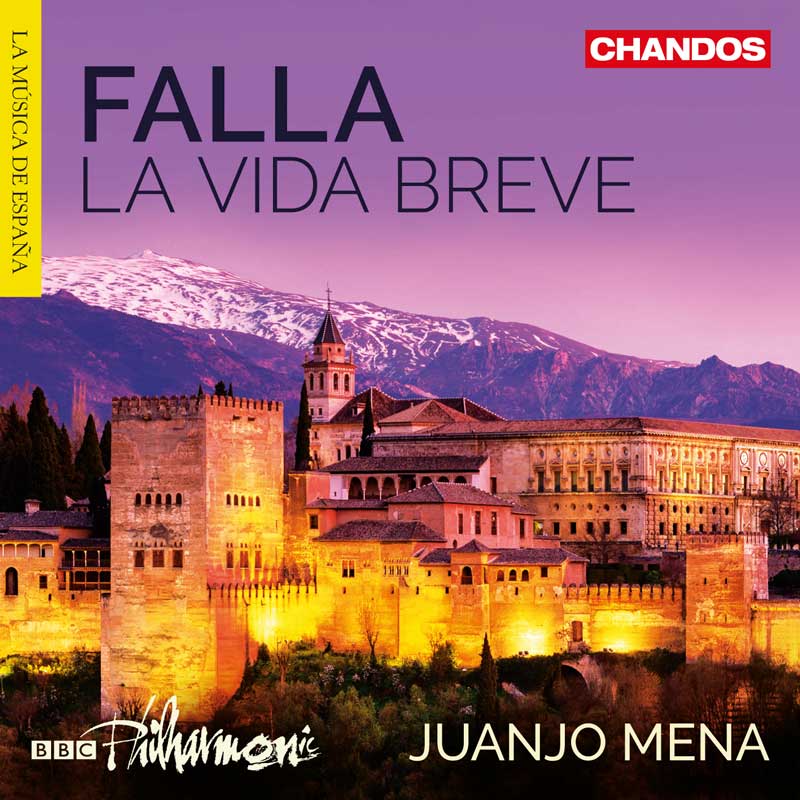 La Vida Breve was the breakthrough work for Manuel de Falla; composed before he moved to Paris where none other than Debussy urged him to revise it for performance, smoothing the transitions from number to number. The combination of local Andalusian colour, dance and verismo social comment was very much of its time but the need for specialist performers, brevity and dramatic implausibility have kept it a rarity on the stage.

The plot concerns an infatuated gypsy girl called Salud who is jilted by the caddish Paco who marries for social advancement – Salud gatecrashes the wedding party and drops dead at his feet. The pacing is off-kilter, an expansive opening building the tension for the party scene with flamenco song and dance, but the final denouement is so sudden – blink and you’d miss it and then the curtain is down!

However, there is some memorable music to be found with some marvellous moments anticipating the composer’s mature style. This latest installment in Chandos’ survey of Spanish music makes a fine addition to the work’s discography. I admired Mena’s previous release of Falla’s masterworks so his refined ear and idiomatic flair pays dividends here, aided and abetted by superb recorded sound – the haunting opening with offstage men’s chorus ideally balanced and the anvils for once sound convincing.

The polished wind and brass of the BBC Philharmonic does justice to Falla’s marvellous orchestral effects although I would have liked a more brazen response from their rather buttoned-up strings. The imported chorus and Latin cast sound suitably authentic while sensible restraint governs the dance segments with minimal clatter. The flamenco singer may well be genuine but painful.

Nancy Fabiola Herrera made quite an impression in Australia a few years ago as Carmen and makes a fine Salud, her particular dark timbre ideal. A fine modern recording although the 1965 EMI release remains the benchmark.

An intriguing Australian premiere with assured accounts of old favourites.

An utterly captivating and delightful experience that deserved a longer season.

Tan Dun's bird-themed jamboree kicks off The Year of the Rooster in style.

Bernarda Fink has a vibrant mezzo-soprano voice and the sense of style to interpret this program to the manner born – which, despite her surname, she was. The daughter of Slovenian parents, she was brought up in Buenos Aires. Her repertoire includes Baroque music and mainstream German and French song, but this Spanish recital does not come out of the blue: it follows an earlier release of Argentinean songs from 2006. The diverse program, which includes many rarities, concentrates on three of the four masters of 20th-century Spanish song. (The missing one is Joaquín Turina.) It opens with Falla’s well-known Seven Popular Spanish Songs, and straight away Fink reveals her strengths: a strong chest voice for Andalusian declamation, the ability to float her warm tone at the top of her register and an understanding of the emotional terrain that allows her to hold nothing back in this spirited, heart-on-sleeve music. Rodrigo’s gentle Adela  follows, the first of his Tres canciones españolas, and here Fink presents a beautifully poised cantilena against the simple accompaniment, rendered with style by American pianist Anthony Spiri. Rodrigo’s songs tend to be spare in texture, Granados’s popular Tonadillas notable for their elegance, while Falla remains the most earthy. Throughout,…

Martha Argerich’s annual festivals at Lugarno give young artists a chance to perform with older, more established musicians and to explore the byways of chamber music. This 3-CD set comes from the 2009 Festival. All the music is capably and sensitively performed. Argerich, of course, is a renowned artist and the Capuçon brothers, Gautier, the cellist, and Renaud, the violinist, are also well known. Other, newer musicians, who are worthy of note are the pianists Lilya Zilberstein and Khatia Buniatishvili. Because 2009 was the anniversary year for Schumann and Mendelssohn, both these composers are featured. Mendelssohn’s Piano Sextet, written at the same time as his Octet and the Overture to A Midsummer Night’s Dream, is a pleasant enough piece, if somewhat garrulous, but it cannot hold a candle to those other masterpieces. Schumann’s Fantasiestücke for piano, cello and violin, are also hardly amongst his greatest works. The virtually unknown Sextet in E flat by Glinka is also a work worthy of an occasional hearing, but contains nothing of the Russian nationalist traits for which he became famous. For me, the most interesting work was Bloch’s Piano Quintet No. 1, whose quality makes one wonder why his music is not heard more…