eBay might not be the most likely birthplace for a recording of 17th-century French harpsichord music, but that is exactly where Christophe Rousset’s latest project began. The French harpsichordist and conductor’s interest was piqued by a misidentified handwritten manuscript he spotted on the online auction site in 2004, whose true musical worth he only realised once it was in his hands. He became the proud owner of a collection of Baroque music that ranged from the famous to the unknown, from keyboard transcriptions of Lully opera excerpts to rare unpublished preludes. And the volume’s dedication posed a tantalising mystery: who was Madame Théobon? 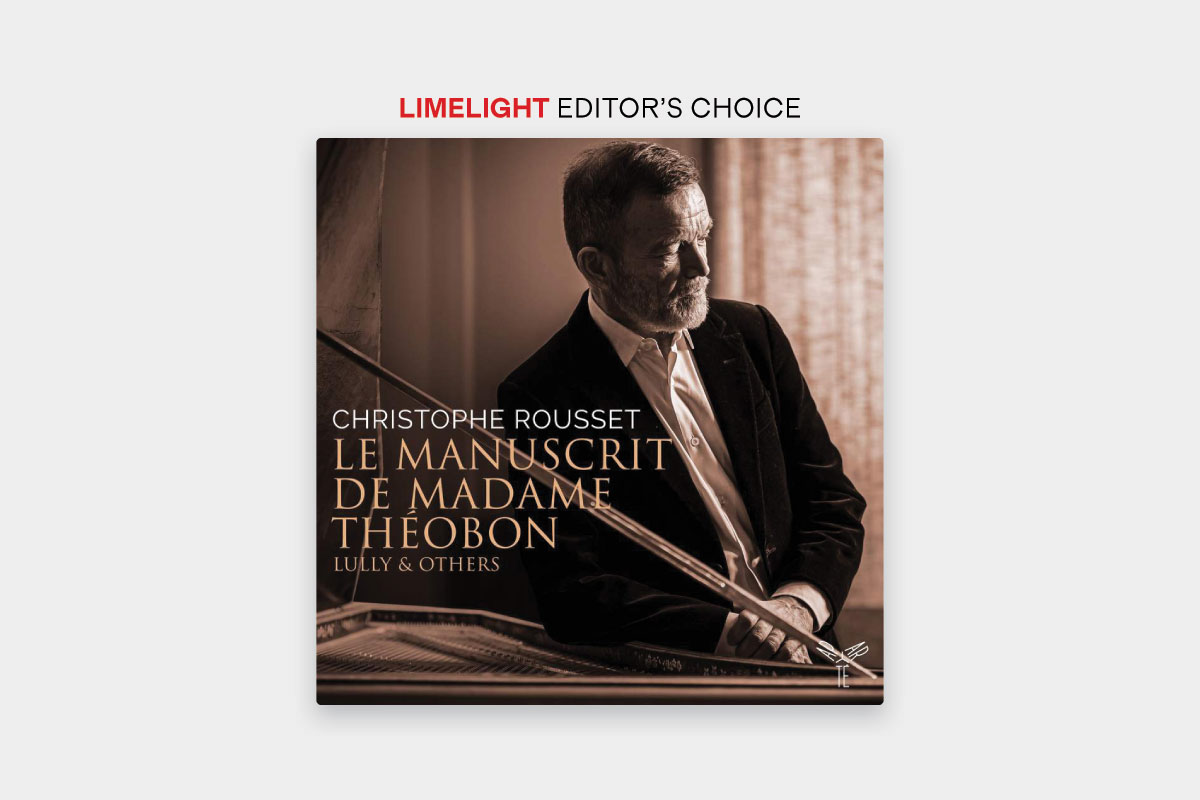 She was, as Rousset’s elegant booklet note explains, an attendant to Queen Maria Theresa, wife of France’s King Louis XIV. That is, for a while, until a romantic dalliance with his royal highness led to her expulsion from the court and a new life as a lady-in-waiting to the Princess Palatine, the Duchesse d’Orléans. Royal intrigue aside, Rousset found little about Madame Théobon’s musical credentials. But assumptions can be made, not least that her place in society meant she would have known the finest harpsichord teachers of the day. Jean-Henri d’Anglebert, for instance, who was a royal musician, and whose music is peppered throughout the two discs.

While the manuscript doesn’t appear ever to have graced a music stand – Rousset speculates that the collection may have been a learner’s manual – the music within forms an eminently listenable programme. Clocking in at over two hours, it offers a generous amount of music – almost too much to take in during one sitting, one might suggest. But Rousset has reordered the pieces into thoughtful groupings arranged by key, and there’s a wide variety of mood, texture and style to enjoy.

He plays the entire programme on a two-manual Nicholas Dumont harpsichord of 1704, restored by David Ley between 2006-16. Its sound is, says Rousset, both powerful and austere. Yet while that suggests something rather forbidding, the result is expressive, able to encompass both pieces originally written for harpsichord and those conceived for orchestra. It’s also beautifully recorded by Aparté’s engineers, who have captured the instrument’s clean, unfussy sound.

Lully’s music accounts for a good third of the pieces, landing right in Rousset’s territory. Over the years, he has recorded a number of Lully’s stageworks and that experience shines through in these performances, dispatched with theatrical flair, whether it’s the bustling La Descente de Mars from Thésée, the stately sarabande Dieu Des Enfers from the Ballet de la Naissance de Vénus or the jaunty La Mariée de Roland from Les Noces de Village.

In between, we hear Sarabandes, Gigues, Courantes, Chaconnes and so forth by d’Anglebert, his great teacher Chambonnieres and a smattering of other names, including Hardel and Gautier. But the aspect of Madame Théobon’s manuscript that first excited Rousset was the seven unmeasured preludes, new to his eyes and ears. In these preludes, the performer decides the lengths of the notes, and Rousset leans into their improvisatory flavour. This recording is a satisfying conclusion to his eBay mystery.

Rousset returns to Salieri's Italian operas with a colourful Armida.

A Rococo bon bouchée – forget the big wigs and mouches.

This disinterred tale of Bluebeard is an absolute killer.