Amy Campbell’s Leap wants to be more than just dance. The promise is that it’s “a unique blend of dance and story”, one that involves taking the audience into the lives of “compelling characters”.

It’s a big commitment and frustratingly unclear in its delivery. You can see Leap searching for something to hold it all together. You can see the dancers trying to create meaning as well as movement. However well-meaning, the effort feels superficial and distracting.

As the show begins a man, Callum Mooney, runs through the auditorium and, if not exactly leaping, dashes through a thicket of cords covered in shiny knots that catch the light. 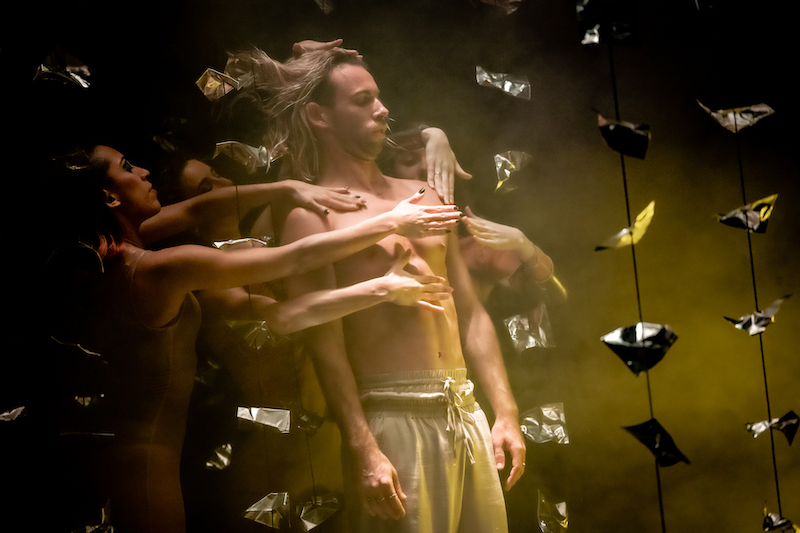 Other dancers come and go from the wings, stopping to perform acrobatic and robotic movements. Eventually – after too long really – enough of the cords are raised so it’s possible to see more clearly that Mooney is having some kind of internal struggle. He looks around, he twists and rolls on the floor, he makes over-wrought gestures.

Later he seems more laid back as he wanders from moment to moment, sometimes observing and sometimes participating. There isn’t much more to it than that. Yes, there are some intimations of friendship and some of aggression but not a lot to grab hold of. A slender thread indeed. It’s certainly not a story full of characters other than the personalities of the dancers themselves, some of whom make a far greater impression than others.

What is solid about Leap is the quality of the eclectic movement. Campbell’s ten dancers are very strong and apparently tireless. There is an over-reliance on backflips, multiple turns and other acrobatics but several sections show the performers as interesting and multi-talented.

It’s fun to see and hear two women and two men deliver a wordless song to a souped-up version of the Cygnets dance from Swan Lake, done with great good humour. The astonishingly long-limbed Neven Connolly grabs attention and juggles divinely. Juggling in a dance show? Well, it’s sort of dance-juggling and Connolly is excellent at it.

There’s also a happy scene around a piano with the gang joining in to play a few notes and a couple of big unison numbers to draw everyone together, even though one of them appears to mark the end of the show but doesn’t. Ashley Goh, a tiny but oh-so-tough specialist in street styles, is always a delight to watch. 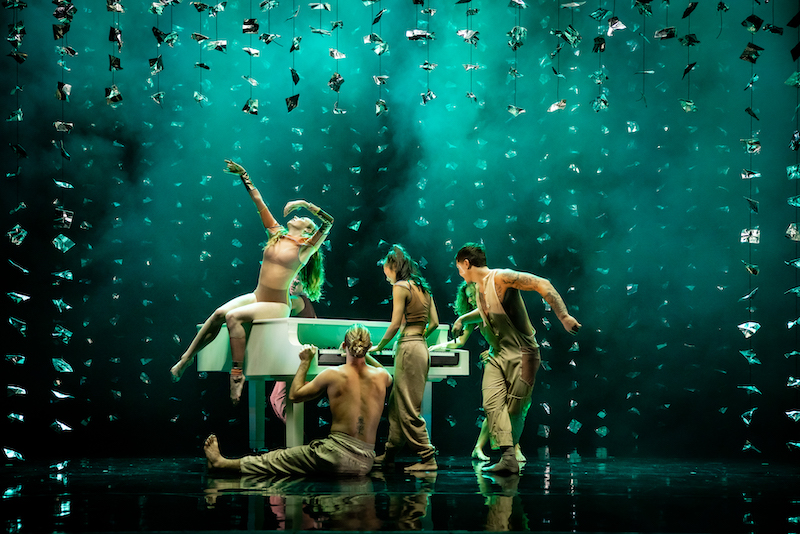 Four musicians are part of the live action, playing fast and loud – fast and loose? – versions of beloved classics. Bach, Beethoven, Tchaikovsky and the rest aren’t around to complain about what some might see as desecration. Connolly juggles to Für Elise, Mooney emotes to a Bach cello suite, it’s Pachelbel’s Canon in D at the piano and so on. Some of it works better than others but there’s no denying the verve of the players or the skill of music director and arranger Victoria Falconer.

While the dancers are too much obscured too often by the shiny multi-stranded curtain and Mason Browne’s costumes are surprisingly bland from those talented hands, the production itself looks attractive under Richard Neville’s lighting and when the full band is presented onstage rock-band style (Neville is also responsible for the set) the vitality is persuasive.

Nevertheless, at the moment Leap lacks a persuasive, coherent structure with clearly conveyed ideas. A lot of the choreography looks and feels repetitive which is another barrier to depth of meaning. And sometimes it’s dull and questionable, as in a trio of dances for women on pedestals that makes them look like objects for sale. If that’s the point, there needs to be a damn good reason for it.

Of course audiences may not care about such matters. The matinee audience at the show I attended took a little while to warm up – as does Leap – but by the end of the 65-minute piece they were cheering, with many standing. The unstoppable energy of the dancers and rousing roll-over-Beethoven music got the job done.

The production may not deliver on all fronts but you have to take your hat off to Amy Campbell for her ambitious concept, while Angelique Cassimatis gives a stunning performance.