Australian director Simon Stone has been making a name for himself in opera over recent years with a string of modern-dress productions that have often divided critics. His recent productions at last year’s Aix-en-Provence Festival are good examples. Where the world premiere of Kaija Saariaho’s Scandi-noir Innocence was a palpable hit with much to say about gun violence in schools, his Tristan und Isolde was a mess of conflicting ideas that only occasionally made any sense. Personally, I admired his visceral Wozzeck for the Vienna Staatsoper earlier this year, while his staging of Yerma with Billy Piper was one of the most devastating and affecting pieces of theatre I’ve seen. 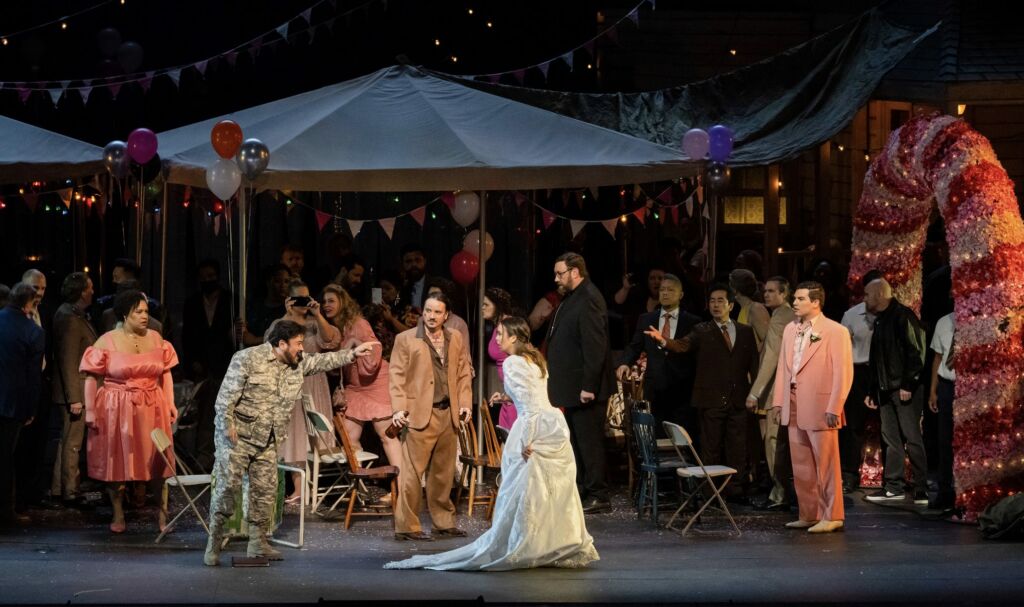 So, how does Lucia di Lammermoor – his debut production for the Metropolitan Opera – stack up? On the whole, US critics gave Stone’s updating of the action to a rundown town in the American Rust Belt a mauling, which having watched the advance screening for the Met’s HD series coming to Aussie cinemas on 6 August, seems unfair. While not everything works, and there are some dramatic tics that begin to grate as mannerisms once you’ve seen him use them three or four times, there’s no denying the intensity of the emotional storytelling. It’s also exceptionally well sung, with Nadine Sierra, in particular, creating a Lucia that demands to be heard.

Stone’s choice of the Rust Belt, he declares in an interview shown between acts, comes from a desire to mimic for a modern audience the kind of financial and social fall from grace that afflicted parts of the 18th-century Scottish aristocracy as reflected in Sir Walter Scott’s 19th-century novel. That’s a parallel that only works if Lucia’s family is seen as some kind of relic of a formerly wealthy past. Here, Stone makes Enrico a small-town mob boss, whose tiny empire seems to consist of a sleazy club where he deals the drugs. How they lost their reputable standing, and exactly how his business will be shored up if Lucia marries Arturo, remains unclear. The latter seems eminently respectable with well-heeled friends, but apart from a terrible taste in wedding attire, it’s hard to see what he is bringing to the party. 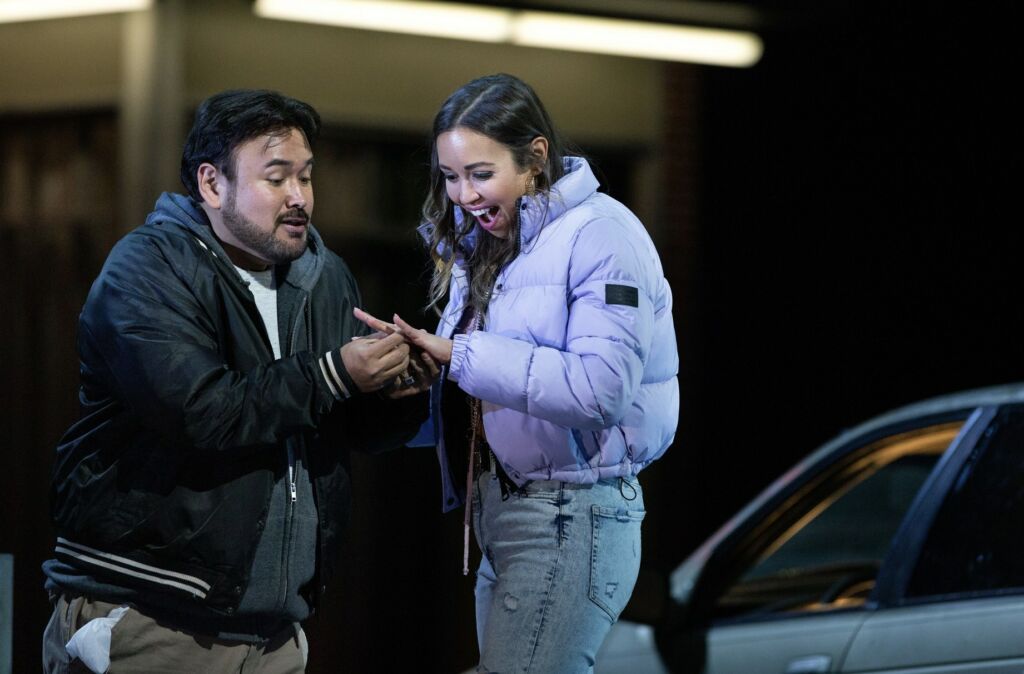 Nadine Sierra as Lucia and Javier Camarena as Edgardo

As for the hyper-schlocky mad scene, Sierra is utterly compelling, but the stage geography around the murdered Arturo makes no sense. There’s a remarkable amount of blood everywhere if all she has dispatched him with is a miniature fire extinguisher, and the half dozen grisly Arturos who proceed to stalk her round the stage are just plain silly.

One other niggle are the doctored surtitles to support the modern setting, i.e, “blocking” Lucia’s communications with Edgardo and “forwarding” incriminating pictures. At other times inconvenient words like “Scotland” are just dropped from the translation, though for anyone with a modicum of Italian they are there loud and clear in the actual sung text.

If you can ignore the endless urge to ask, ‘is this working?’, there are plenty of well thought-through dramatic moments and much that is engrossing to look at. Lizzie Clachan’s revolving set is a niftily designed affair that allows us to see a whole community pass before our eyes. There’s a club, a mart, a pawnshop, and a drive-in (that curiously seems to be playing a black and white classic). Then there’s the motel where Lucia and Edgardo go for some rather tame sex, and the reservoir where Lucia think she sees the ghost of a murdered girl (we see Lucia taking something at the counter in the drugstore, implying she may be a victim of the current American opioid crisis).

Nadine Sierra as Lucia and Artur Ruciński as Enrico

Equally impressive are Alice Babidge’s and Blanca Añón’s meticulously observed costumes and James Farncombe’s precise and detailed lighting, which never falters despite Stone’s ever-shifting stage. Although it gives us a sense of the town geography, the endless revolve has featured in rather too many Stone productions now and is now beginning to feel like one of the above-mentioned tropes. Here, it’s offset by the Met’s cameras that often negate the sense of movement, which perhaps makes the cinema experience less frenetic than it would have been in the opera house.

All that aside, there are some fine performances, especially the duo scenes – Lucia and the headstrong Edgardo (who we first see saving her from a mugging), Lucia and her toxic brother Enrico) etc. The wedding scene is a riot of selfies, pink icing and tacky excess, yet given Stone’s demand for realism everything goes oddly static for the famous sextet. The projected video of Lucia alone is effective, giving her plight greater prominence and allowing us glimpses into her private world and secret thoughts (though the cameramen wandering around filming her live are another directorial trope). 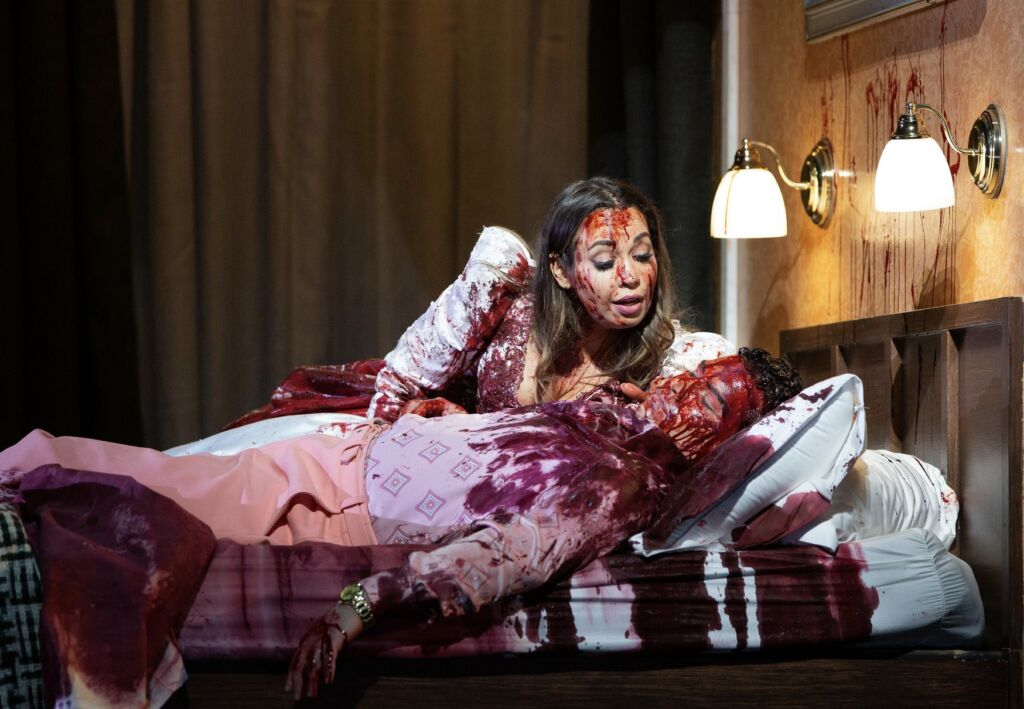 Nadine Sierra as Lucia and Eric Ferring as Arturo

As Lucia, Sierra is sweet and vulnerable, singing with greater involvement and sense of danger than on her recently released CD of bel canto heroines. Her soprano is rich and velvety, often thrilling, with assured coloratura and some secure and exciting high notes. Javier Camarena’s tenor may be a little short on colours, but he certainly has all the notes and is never less than fully committed.

Tattooed from torso to forehead, and clearly a drug addict, Artur Ruciński is a venomous Enrico (in an offstage interview he likens his character’s evil to that of Vladimir Putin!). His ringing baritone is very exciting indeed. Christian Van Horn sings a warm, stolid Raimondo, though what a priest is doing – apart from endlessly turning a blind eye – mixed up in Enrico’s seedy world of drugs and petty criminality is anybody’s business.

Nadine Sierra as Lucia and Artur Ruciński as Enrico

The Met Orchestra is on excellent form and the opera is paced extremely well by the experienced Riccardo Frizza who gives the singer’s plenty of room to breathe and takes a generally elastic view of tempi to tease out the emotional drama to maximum effect. As usual, the interval features are the Met’s usual combination of the egregiously self-congratulatory and the informative.

If the above judgement on Stone’s contribution sounds more equivocal than intended, that is perhaps because there are rather too many nits to pick here. They are, however, nits, and shouldn’t deter the adventurous from an original experience that finds a new way of telling a familiar tale and more than honours Donizetti’s timeless score.