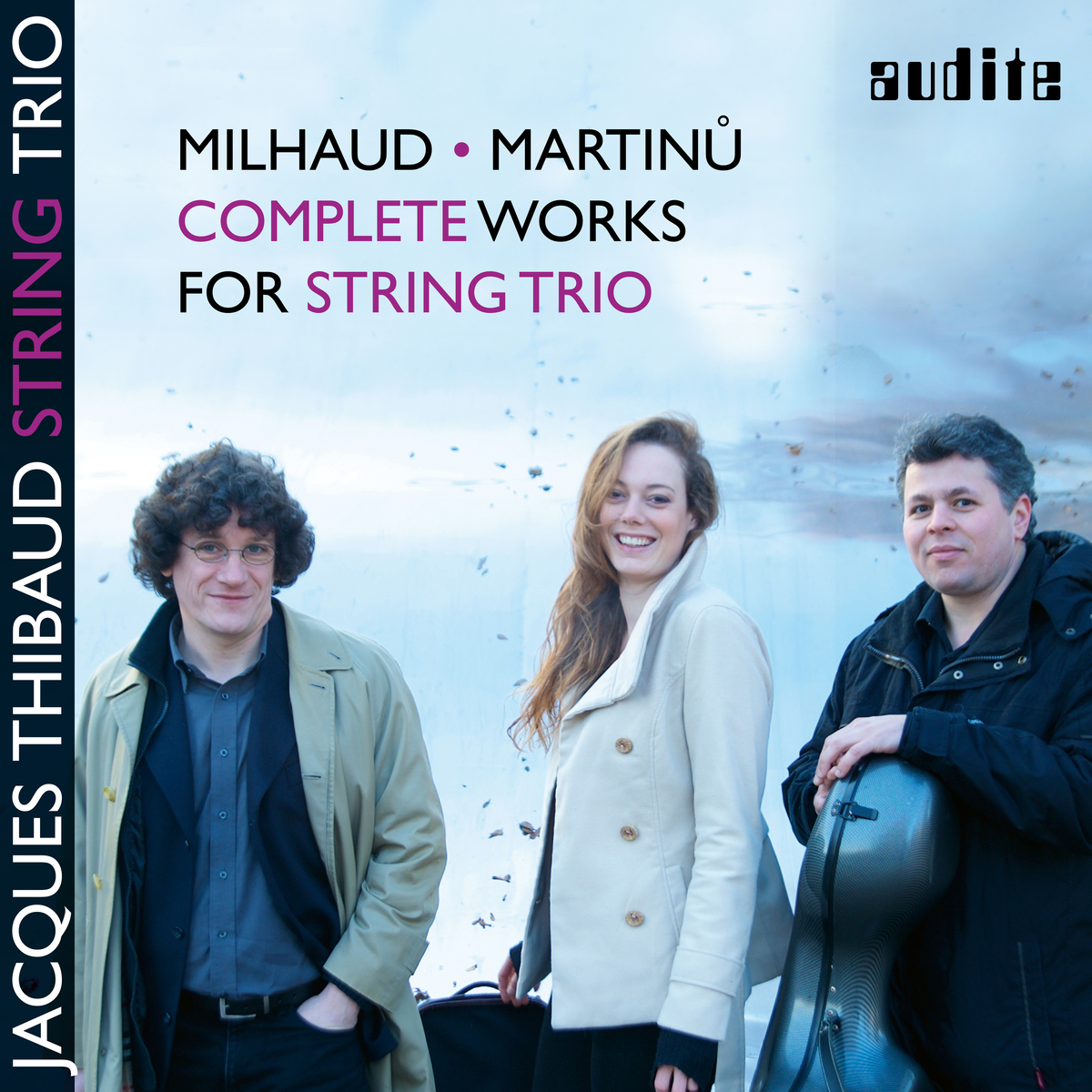 Darius Milhaud needed a ruthless editor. An affable teddy bear with a technical facility from the earliest age, he oozed music at the slightest prod – his opus numbers exceeded 400. He travelled widely through the Americas absorbing local colour but spread his invention too thinly, so despite some delightful masterpieces there is a great deal of less inspired if finely crafted dross; a daunting prospect for the curious collector who must dig through a great deal of quartz to find the occasional speck of gold.

His two string trios were written during his USA exile in the 1940s and yield little gold despite the booklet author’s persuasive analysis. Their wry nods toward popular idioms are hardly memorable, while the counterpoint may be rigorously worked but arid – more fun to play than hear. However, the Martinu trios are true gems.

Martinů may have been as prolific as Milhaud but his inspiration was on another level – prospecting uncovers the mother lode. Both studied and worked in 1920s Paris then were forced into exile during the war years – the contrast in personality may be pertinent; Martinů was quiet and reclusive; current thought is that he was on the autism spectrum.

His first trio had three performances in 1924 then disappeared to resurface in the Royal Danish Library in 2005. It is a startling, confident work; Martinů had just moved to Paris, begun studying with Roussel and was absorbing the modernist styles of the day, but you clearly hear the voice of the mature composer. The first movement opens abrasively before a surprisingly urbane tune takes over; this and the ‘sung’ melody of the Andante points forward to the open-hearted lyrical passages of later years.

The second trio was written in 1934 but had to await publication until 1951. By now Martinů had fully assimilated Czech folk idioms, spiky modernism and neo-classicist motor-rhythms into his own personal language. The first movement melds a bustling opening and close with a haunting slow interlude while the second veers from pensive opening recitative to dense argument with Bartókian effects propelled to a thrilling conclusion.

The Jacques Thibaud String Trio prefer unvarnished rustic truth to polished urbanity – their fearless approach suits the Martinů. They do not shy away from some uncomfortable sounds but throw themselves at the works with such conviction as to win me over. The Milhaud trios might have worked better with a more refined boulevardier elegance to paper over the cracks.

Argentine cellist Sol Gabetta catapulted into public consciousness when she won the Crédit Suisse Young Artist Award in 2004 and subsequently debuted with the Vienna Philharmonic and Valery Gergiev. She was 23 then, but had won her first competition at the age of ten, and now enjoys a hectic international career as one of the world’s most famous and highly-regarded cellists. Her wide-ranging repertoire includes three albums of works by Vivaldi and his contemporaries, recorded with Capella Gabetta, the ensemble she founded with her brother Andrés. In addition to core 19th-century repertoire, she is also committed to contemporary compositions, and has recorded an album of works by Latvian composer Pe¯teris Vasks which included his Second Cello Concerto, written especially for Gabetta.  This latest album features two 20th-century masterworks – the first, arguably the most famous cello concerto in the repertoire; the second, virtually unknown by comparison. Elgar’s concerto was written in 1919, with the dark pall of WWI hanging heavily upon its composer, who wrote, next to its entry in his catalogue of works, “Finis. R.I.P.”. Its 1919 premiere was a disaster, and it languished in popularity until recorded by Jacqueline du Pré in 1965 (incredibly, she was only 20) and her technically…

Bohuslav Martinů is surely one of the most underrated composers of the 20th century. His unique brand of neoclassicism is addictive: a vivid celebration of folk dance and classical tradition, spiced with pungent harmonies and rhythmic verve. It’s a wonder his music is not performed more. Kudos then to the Estonian National Symphony Orchestra, whose recent release of the composer’s two suites from his ballet Špalíček bursts onto the scene with breathtaking élan. A testament to Martinů’s innovative approach to genre, Špalíček was conceived as a hybrid work: a ballet with operatic elements. Translated as ‘Chapbook’, a collection of literary subjects in pamphlet form, Špalíček is a charming conglomeration of fairytales. Familiar characters like Puss in Boots cavort with lions, mice and sparrow hawks, while a princess is rescued (with the aid of a butterfly) by a cobbler from the grips of a terrible giant. There are magicians and mysterious shadows, enchanted castles and even a catchy waltz at Cinderella’s palace ball. And the music is just as imaginative as the stories. The vibrant orchestration shows an early 20th-century predilection for woodwind and brass, with plenty of percussion and piano punctuating the bubbly score. Martinů’s musical subjects are mostly of Bohemian…

Innovation, intimacy and insight: this is what opera should be about.

If CDs can be judged by their covers then this intriguing release from the Zurich-based Galatea Quartet could be Record of the Year. And with typical creativity they don’t pair the venerable Debussy Quartet with its usual Ravel bedfellow, but instead throw in Milhaud’s First Quartet. And what a pleasant surprise it is, a work of real lyrical beauty and elegiac sensibility, until the vibrant finale whose darting rhythms and jack-in-the-box mood-swings so suits the playing style of this seriously engaging and altogether contemporary-sounding ensemble.  The Debussy too is excellently played, sounding crisp and fresh with the kind of youthful vigour, at which the Ebène are the current masters, and which typifies the current crop of outstanding new-generation string quartets. But perhaps most interest lies in the closing, three-movement Sonatine for String Quartet by Pierre Menu, a prodigiously gifted young French composer who at just 23 died from the effects of poison gas during the First World War. While the quasi-impressionist work itself isn’t especially individual, this world premiere recording does suggest that his premature loss to French music justified the grief expressed by his contemporaries.  It’s a close-miked recording, making some instrumental timbres and studio noises a touch too…

The cello is well served by fine sonatas from a wide variety of composers great and small, and few are more enjoyable to listen to than the three Bohuslav Martinu wrote between 1939 and 1952. From the dramatic first (written in the throes of a doomed love affair and as his homeland Czechoslovakia was falling to the Nazis) to the celebratory and at times humorous later works composed in America, this is terrific music, which challenges the soloist. The charismatic and tireless Steven Isserlis seems never to be out of the recording studios these days and for this we can be thankful when we get albums of the quality of this new release with Finnish pianist Olli Mustonen. In his quirky trademark liner notes Isserlis describes how he and Mustonen met when Olli was 16 and they performed in a concert in Finland. We get to hear another side of this talented pianist, for he is no mean composer. Mustonen wrote his cello sonata in 2006 and this is a world premiere recording. It's accessible, tonal music with a feeling for landscape and legends such as you find in Sibelius. Isserlis recorded the Martinu for Hyperion back in 1989 (it was at…