A few years ago, there was great excitement when it was announced that the Kanneh-Mason family of musicians – seven brothers and sisters, all of whom play piano, violin or cello – would be touring Australia. The pandemic put paid to that.

Now, just over two years later, we begin to see members of this extraordinary family in person. On Saturday evening, the Melbourne Symphony Orchestra presented the best-known member of the family as the star turn of its Mid-Season Gala. Sheku Kanneh-Mason, barely 23 years old, is the third oldest member of the family and already an international celebrity. 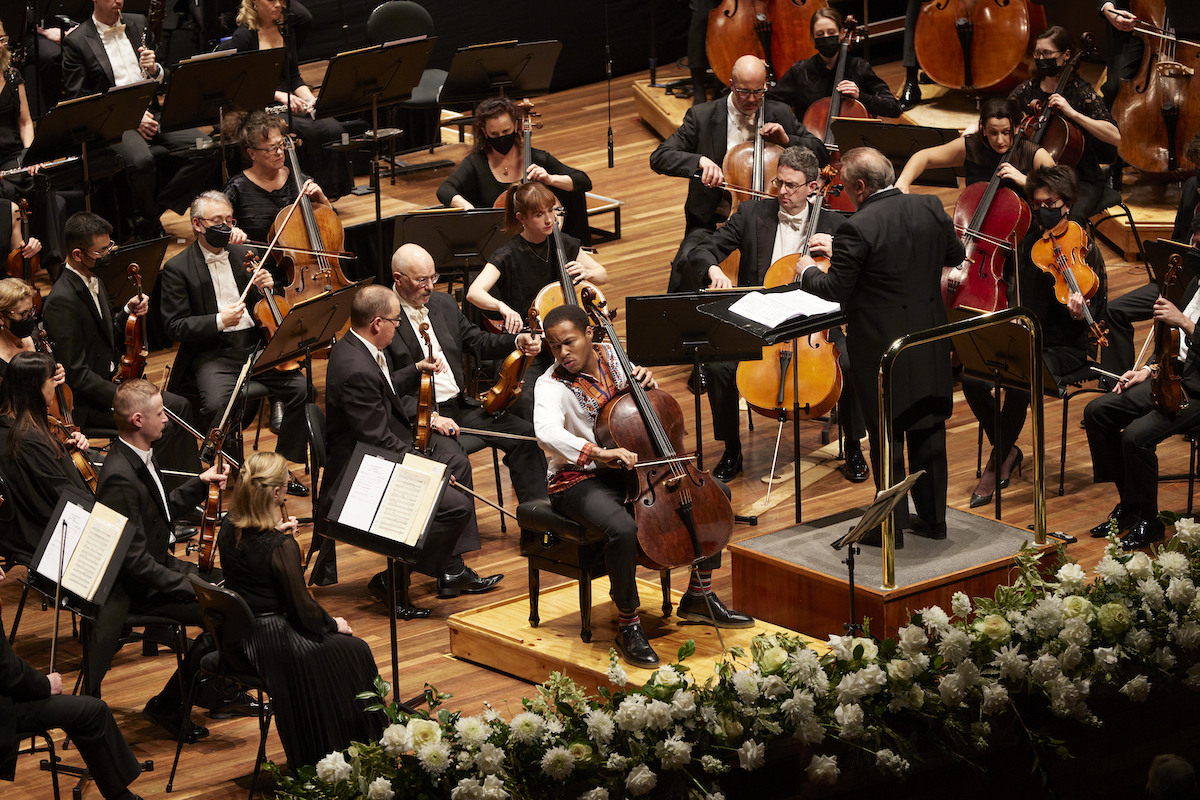 Millions saw the television coverage of the Royal Wedding from Windsor Castle on 19 May, 2018.  While Harry and Meghan signed the register, Kanneh-Mason, then just 19, played Schubert and Fauré and melted our hearts. (The hashtag #CelloBae went stratospheric!). Since then, he has appeared with major orchestras around the world and has released two chart-topping albums on Decca Classics. The second of these featured the Elgar Concerto from which many sensed that the legacy of Jacqueline du Pré had passed to another generation. In the 2020 New Year’s Honours List, he was awarded an MBE.

Kanneh-Mason’s appearance onstage was preceded by an attractive 10-minute work by Anne Boyd, called …at the rising of the sun… Commissioned by the Ku-ring-gai Philharmonic Orchestra for the 2001 Centenary of Federation celebrations, it is dedicated to her close friend and mentor, Australian composer Peter Sculthorpe. Fundamentally, this ‘meditation and prayer’ emerges as a revisitation of an earlier work for unaccompanied voices, As I crossed a bridge of dreams (1975), and captures that same gorgeous euphony of interwoven lines and the sense of suspension of time.

It opens, perhaps deceptively, with an effusive, sun-kissed fanfare whose 30 seconds could well be deployed as a theme for an ABC television or radio program. Thereafter, those strands of melody float through the orchestra like the wash of a Monet painting. It was the perfect concert-opener with which to settle audience and orchestra and could well be taken up by other orchestras to great effect.

It was good to see the Sydney-based composer escorted to the stage by the conductor Jaime Martín to introduce her piece. Speaking passionately and persuasively, Boyd dedicated this performance of her work, now over 20 years old, to the memory of her friend and colleague in both Sydney and Hong Kong, Alice Waten, the violinist, teacher and founding member of the Australian Chamber Orchestra who died on 18 July.

For Sheku Kanneh-Mason’s Australian debut performance, I confess I thought the choice of Shostakovich’s Second Concerto Op. 126 (1966) somewhat odd. Light years away from Elgar, it is also a far cry from Shostakovich’s First Concerto Op. 107 (1959), with barely a D-S-C-H signature motif to be heard. But, after 35 minutes, I was grateful that he had played one of his favourite pieces for his Australian debut, resplendent in colourful shirt and multi-hued striped socks.

This concerto doesn’t have the grand tunes of Dvořák or the Romantics, nor the delicate lyricism of Boccherini or the Classicists. It sounds fragmented, percussive and brittle, perhaps reflecting the composer’s ongoing battle with Russian authorities. These were resolved somewhat by his late decision to become a member of the Communist Party, a decision that was ratified in 1966, the year of this Second Cello Concerto. Around this time, he was also beset by poor health and the deaths of several major colleagues. The British musicologist and Shostakovich expert David Fanning has written about the works of this ‘late period’ – of which the Second Concerto is the first – as being “surrounded by paroxysms of pain, inscrutable soliloquies and ghostly revisitations of the past”.

Kanneh-Mason conveyed each of these dimensions vividly: those desiccated hints at melody, the aggressive strumming across all four strings, the wailing in the upper register, the black humour of the cabaret song Bubliki, kupite bubliki! (‘Bagels, buy my bagels!’) from Odessa, where Shostakovich composed the work. At times, I imagined that burly Russian Mstislav Rostropovich, for whom Shostakovich wrote both concertos, crouching over the instrument extracting ever more grit and grunt from it. (Kanneh-Mason plays a Matteo Goffriller cello from 1700 which is on indefinite loan to him). At other times, he peered aloft into the heavens, his face reminiscent of that familiar, blissful expression of Yo-Yo Ma. While some in the audience seemed mystified by the concerto, more were delighted. 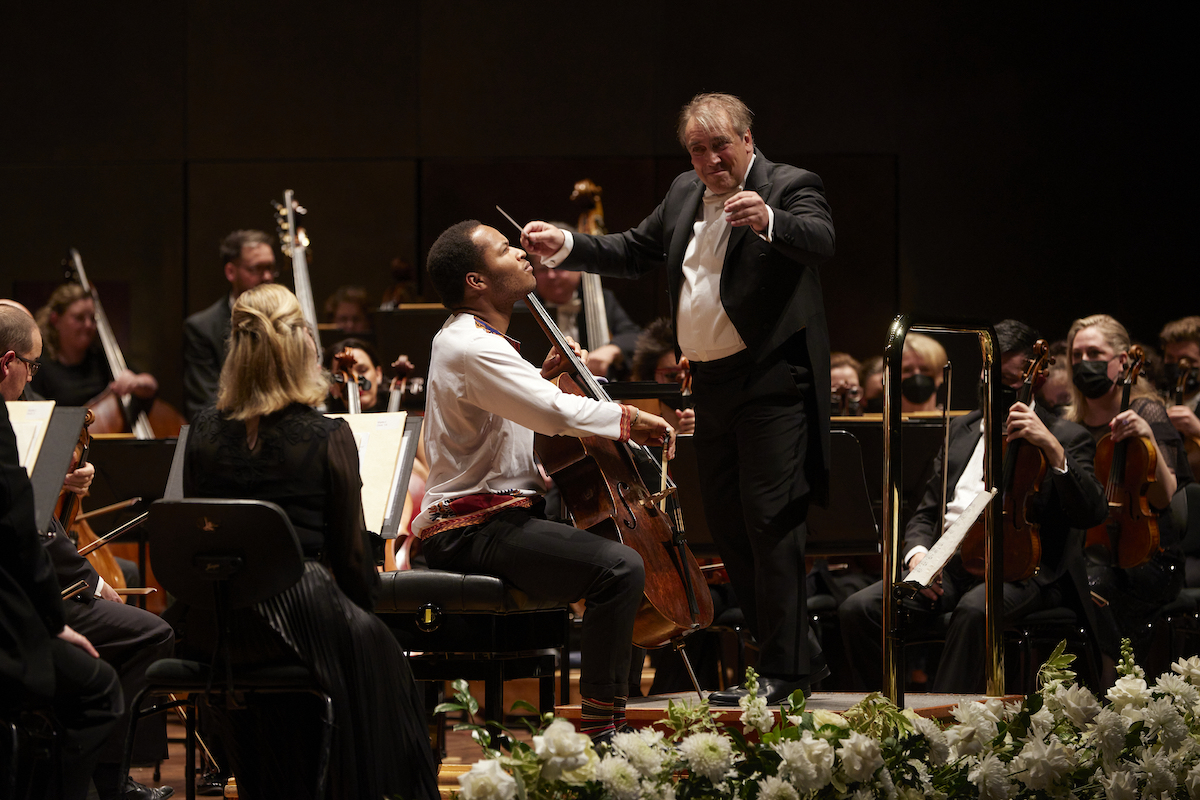 Clearly, Kanneh-Mason himself was having a good time, as were Martín (the MSO’s Chief Conductor) and the entire orchestra. Kanneh-Mason rewarded the ovation by leaping from his stool and shoo-ing the front desk of the violas off the stage, taking his position with four members of the MSO cello section. They played a single encore, Kanneh-Mason’s own arrangement of Bach’s aria Komm, süsser Tod, komm sel’ge Ruh’  (“Come, sweet death, come, blessed rest”), BWV 478.

After the uncompromising intensity of the Shostakovich concerto and the inner serenity of Boyd’s work, the performance after intermission of Dvořák’s New World Symphony seemed somewhat disappointing. Only gradually did the MSO appear to muster the energy to give a cogent performance of this well-known warhorse. Were they fatigued? Did old Dmitri wear them out? From the outset, there were a few articulation problems and moments of dodgy intonation, but these minor blemishes disappeared over time.

It was good to see the conductor dispense with the score on this occasion. (Virtually any maestro worth his/her salt should be able to conduct this score from memory.) Without leafing over printed pages, he was able to pay more attention to dynamics and contours. The voicing of wind and brass chords was particularly striking; for the first time, I imagined I could hear the 51-year-old composer at the organ of St Wenceslaus Catholic Church in Spillville, Iowa, where he spent a summer holiday whilst writing the symphony. Its full title in Czech translates as “Symphony No 9 in E Minor, From the New World”. (I too have played that very organ and made a Dvořák-tour around New York, so I have a special love for and affinity with this music.)

This is a symphony that many in the audience, if not most of them, know and love. The smiles of recognition at the appearance of the Goin’ Home melody in the famous Largo movement, played by Principal Cor Anglais Michael Pisani, were genuine and affecting. It was one of the few highlights in what seemed a somewhat robotic and routine performance. It came at the end of a long and, overall, very rewarding and engaging evening of music-making.

The Kanneh-Mason family are a must-see – and you could well be part of musical history-in-the-making by being there.