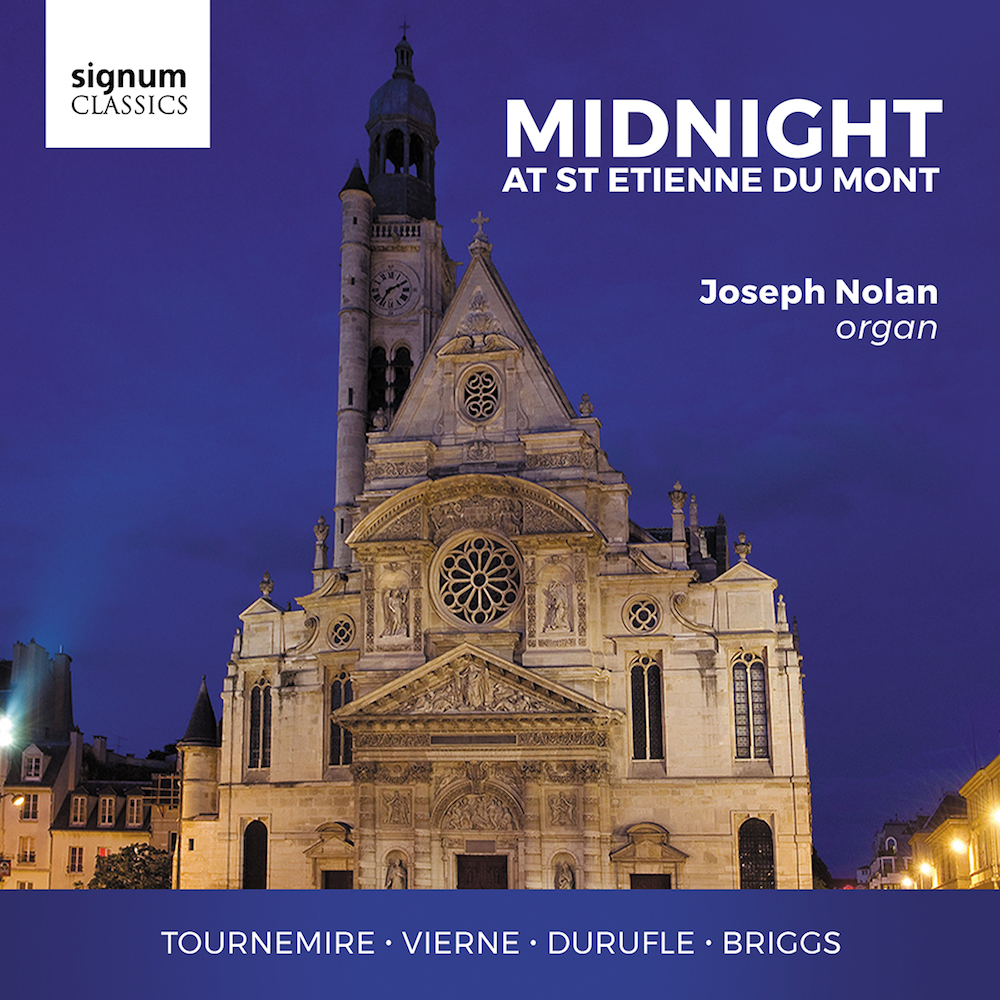 Classic horror movies never seem complete without some poor wretch hunched over an organ console at midnight. Joseph Nolan, organist and master of the music at St George’s Cathedral, Perth, has not taken his inspiration for this disc from Bela Lugosi or Victor Hugo, but from Woody Allen’s whimsical 2011 film, Midnight in Paris. Wandering the Latin Quarter late at night, the main male protagonist travels back in time outside the church of Saint-Etienne-du-Mont. This church is rich in artistic associations. It is revered by organists because the organist-composer Maurice Duruflé played there for most of his career. The celebrated director, Max Ophüls used the church’s interiors and exteriors in his classic 1953 film, The Earrings of Madame de… and St-Etienne is even mentioned in a Hemingway novel.

Nolan’s program not only evokes the midnight hour, but pays homage to Duruflé. After shattering the stillness with Charles Tournemire’s grand improvisation on the Te Deum (transcribed by Duruflé), we then hear one of Louis Vierne’s strangest works, Fantômes (Phantoms) from his Op. 24 Pièces de Fantaisie. The piece is a spooky conversation between various characters who each have their own theme, including a beggar who cranks a barrel organ that plays O sole mio – quirky, but entirely apt in this context. The Scherzo from Vierne’s Organ Symphony No 6 continues the elfin mood.

Pealing with joy, the Finale from Vierne’s Symphony No 5 reveals Nolan in ebullient form, before moving to Duruflé’s tripartite Suite, Op. 5. It is particularly pleasing to hear this work on the composer’s own instrument with its unique sonorities. While Olivier Latry’s 1985 recording of all the Duruflé organ works at St-Etienne remains a favourite, Nolan’s polished and idiomatic account is a joy; the concluding Toccata bursting with bravura.

Nolan concludes the recital with the first recording of David Briggs’s 2009 work Le Tombeau de Duruflé. Cast in 11 movements, each based on a different plainsong melody, the work tips its hat to Marcel Dupré’s 1942 collection, Le Tombeau de Titelouze. Nolan’s account is faithful to the composer’s intentions, but Briggs could have taken a leaf out of Duruflé’s book and aimed for a lighter and less academic treatment of the chant.

Organists cannot entirely shake off the perception that they are weird musical
wizards whose best work is done after dark. This accomplished and entertaining recital keeps us thinking this may just be so.

Joseph Nolan’s Midnight at St Etienne du Mont is Limelight‘s Recording of the Month for March. Read our interview with Joseph Nolan here.

The last pre-fire recording of the Notre Dame organ brings Bach into the 21st century.

A rare work of genius gets the performance it deserves.