Weinberg wrote 17 string quartets, and as general interest in his music gathers pace, so too do the number of ensembles giving this cycle serious attention. This is the second volume in the Arcadia Quartet’s tour of the Polish-Jewish composer’s quartets and matches the excellence of the first. As the Romanian group explains in the booklet notes, coming across Weinberg’s music felt like a true moment of artistic discovery for them. “His music is like a glow of light surrounded by the darkness of the unknown, and it quickly became a goal of ours to attempt to dilute these shadows,” they write. 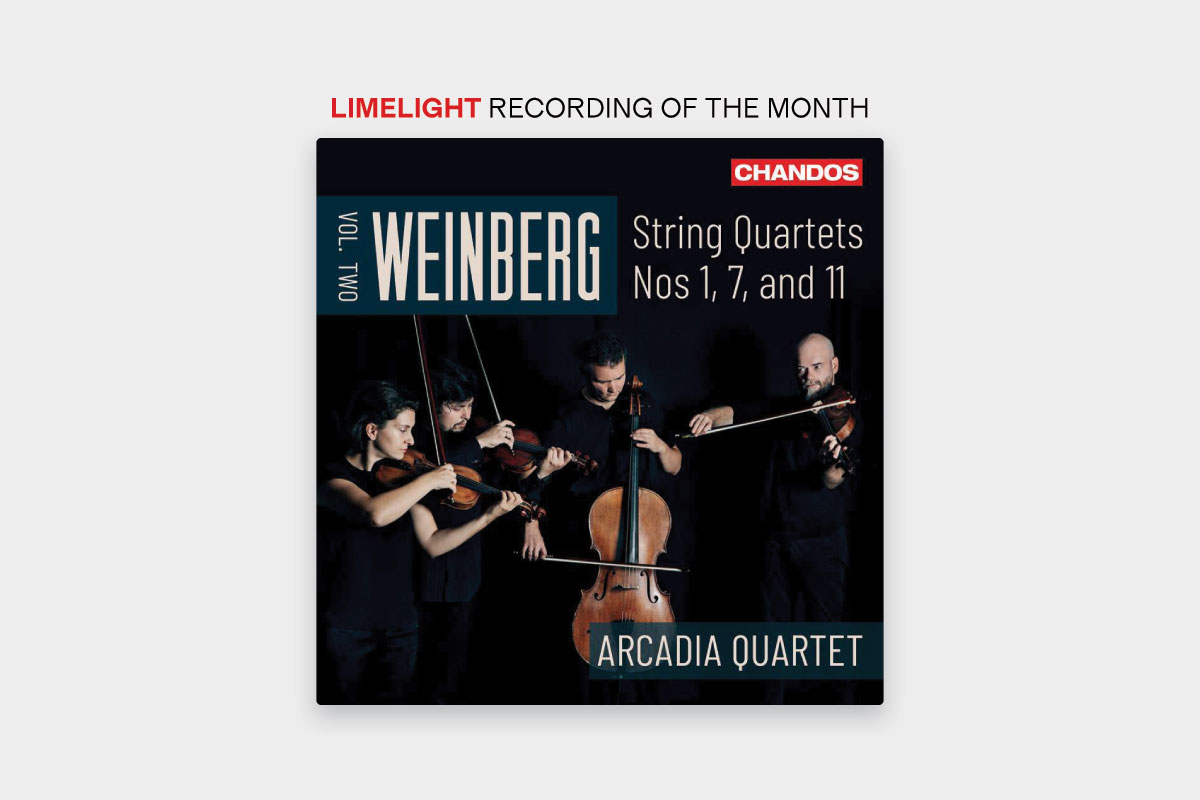 Recorded with exemplary warmth and clarity by Chandos Records, the program brings together three quartets from different points in the composer’s life. The earliest takes us back to the start: String Quartet No 1 dates from 1937, when Weinberg was still in Poland, not long before he was forced to flee the Nazis. He was only a teenager at that point and a self-taught composer; yet there was clearly enough of substance that he returned to the piece five decades later to create the version played here. If Weinberg believed in this youthful quartet, so too does the Arcadia Quartet, giving a performance that’s brimming with energy. A fraught Allegro comodo is followed by an enigmatic Andante tranquillo, painted in muted colours, and rounded off by a restless Allegro molto finale.

By the time he wrote his Seventh Quartet in 1957, Weinberg was living in the Soviet Union, where he had faced persecution by Stalin’s regime. He had also met Shostakovich in the 1940s; the pair had become friends and artistic colleagues, and their quartets certainly share emotional themes and stylistic traits. String Quartet No 7 ventures into philosophical territory, opening with a questing slow movement that the Arcadias pace superbly. Not only that, but there’s also always a sense that the music is entirely grounded, each gesture unfolding as naturally as breathing. A bittersweet dance follows, played here with spiky delicacy and silvery grace. It’s a welcome interlude before the bold concluding Adagio, an intense set of variations that venture into profound territory. The Arcadia Quartet totally commits to the music.

If Quartet No 7 provides the emotional heft of the program, the final piece, Quartet No 11, is more enigmatic and muted. Jittery, repeated motifs fly around in the Allegro assai, dispatched with nimble fingers and bows by the Arcadias. But then in the Adagio semplice, extended instrumental solos convey a numbness that speaks of deep trauma – no wonder given the horrors Weinberg had faced in his life. A final Allegro leggiero provides scant comfort and few answers. Even in the 1960s, which the composer called “the starry years” of his life, thanks to the support of high-profile artists, including the Borodin Quartet, music was a place to explore and express difficult emotions and experiences. If his music has languished in the shadows for too long, the Arcadia Quartet should be applauded for bringing it into the light.