Mitch Harvey is the inaugural recipient of Co3’s Pathways Program (supported by The Wright Burt Foundation) which facilitates artists to find the Yellow Brick Road to personal creative endeavours. As a founding artist of Co3 in 2015, Harvey’s travels have led him to the creation of his own company and its first production, MindCon, a 50-minute solo work, in which he performs.

MindCon is set in a dystopian world and the audience is part of it, standing around amongst the noise, haze and revolving lighting, to watch what happens as power fluctuates and insecurity peppers the space around them. 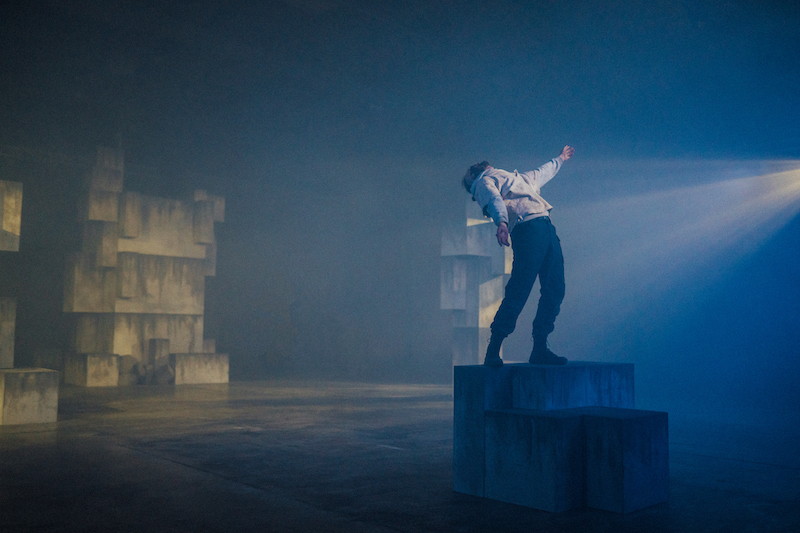 The setting in the disused, vast European Foods Warehouse is a superb frame for this dystopian world. With a silver foil-clad ceiling some ten metres above, a foggy, gloomy atmosphere, stone totemic structures, a sprawling grey concrete floor and roaming spotlights, you feel as though imprisoned in a gulag where you’re one of the many defeated conformists and Harvey is the maverick, suffering alone in this post-apocalyptic landscape aptly created by designer Jackson Harvey.

Nemo Gandossini-Poirier’s lighting design highlights Harvey, the audience and the space around him like an old master’s paintbrush. It alternately floods the arena, angles in from the sides, blinds and then total blackens. It’s beautiful to watch and acts rather like a partner to the dramatic tension of Harvey’s sharply savage embodiment of a dystopian inmate.

Harvey is a statuesque performer, using the proportions of his lengthy, long-limbed, toned body to display anger, supplication and rebellion in a search for some some meaning and some hope.

He’s a supple dancer who can express violence and internal agony. He exudes authority over his performance so that watching him you can free yourself of any residue of anxiety and just wallow in the movement and the momentum, and your own imagination. Dystopian stories often tell of survival, bravery and defiance in the face of a totalitarian government and Harvey conveys a journey encompassing all of this until his resistance inevitably wanes.

Louis Frere-Harvey (the lead collaborator and composer) went with Harvey to a residency at Lake Studios in Berlin where the origins of MindCon began. He’s a percussionist and appears in the latter part of the performance himself, high up in the ramparts of the ruins, pounding drums, his arms, gestures and demeanour akin to a Japanese artist soothing ink onto parchment. Not that his composition was anywhere near soothing. It assaulted the ears, whisked across space like a doodlebug, enhanced intensity with fissures of tone and quality, its rhythmic beat and tempo creating  a seemingly bottomless well of inventiveness. As with the lighting, it was in no way subservient to the dancer.

Utopia is described as a perfect society free of pain, war and disease; a situation this world falls far short of. How apt if MindCon could have been performed at COP26 in Glasgow as a physical and pertinent reminder of the dystopia that might lie ahead.