Nature abhors a vacuum, and so, I’m sure, would William Shakespeare. That the writer of plays which roused the London rabbles and sparked a moral panic so great that all the theatres of London were shut down – admittedly the Black Plague didn’t help – is so often ushered behind a velvet rope, hermetically sealed, pinned to a display board and forbidden to change, is a source of great frustration and confusion to those who love his irreverence, bawdiness and wit.

So it was a joy to watch as new life was breathed into Much Ado About Nothing in an inner west Sydney warehouse last night by a company of early-career creatives not afraid to embrace the pop side of The Bard, and to lean into the thousand romantic comedy tropes he launched. Thanks to some judicious cuts and departures from the original script, an in-the-round staging that brought the audience into the thick of the action, and a cast of actors with the maturity and skill to incorporate iambic pentameter into 21st-century idioms and speech patterns, this production was a reminder of how much fun Shakespeare can be. 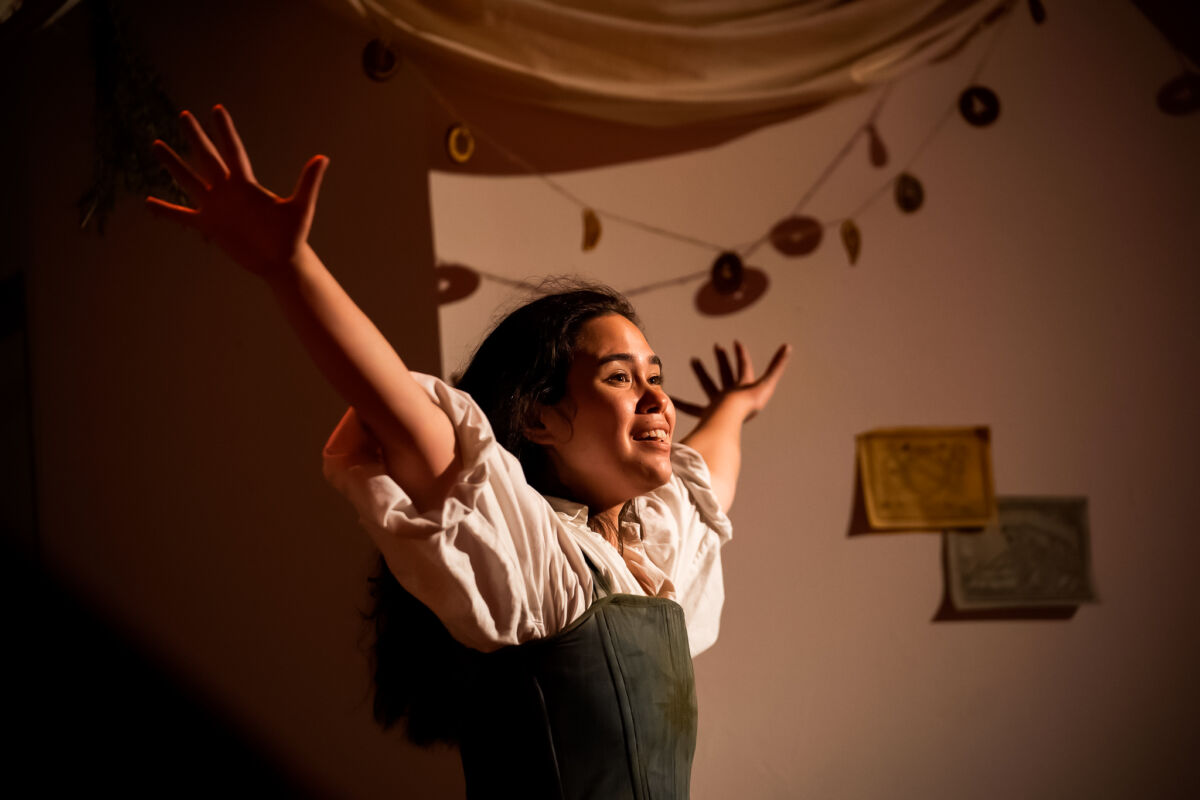 Dominique Purdue as Beatrice in Much Ado About Nothing. Photo © Troy Kent.

Behind a garage roller door in perhaps the last pocket of Camperdown not to have been gentrified to within an inch of its life, a warehouse has been transformed into a Mediterranean tavern by set and costume designer Blake Hedley, with a gantry running down one side of the room, a small bar nestled opposite, thick ropes and billowing sails arranged evocatively about the place, and small tables safely distanced from each other in the middle of the room.

As soon as you enter you are plunged into the carefree world of sunny Messina, the local characters striking up conversations as you find your seat and breaking into rousing renditions of What Shall We Do With The Drunken Sailor? A quick glance at the program suggests this production doesn’t take its author too seriously, with a strapping young Joseph Fiennes staring back out at you above the caption ‘Playwright’. Fiennes of course portrayed the Swan of Avon in Shakespeare in Love, the 1998 film penned by Tom Stoppard that won the Oscar for Best Picture, and this production certainly takes some cues from that movie in its youthful energy, irreverence and naturalism.

Director Bokkie Robertson (no relation to this reviewer) undoubtedly took inspiration from Shakespare in Love in choosing to open this show with a shipwreck, an addition to Much Ado but, as Stoppard’s Shakespeare said, always an excellent way to start a play. Don Pedro (Nick Wright) and his soldiers including Benedick and Claudio have returned triumphant from battle, ready for some more sportive tricks at the estate of ​​Leonato (Dany Akbar, filling in at short notice for Jeremy Godwin). Leonato’s daughter, Hero (Izabella Louk), has history with Claudio, and Leonato’s niece, Beatrice (Dominique Purdue), has what you could call a love-hate relationship with Benedick but for the fact that both parties are very clear it is hate-hate.

Much Ado is rather thin on physical action. Instead it is densely packed with some of Shakespeare’s quickest and wittiest repartee. Much rests on the two pairings at its centre, the difference between a good production and a poor one reliant on the audience believing that Claudio and Hero are young, headstrong and utterly beside themselves in love, and that Beatrice and Benedick have been squabbling for years, but their bickering is fired by a deep attraction that neither wants to admit to – and that their eagerness to believe the other loves them comes from a firm, arrogant belief in their own irresistibility. 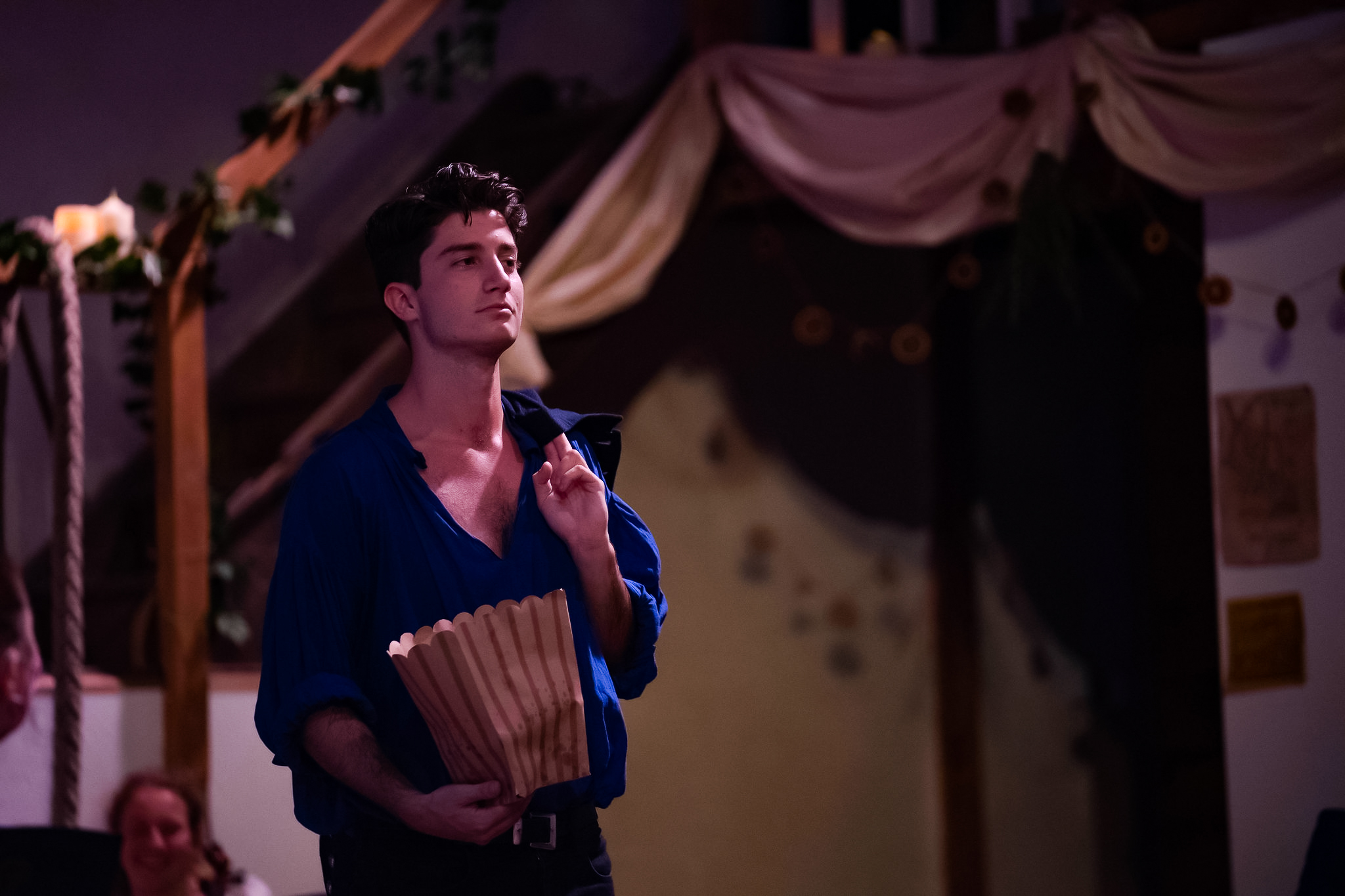 Levi Kenway as Benedick in Much Ado About Nothing. Photo © Troy Kent.

The four actors at the heart of this production are utterly believable in portraying these various personalities, drawing the audience completely into two of the great ‘will they or won’t they?’ plots. Levi Kenway is an absolute delight, walking the very fine line between earnestness and arrogance that makes Benedick so tedious in the first act and so loveable in the second following his flip from avowed bachelor to love-drunk romantic. Kenway delivered his Benedick with bright-eyed, full-hearted confidence and swagger, and a self-assuredness that would be exhausting if he wasn’t quite so charming about it. He was well matched by Dominique Purdue as Beatrice, wearing the character’s exasperation and frustrations on her sleeve and with just the right amount of sharpness to avoid spilling over into acerbic. Purdue was warm and engaging and played the audience well, and her frustration at one patron’s suggestion for the next line of her lovesick poetry had everyone laughing along. Some awkward hand gestures and occasional foot shuffling detracted slightly from her performance, but one suspects that could be opening night nerves.

Russell Cronin as Claudio is delightful in his dumbstruck, puppyish love for Hero in the early scenes, and totally convincing in his rage and grief at the climax. It can be hard to find a balance in Claudio’s wild mood swings throughout the play, but Cronin brought us along with him. Izabella Louk as Hero captured her innocent, naive joy at the outset and her later crushing betrayal. Credit goes to Louk and to director Robertson for their choices for the character following her disavowal, with this Hero allowed moments of rage and hatred towards her lover and her husband that more fully flesh out the character and make her seem more like a person than a plot device. This managed to overcome the always-problematic climax of the play, stressing the depths of Hero’s betrayal as justification for her faking her death as revenge.

The supporting cast is every bit as strong as the four leads: Alex Kendall Robson did double duty as the scheming fool Borrachio and a far more earnest priest, distinguishing each character with very different line readings and physical energy. Camila Ponte Alvarez was charming and delightful as Margaret, full of energy and a cheeky twinkle in the early scenes before her exploitation in the villain’s plot brought moments of heartbreaking agony. 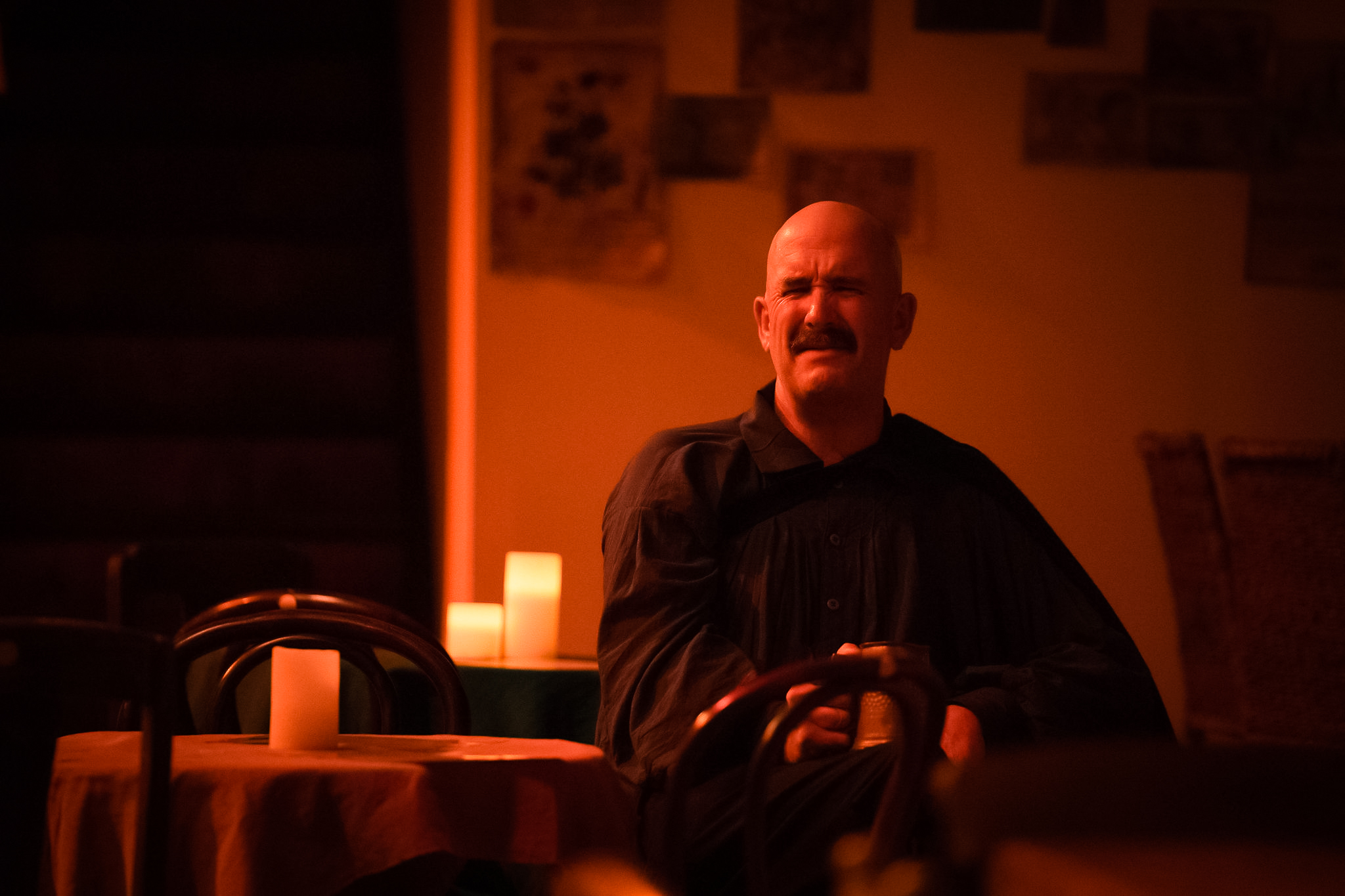 Brendan Toole as John, the Bastard Prince in Much Ado About Nothing. Photo © Troy Kent.

Brendan Toole as the malcontent, malicious John, the Bastard Prince, was a scheming almost-pantomime villain, and one could have easily imagined him twirling his moustache in glee if only it extended slightly further out from his face. But Toole coloured that depiction with moments of genuinely touching emotion – when telling Claudio and Don Pedro of Hero’s faithlessness you almost believed that he was sad to be revealing the news; later, when Hero is thought dead, we saw John steal away from the scene of his crimes, and walking past Hero’s body there was a moment of regret, Toole movingly playing the wordless scene.

Special mention must be made of Nick Wright as Don Pedro, whose easy charm and winning confidence sets much of the tone in the first act. Wright was assured in his performance, and delivered his lines with confidence and mastery of the language. Indeed that comment could be made about most of the cast, who belied their youth and inexperience by demonstrating total confidence in Shakespeare’s language, especially commendable in a play that relies on wordplay and rapid-fire badinage to drive it. Many more experienced actors struggle with the balance between respecting Shakespeare’s iambic rhythms and finding their own meaning in the works, but this cast managed it with great aplomb, a credit to the actors, the director, and Dramaturg Emily Dzioba.

In the program notes, producer Louk writes that this production was borne out of the frustration and devastation of COVID, and the number of talented early-career theatre practitioners who had emerged from their training to find next to no opportunities to play their wares. It speaks volumes of the entire cast and creative team that this production was so joyous, charming and polished, despite the slings and arrows that they have all had to endure over these past two years.

There were a few imperfections here and there, and some moments where the in-the-round staging made it hard to hear or see precisely what was going on. At times the energy teetered on too much of a good thing – Shakespeare’s comedies have the mania and intensity built-in, so sometimes less can indeed be more – but the cast maintained such infectious energy and winning charm that one could forgive such minor quibbles. If this is the next generation of theatre makers in Sydney, the artform is in excellent hands.

Much Ado About Nothing plays at Flow Studios, Camperdown, until 7 May, 2022.