In 1915, amidst the gloom and despair of war, Claude Debussy launched plans to create a series of six sonatas. Three of these were realised: the Violin Sonata and the Cello Sonata, and another for the quite original combination of Sonata for Flute, Viola and Harp.

Debussy – ‘Claude de France’, he declared himself, patriotically – also outlined plans for  three other sonatas: one for the curious Baroque-like combination of oboe, horn and harpsichord, another for a more dance-hall combination of trumpet, clarinet, bassoon and piano (think Darius Milhaud). The last would be a kind of ‘concerto’ for 12 instruments, not quite a decade before Alban Berg’s Chamber Concerto. 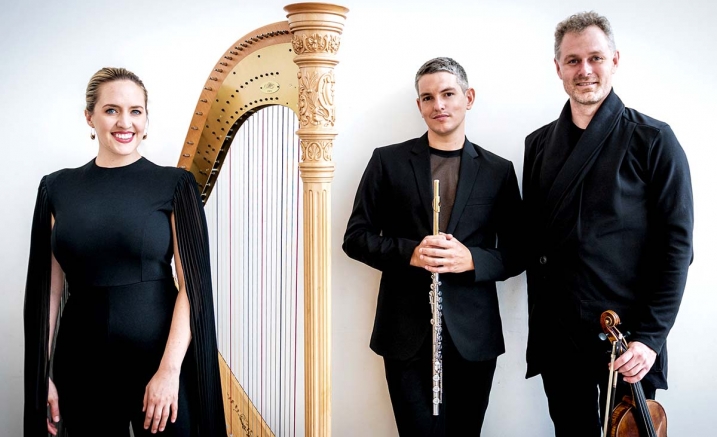 It is the third sonata for Flute, Viola and Harp that has resonated most remarkably over the past century. Spawned by the unique combination of Debussy’s sonata, various trio ensembles have cropped up over the world. In Sydney, three musicians – Emily Granger (harp), Jonathan Henderson (flute) and James Wannan (viola) – have teamed up to devise an entire program of seven short-ish pieces by Australian composers.

“It’s a lovely combination indeed,” Ross Edwards said recently. “I hope I have done it justice.” Based on the new commission premiered in the Melbourne Recital Centre, Three Mystic Dances, Edwards has delivered bounteously. For two of his three Dances, Edwards revisits earlier music.  The third Dance seemed “to unfold with minimal intervention from my conscious mind,” he confesses, “allowing me to step back and watch it happen”. He recommends that listeners approach it with “a similarly detached approach”.

In the third Dance, the harp becomes co-equal partner with the two melody instruments for the first time. Edwards does not succumb to the pitfalls of many contemporary compositions, where the harp provides harmonic accompaniment, leaving melodies to others. The harp has been central to his music for decades, and he treats it here with affection and appreciation of its capacity. Here, the introspective composer emerges, with occasional flashes of his rhythmic flair. Over ten minutes, Edwards’ Dances embody that famous dictum embraced by John Cage: “the function of music,” Cage said frequently, “is to quiet and pacify the mind, thus rendering it susceptible to divine influences.”

Edwards admits inspiration derived from hearing a performance of Satie’s Trois Gnossiennes performed by Stephanie McCallum at the Adelaide Festival in 2021. That spacious airiness, crystalline open lines, suspension of time and rhythm, Edwards’s music often revisits these characteristics of Satie.

Appropriate then, that his Dances should be preceded by Satie’s first Gnossienne, where the flute and viola alternated the main melodic line. This itself was preceded by a short Reverie from Christopher Gordon, an unremarkable Debussy-offshoot.

More remarkable was a new piece by Anne Boyd for solo viola d’amore, the Baroque multi-string antecedent of the modern instrument which James Wannan characterised as “the viola’s pretty sister”. Boyd took the instrument’s name literally – her seven-minute work is entitled, simply, ‘Of Love’ – and focussed on the theme of ‘love’ which appears frequently in her music. Again she returns to a beloved Korean folk-tune which appears in the chamber piece My Name is Tian (1978) and even earlier in her String Quartet No 1, Tu Dai Oan, the fourth generation (1968). Boyd transforms the simple tune into a tour de force of conventional and contemporary techniques, with simultaneous bowing and plucking, and energetic arpeggios. (I was reminded of the old musician’s adage about the viola being “principally good for scrubbing”, and reflected on the relentless ‘scrubbing’ in Berio’s Sequenza VI (1967) for William Primrose, onetime resident of Wollongong!) James Wannan delivered a dazzling performance. It augurs well for the new commission which Anne Boyd will be writing for this ensemble.

Gerard Brophy’s solo flute piece, Es (1994) seemed not to have had a public performance before Jonathan Henderson’s enthusiastic endorsement of its dynamic virtuosity. Taking its title from the German designation of the pitch E-flat, it leaps and soars in a series of ejaculatory spurts that at times pierced the ears. Not unexpectedly, it also sounded the sole sustained foray into contemporary idioms.

Elena Kats Chernin’s Blue Silence is well known in its many guises. Still, this version sounded fresh and compelling, muscular and even menacing in its directness. It would be good to see EKC exploit the more individual characteristics of this ensemble and its players in new pieces.

Tristan Coelho’s four-minute piece for solo harp, The Old School, took its inspiration from a school house in the Blue Mountains where he and his partner, Emily Granger, stayed for a period. An attractive and unassuming piece, Coelho mingles the songs of children of past generations, as well as incidental sounds like the tolling of the school bell, tinged with echoes of Debussy.

The trio ended their hour-long program on an optimistic note. With its dance-like character and colourful, even filmic demeanour, Three Short Pieces by Sally Greenaway suggested the paintings of Brett Whiteley; perhaps it was the title of the second piece, Secret Garden, which led me down this path, or maybe the aural suggestions of Elena Kats Chernin’s opera based on Whiteley (2019). In any event, Greenaway’s unbridled piece sounded a cheery note to send the small but appreciative audience out into the world, refreshed, renewed and hopeful once more.

Let’s hope these players can extend their enterprise into further programs for this attractive combination. Overall, their performances were almost impeccable, engaging and even quite stylish. The musicians seemed to relish the very live acoustic of the MRC’s Salon, which often delivers a forte dynamic where the music requires more of a piano dynamic. Nonetheless, I hope that this trio will be invited to return to Melbourne on a regular basis, ideally bringing with them the new pieces they have commissioned.