The concert program entitled Oceans 13: Music out of the Blue promised some light-hearted entertainment, judging by its reference to the Oceans 13 film with its hip jazz score. A balanced program with some fun ‘out of the blue’ musical gems, as well as more serious pieces, might have been expected. With so many composers and poets engaging the sea as a central theme, it was surprising that this program left one underwhelmed and even disappointed by the end. The music chosen was neither bad nor uninteresting, while the quality of musicianship was as usual very high. But it offered almost entirely sad, depressing themes without much joy; the first three pieces ending on melancholic notes. French music, in particular, gives us many delightful light-filled musical images of the sea. Three French pieces were chosen in this program, but only one could have been described as uplifting.

As a presenter and the Master of Ceremonies, Damien Beaumont did a fine job and kept the conversation light and entertaining as he introduced the various artists and compositions. But despite his jovial nature, he could not lift the rather sombre mood of the evening. 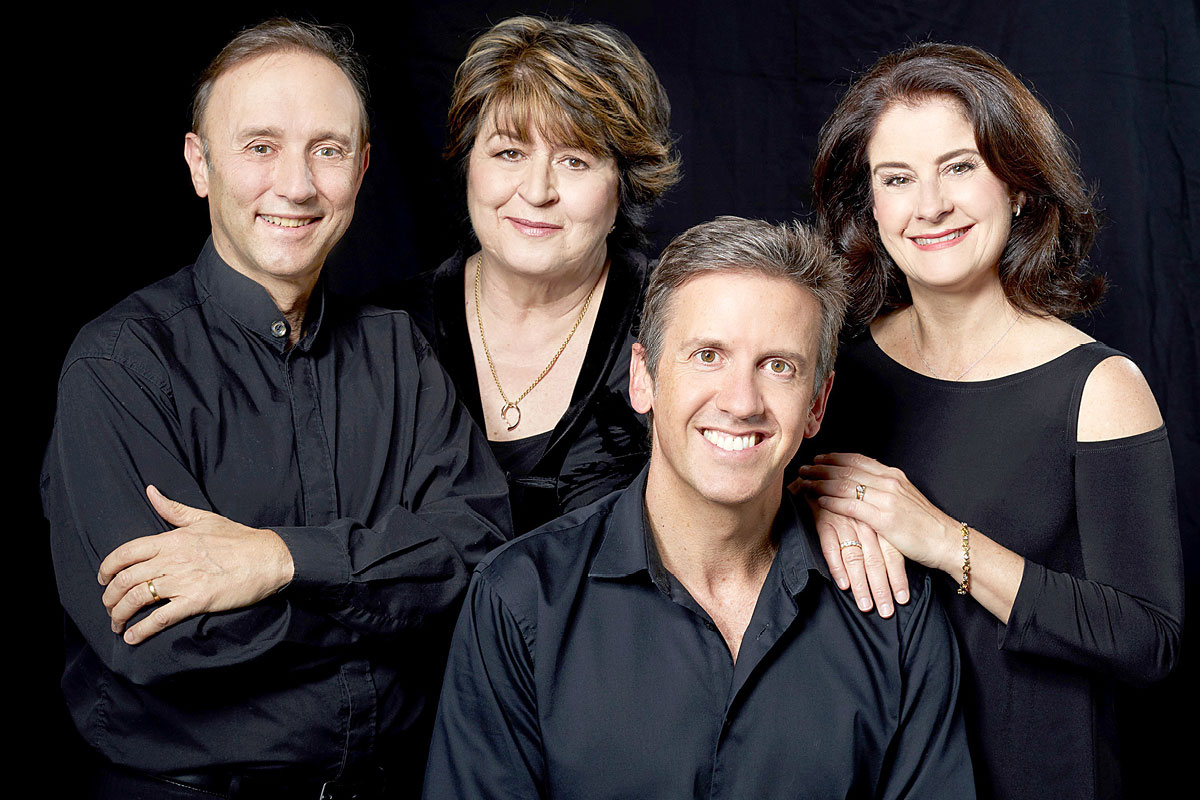 Chausson’s dramatic and haunting song cycle for soprano and orchestra, Poème de l’amour et de la mer, Op.19 opened the concert. Written in two distinct parts with a musical interlude, it tells the story of an island beach in summer where a poet meets his love but they part. In La Mort de l’amour he returns to find her but now being winter, everything has died. In early French Romantic style, the music is ravishingly beautiful, its dramatic writing giving it a distinct operatic feel. The Goldner String Quartet played brilliantly, with enormous passion and commitment, lots of shimmering strings and emotional intensity from the violins and viola. Julian Smiles’ impressive cello solos offered an intensely mournful journey. Pianist Daniel de Borah was fulsome and emotive throughout, giving full support in the heart-aching poet’s farewell, with some feverish playing in the interlude. Soprano Lotte Dean-Betts sang intelligently and with great feeling, her powerful voice with its rich, dark bottom notes and sensitively phrased top, perfect for this repertoire. It was a great start to the evening, though including the English translation of the French songs in the program would have been welcome.

This was followed by Toru Takemitsu’s work Toward the Sea for alto flute and harp, commissioned by Greenpeace for its Save the Whales campaign. Alison Mitchell on alto flute and Alice Giles on harp gave a marvellously fluid interpretation, beautifully paced and played. The evocative sounds of the sea from the flute, underpinned by the slow, dark, ponderous waves on the harp gave an ethereal and hypnotic feel to a work that was overwhelmingly sad rather than hopeful.

Composer in Residence, Paul Dean, presented the premiere of his short work, The Sea Meets Infinity, with himself on bass clarinet and Timothy Constable doing a sterling job on percussion and timpani. The mist blurs nature’s lines set the mood for being at sea in the fog, with a dark foreboding clarinet and underlying rumbling from the drum and glockenspiel. Tempest then offered all the force of the weather with heavy crashes, fierce drumming and a screaming clarinet, gradually subsiding into nothingness. Into the abyss was eerily quiet, giving us low grumbling notes of the dark sea as the boat sinks. It is a beautiful and compelling composition, which was extremely well played.

This was followed by two more upbeat and glorious pieces for piano that complemented each other. First, Ravel’s Miroirs: Une barque sur l’Ocean played quite beautifully by Daniel Grimwood. This gentle, impressionistic piece delivered the ocean swells, with its bobbing boat and the ebbing and flowing of the waves, through Grimwood’s rhythmic and precise playing. His fingers ran up and down the keyboard emulating the sea, his scintillating high notes showing sun shining on water, with threatening dark clouds in the middle and lower registers to reach a soft and expressive finale. Kristian Chong similarly delivered a very fine interpretation of Smetana’s On the Seashore – Reminiscence, Concert Etude Op. 17. With its colourful musical palette representing a windswept beach as the waters swell and the wind blows, it required a high level of technical virtuosity, which Chong managed particularly well. The imagery he evoked was easily visualised through his interpretation. Contrasting well musically and visually, the first was perhaps a Monet painting and the second a Turner.

One of the best-known classical works about the sea, Debussy’s La Mer – Three Symphonic Sketches was the final offering. Brought alive musically through his powerful orchestral imagery, La Mer offers a range of instrumentation to evoke sea and water imagery such as seagulls, waves crashing and various plays with light on water. Here re-arranged by composer Sally Beamish, for just three instruments, piano, violin and cello, the work was hard to recognise as Debussy with its glorious orchestral colours and textures and a lushness of strings, woodwind and percussion. All three players, Daniel Grimwood, Corey Cerovsek and Elina Faskhi, worked hard in this reworked piece to bring it to life. The strings shimmered, introducing as much musical colour as they could, while the pianist ran back and forth along the keyboard, with high octane levels, seeming to be the glue holding the piece together. The first movement seemed to bear little resemblance to the original, though more colour and texture with glimpses of Debussy were apparent in the second and third movements. What we heard was moderately interesting and inventive but it was not Debussy’s La Mer. Perhaps it might have worked with increased instrumentation but, as presented, this work should probably have been called La Mer – A variation.

My neighbours left at the interval, as did a number of other audience members, which was a pity as the second half had lighter elements that were perhaps more accessible or enjoyable. The concert did have some jewels, the Chausson a standout, but the program needed a rethink, with additional light touches to add balance and variety. And it would have been a nice touch to have changed the background colours of the atmospheric stage lighting for this concert from red or purple to blue, in keeping with the sea theme.