Given the dearth of mainstream opera currently available to audiences in Brisbane, it is to the credit of the Queensland Symphony Orchestra that it regularly programs concerts that include opera, showcasing not only orchestral opera overtures, but opera choruses alongside major arias and duets from the principal artists.

The luxurious casting of this Opera Gala produced a very high vocal standard. Soprano Natalie Aroyan, mezzo-soprano Deborah Humble, tenor Diego Torre and baritone José Carbó, all experienced major artists, have sung extensively around the world and with orchestras and opera companies in Australia. They did not disappoint with their range of both solo arias and duets. Equally as impressive was the Brisbane Chorale, trained by Music Director Emily Cox, who contributed strongly to the overall success of the Gala. The program was exciting and stimulating, offering not only some perennial operatic favourites but also interesting, lesser-known pieces. 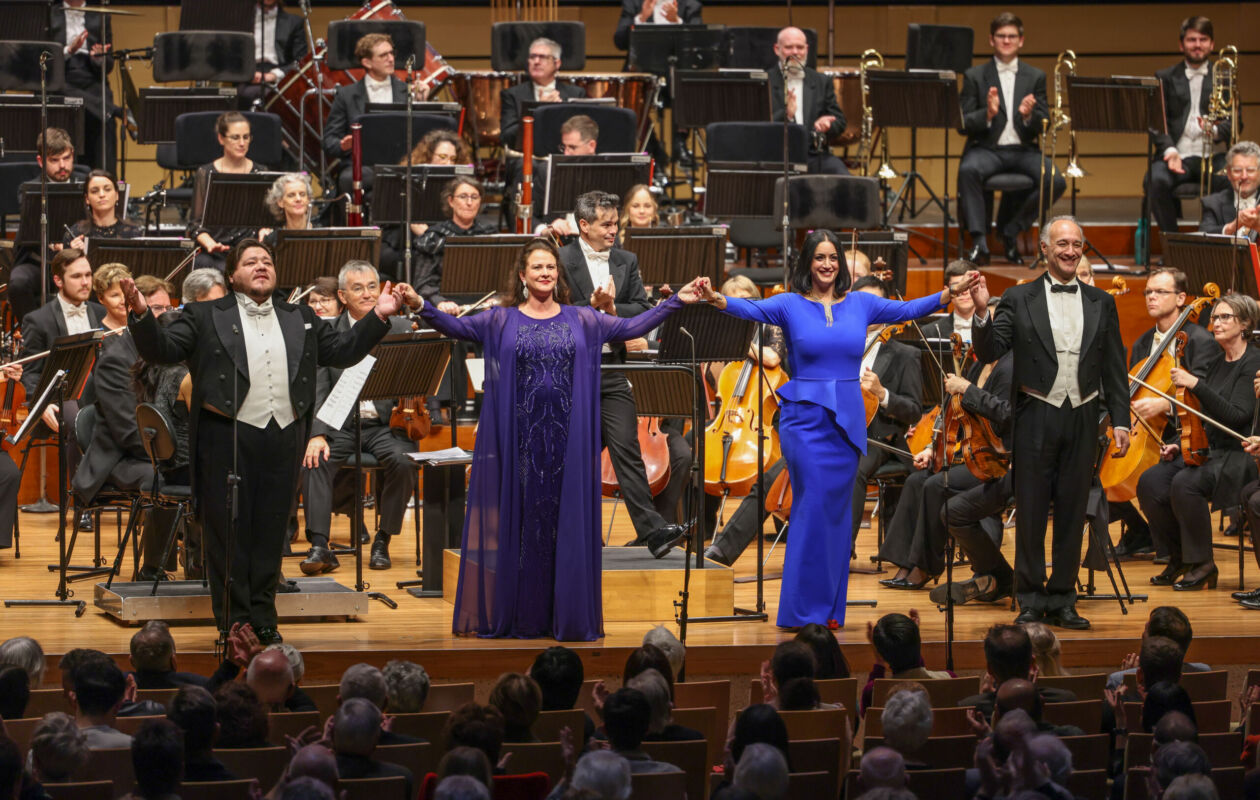 The concert commenced with a rare overture, Hymn to the Sun, from Pietro Mascagni’s opera Iris, making its Australian premiere 120 years after it was composed. This was a fascinating piece, celebrating the arrival of dawn, and was very well played by the orchestra. A whisper soft opening featuring the solo double-bass of Phoebe Russell, followed by light drum beats led to a slow, ponderous addition of celli and violi with additional chords by the harp. Gradually the volume swelled with violins and woodwind, increasing in sonority and joined by horns and brass. The mighty swell of the 85-person strong Brisbane Chorale helped to reach a magnificent climax of sound, as the sun rose.

This was followed by Puccini’s Madama Butterfly. The beautiful Humming Chorus was delicately played by the orchestra and touchingly sung by the female members of the Chorale. Natalie Aroyan and Diego Torre sang the glorious high-octane love duet Vogliatemi bene, their voices impressive and lush. Aroyen’s heart-felt lyric blending with Torre’s soaring top notes to produce a spine-tingling duet. The violin solos from concertmaster Natsuko Yoshimoto were splendid.

Three Verdi pieces closed the first Act. The Sanctus from Verdi’s Requiem Mass was solidly delivered by the Chorale, in four harmonious parts, while they displayed strength during the glorious Triumphal March from Aida, alongside excellent orchestral playing from the strings, woodwind and in particular the brass. Finally, the Tomb Scene from Aida, O terra addio, gave us ravishing legato from Aroyan as Aida, powerful ringing notes from Torre as Radames, and the understated Amneris of Humble, with her final chilling words, “pace, pace”. 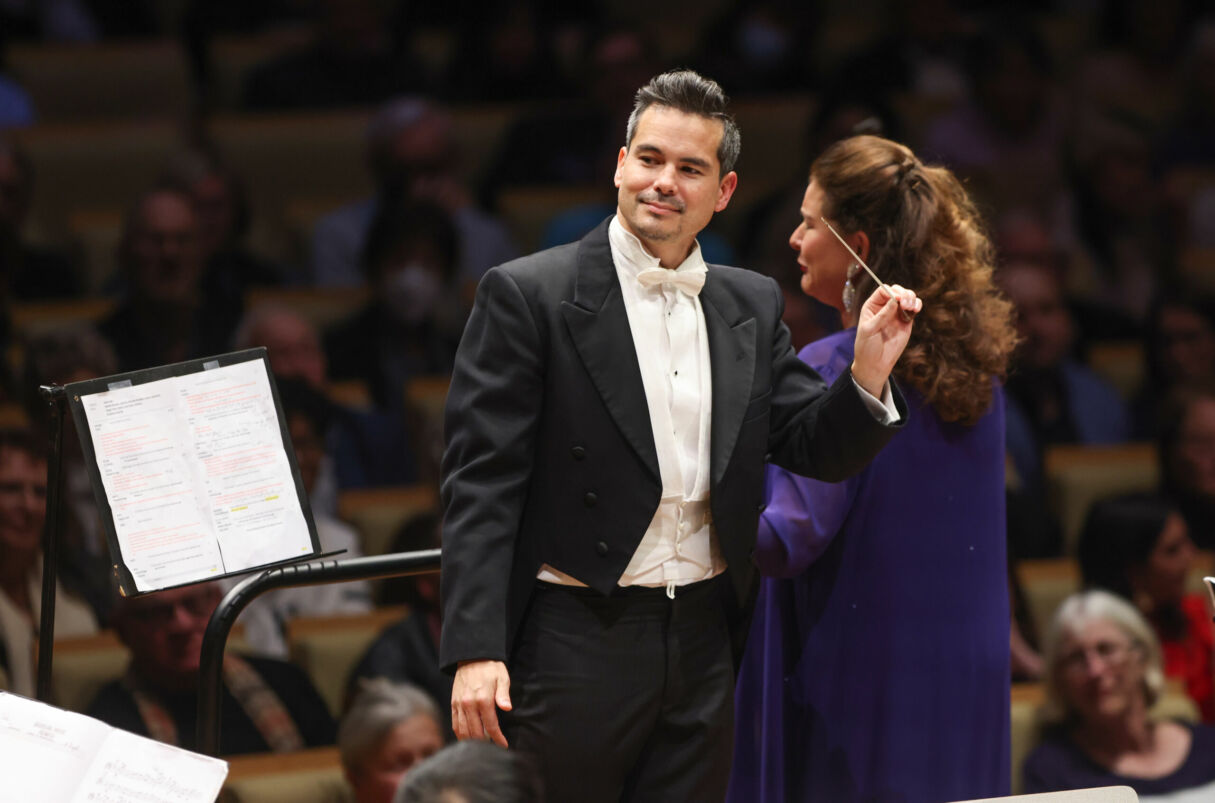 Not to be outdone, José Carbó gave us Tonio’s fabulous Prologue from Leoncavallo’s Pagliacci. He sung and acted this with a swagger and great enjoyment, solid across his whole register with some terrific top notes. Humble and Aroyen’s Belle nuit, ô nuit d’amour, the Barcarolle from Offenbach’s Tales of Hoffmann offered a lovely blend of vocal prowess between the dark mezzo and shimmering soprano. Humble followed this with a marvellous interpretation of Carmen’s famous Habanera, (L’amour est un oiseau rebelle), her rich, chocolatey sound note perfect and impeccable acting skills. José Carbó’s Toreador was also very well-managed, with fine legato and a strong delivery.

The concert ended as it had begun with another piece by Mascagni, the famous Easter Hymn from Cavalleria rusticana. Orchestra and Chorale were both exemplary, while Aroyan as Santuzza gave us a controlled performance, vocally strong throughout her range and with some first-rate top notes.

As an encore, we were treated to an astoundingly good rendition of the famous quartet from Verdi’s Rigoletto, well-played musically and with fabulous singing from all four soloists. Torre and Humble excelled in their respective roles as Duke and Maddalena, while a poignant Gilda (Aroyan) and a vengeful Rigoletto (Carbó) looked on in despair.

This well-constructed, thought-through program had a logic to both the choices and positioning. Conductor Dane Lam, who was also the host of the concert, played a pivotal role in introducing the repertoire and the singers, guiding the audience and providing links from one piece to the next. With his easy and confident manner, his role was invaluable. Moreover, he conducted with much joy and in an energetic style that was infectious, his precise beat and great attention to detail bringing out the best in his orchestral forces. Well-versed in opera and clearly an enthusiastic devotee, he is proving to be an excellent singers’ conductor and was instrumental in the success of this exceptionally good program.

In his program notes, Dane Lam stated that one thing all these operatic works have in common is ‘their ability to entertain, move and transform’. The concert did all three of those things extremely well and was moreover both joyous and polished at every level of its performance.