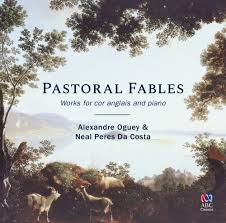 Don’t judge Pastoral Fables by its name. The album of arrangements for cor anglais and piano should be taken more seriously than the landscape in its cover; goats, shrubs, and all. Neal Peres Da Costa’s Viennese-action grand piano is remarkably light – so much so that Alexandre Oguey’s cor anglais sounds intense in full stride.

The cor anglais is certainly an instrument that shies away from the limelight; it is a delight to hear it brought into its own, and there’s scarcely a finer player to do the instrument justice. The opening Beethoven Sonata in F, Op. 17 is regally performed – perhaps reminiscent of its origins as a work for horn – and feels as bright as a young composer with “the world at his feet”, as the album’s notes state that Beethoven was at the time.

A substantial suite of works by Schumann is selected for arrangement, offering sensitivity and a delightfully personal approach. We hear keys, breath, and faint vibrato in the solo Alpenkuhreigen from Manfred, before a mildly pastoral Sonata in A Minor, Op. 105.

Brahms wraps up the album with a floating sonata in E Flat, Op. 120 No 2; a few intonation issues arise early on, but are not present for long. We fade away into Die Mainacht (May Night), Op. 43 No 2 – a splendid song that supposedly expresses loneliness but sounds, in fact, warming. A marvellous opportunity to grow familiar with the cor anglais.