For his new dance work, emerging choreographer Scott Elstermann has adapted the story of the 1911 Ballets Russes production of Petrushka for what he describes in the program as his first “full length contemporary dance” transposition. To be more precise, he claims to be “transporting the core elements” of the ballet – namely a love triangle between three life-size dolls who are animated by an evil magician – into the narrative setting of a 20th century tennis match.

It’s an odd but not unprecedented conceit. The Ballets Russes’ bad boy and modern dance wunderkind Vaslav Nijinsky (who played Petrushka) was to famously shock and confused audiences with his own 1913 work Jeux, featuring quasi-queer athletic poses adopted by three dancers dressed in tennis outfits. Elstermann however does not share Nijinsky’s fascination with hard, sexy bodies, or the then-new forms of modern athletics, nor Nijinsky’s tendency for elongated formal posing. 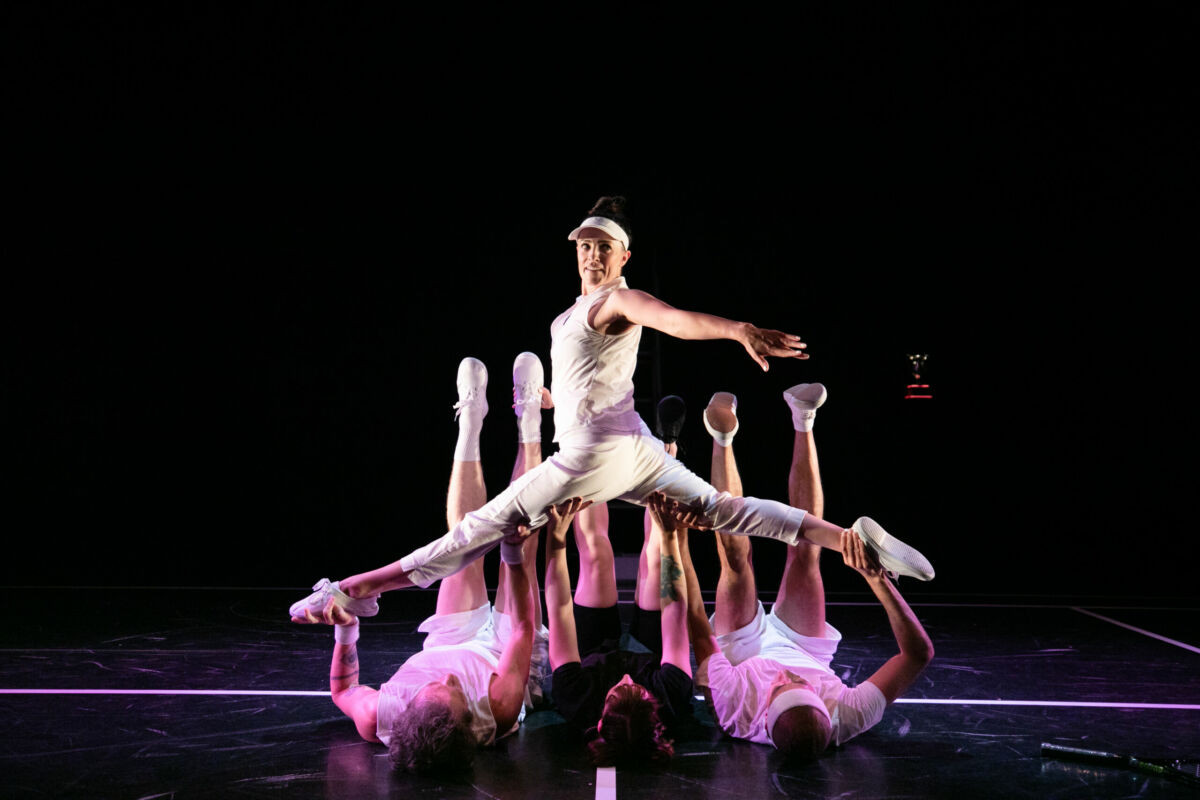 Elstermann by contrast floats his work on a sense of airy whimsy. Petrushka (Game, Set, Match) succeeds (if it succeeds at all) if one embraces this sense of fun. At its best, Game, Set, Match is delightfully silly, such as when an insouciant Laura Boynes as the love interest is balanced awkwardly on the feet of her competing suitors. Boynes, as in her fantastic solo Wonder Woman (2019), is just as happy to perform totally daft choreography as she is adept in more conceptual material. Her beaming indifference to the drama that surrounds her is a highlight of Game, Set, Match. 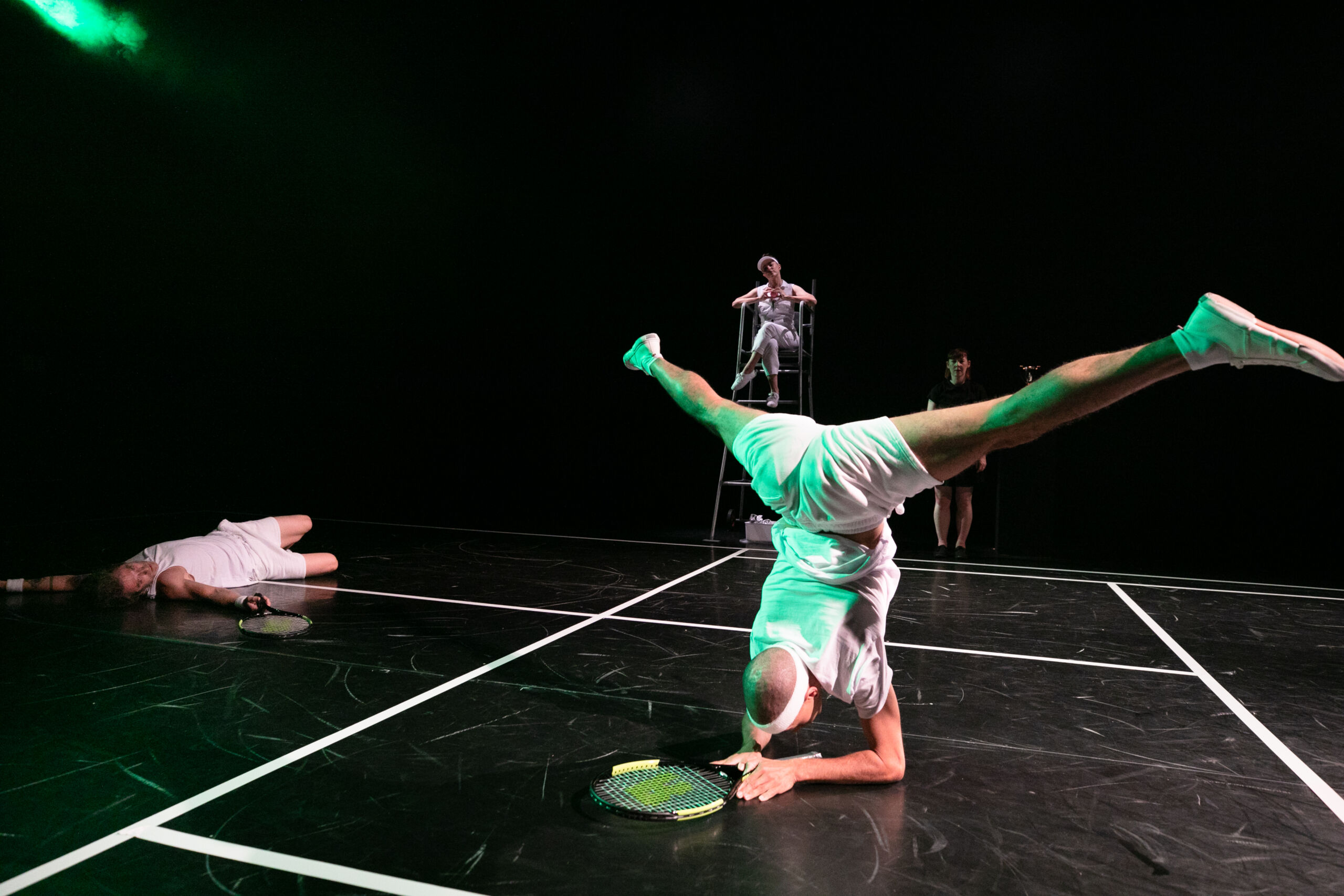 Tyrone Earl Lraé Robinson is both taught and teetering as the muscular tennis cheat who finally secures Boynes’ affections. David Mack as the shock haired tragic hero Petrushka is superbly floppy and imposed upon, his eyes beaming out his sense of injustice even as the magician’s hands and gestures force him to be less than his best. Elstermann casts the evil wizard as a woman: Bernadette Lewis appears in a simple but elegant black dress and dark lipstick (costumes Molly Werner), and the performance lifts as soon as she comes on stage. Her muscular sense of control in virtually lifting the puppets is both weighty and lyrical. Although this does make the wizard yet another femme fatale in a very long line of such figures throughout history, Lewis makes the role her own, and seems to love it. The enthusiastic commitment of the cast is indeed a strong part of the production’s appeal. 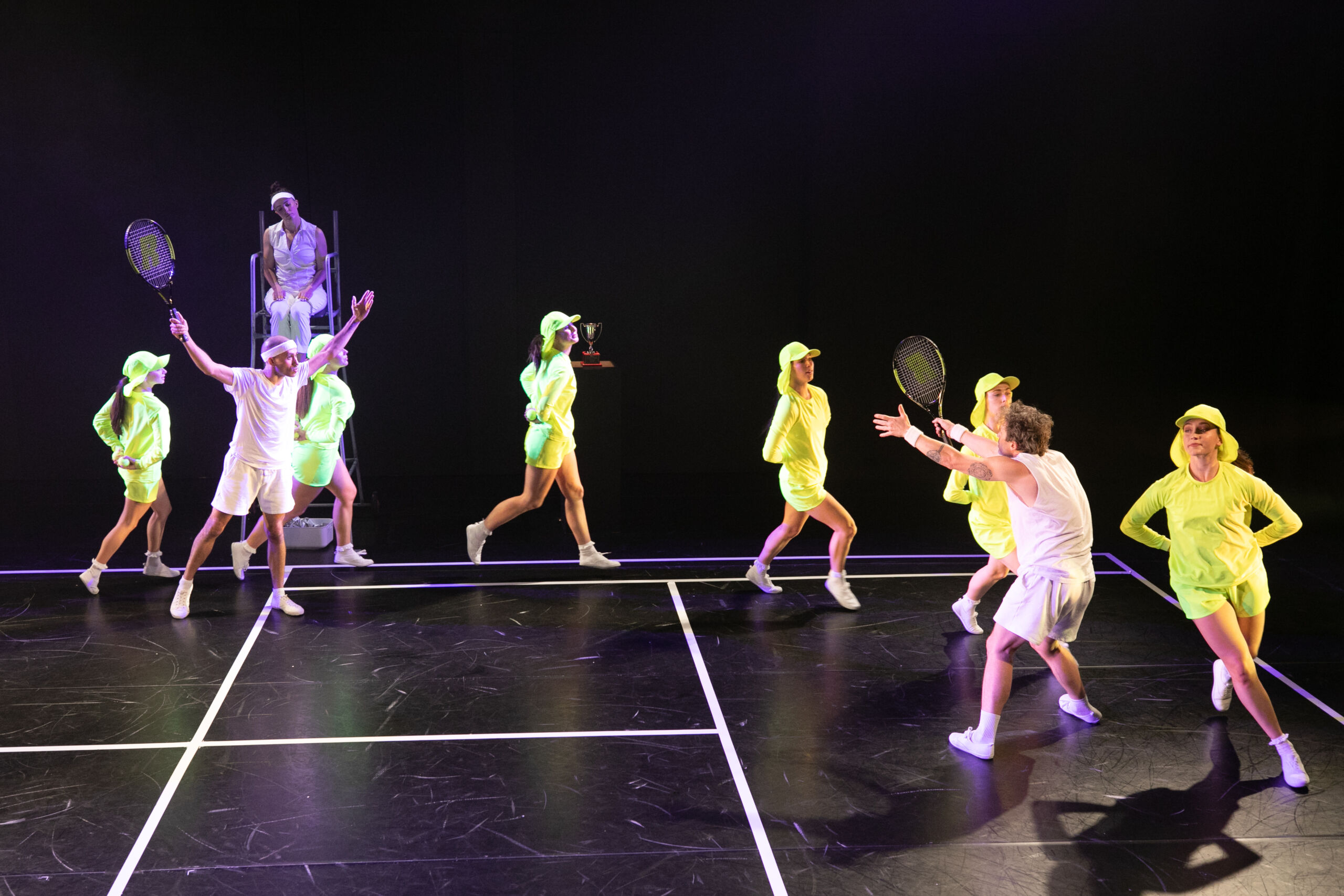 It’s all great fun if you let it be.

But I confess I struggled with the core conceit of this production, which can only be justified if one accepts – and I do not – that dance and ballet exist outside of cultural and political history.

Although staged in 2022, Elstermann’s version retains from the original that the one person of colour (Robinson) in an otherwise all-white narrative does not even have a name, but is simply given in the voiceover and in the program notes the racial designation of The Moor (sic). This makes even Othello look progressive. The Moor’s opposite number, by contrast, is indeed identified by name (Mack as Petrushka), and his anguished subjectivity performed outwardly. The Moor is however a shallow, smiling villain, cheating in order to win. 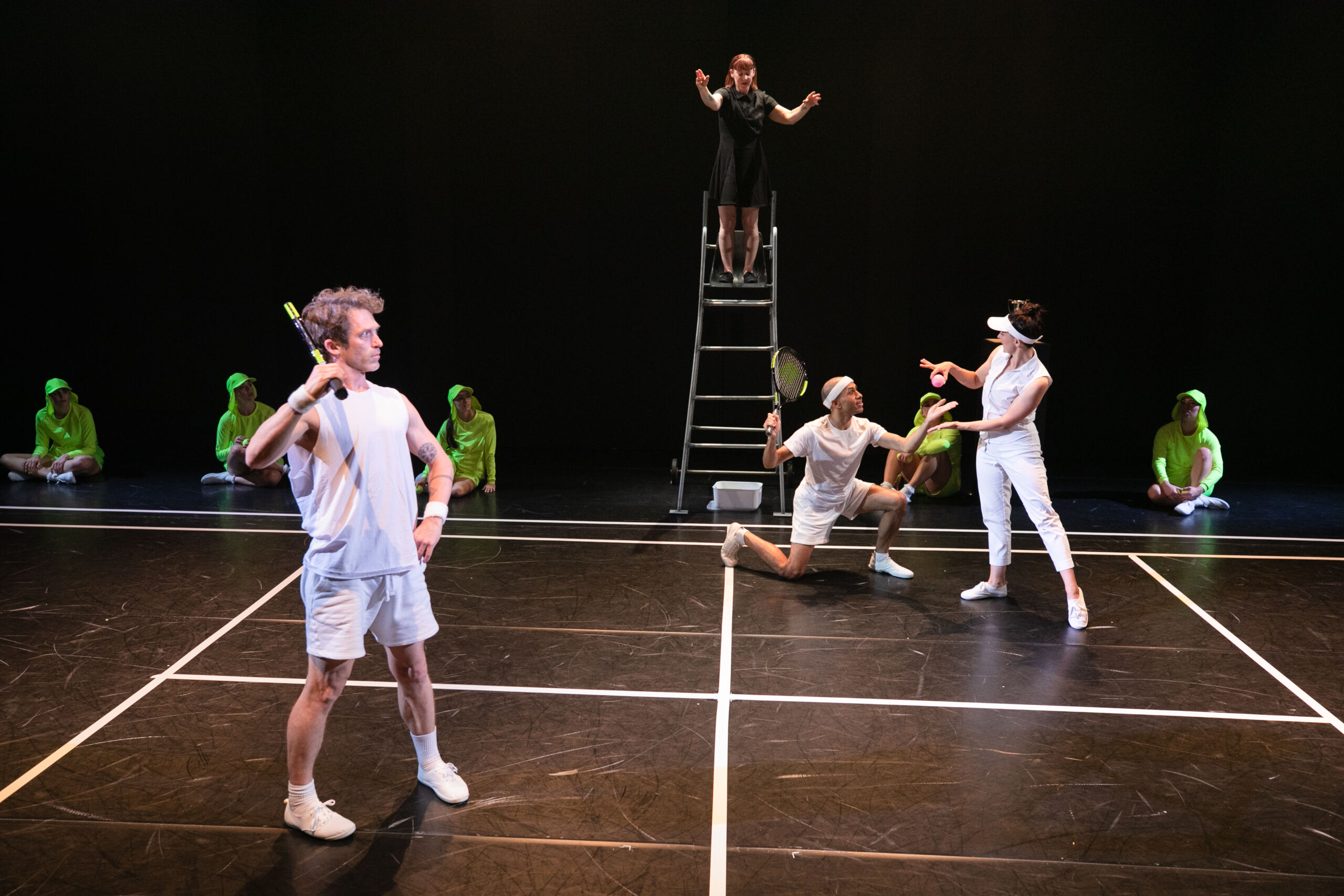 Elstermann has though mercifully cut the various ethnic dance interludes of the original, which were so beloved of the well-connected upper-classes of both Imperial Russia and colonial France, and which (ironically) continued to be popular in the USSR. At least in the wake of a new war over ethnic identity between Russia and Ukraine, we are now spared this element. But the ball girls (who replace the ethnic dancers) don’t add a lot more, and I must say that the depiction of an evil (if extremely charismatic and beautiful) Moor set against yet another virile straight man – both of whom are fighting over the possession of a third, mostly passive, heterosexual woman (assigned the role of the umpire, Boynes did at least get to call the shots!) – was hard to swallow.

Jeux was intended by Nijinsky as a metaphor for his ecstatic – if at times fraught and violent – experiences of cruising for anonymous gay sex in early 20th century Paris. Nijinsky’s later insanity, and the departure of his equally talented and edgy choreographer sister Nijinska, from the Ballets Russes left the company poorer, and Petrushka is not its best work, its early fame derived from Nijinsky’s striking, almost queer performance.

Stravinsky too would eventually retreat from his furious compositions for the Ballets Russes like Rites of Spring (1913) or The Firebird (1911). Although the program neglects to record the details, Elstermann uses not the original 1911 score but one of the toned-down reworkings which Stravinsky produced following World War Two, when the uncompromising spikiness of early modernism had come to be seen as problematic (the 1947 score as performed by the London Symphony). While conductor Rafael Frühbeck de Burgos brings out a few heavy percussive moments akin to Rites, this is a tame version—although arguably this suits Elstermann’s project better. 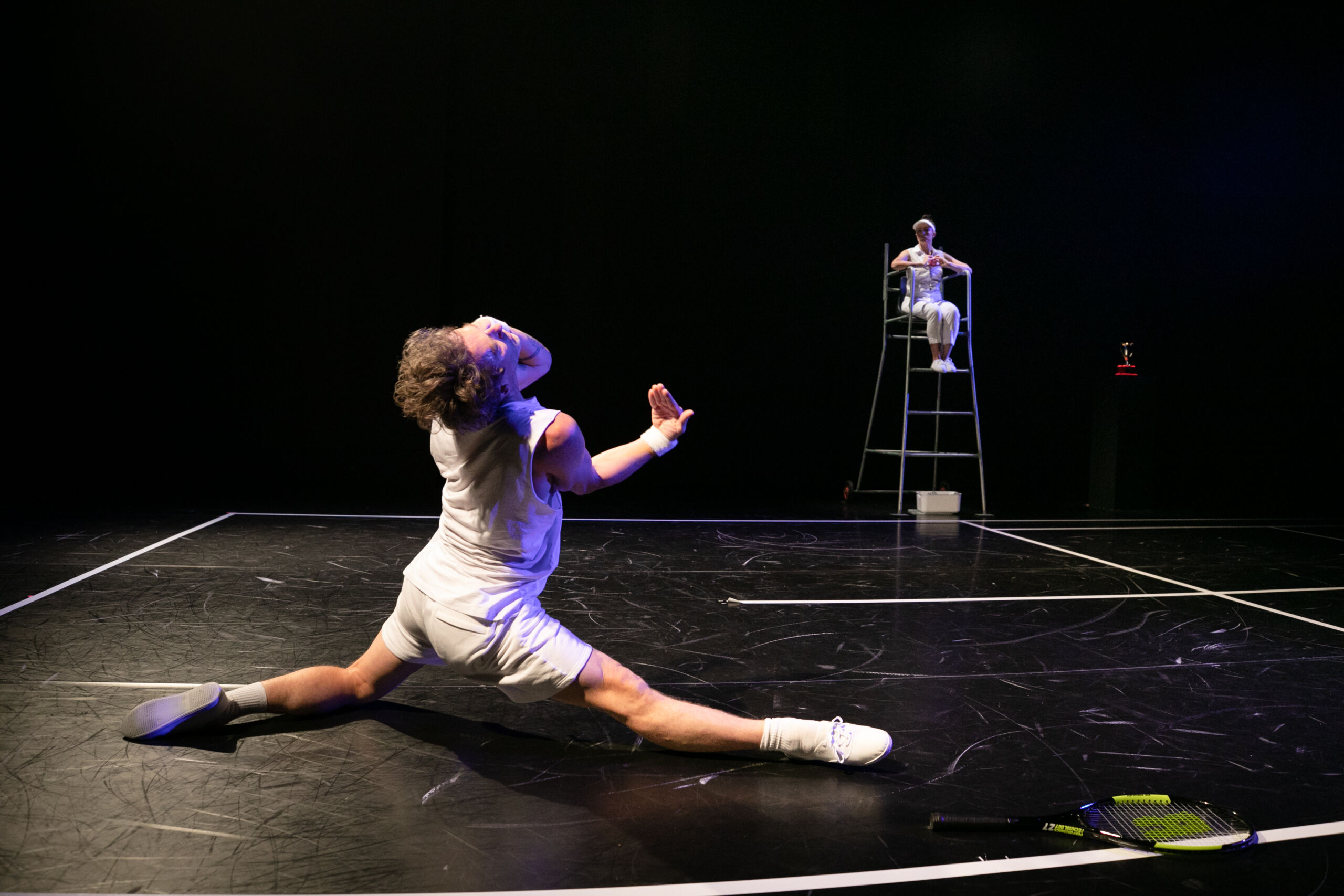 To be clear, there’s lots to like here. The lead dancers are great, and the combination of soft-toy-like folding with broken, acute angles in the bodies, is striking and well executed. There are also some particularly impressive moments where the men drop back, pushing their chests out until they curve upwards from head to toe, and then roll around each themselves like inverted wheels.

But for myself, the performance left a sour taste: not a production for the Black Lives Now generations.

The Russian dancer who battled schizophrenia, yet changed the face of ballet, is now a ballet himself. Continue reading Get unlimited digital access from $3 per month Subscribe Already a subscriber? Log in