Justin Martin’s London production bears all the hallmarks of a West End show (it sold out in days when tickets were released last year), its big drawcard being Jodie Comer, of Killing Eve fame. Comer, in her first stage performance since appearing a small production in Yorkshire when she was seventeen, has gone full tilt for this debut: her role is a demanding, unrelenting, 100-minute one-woman monologue. 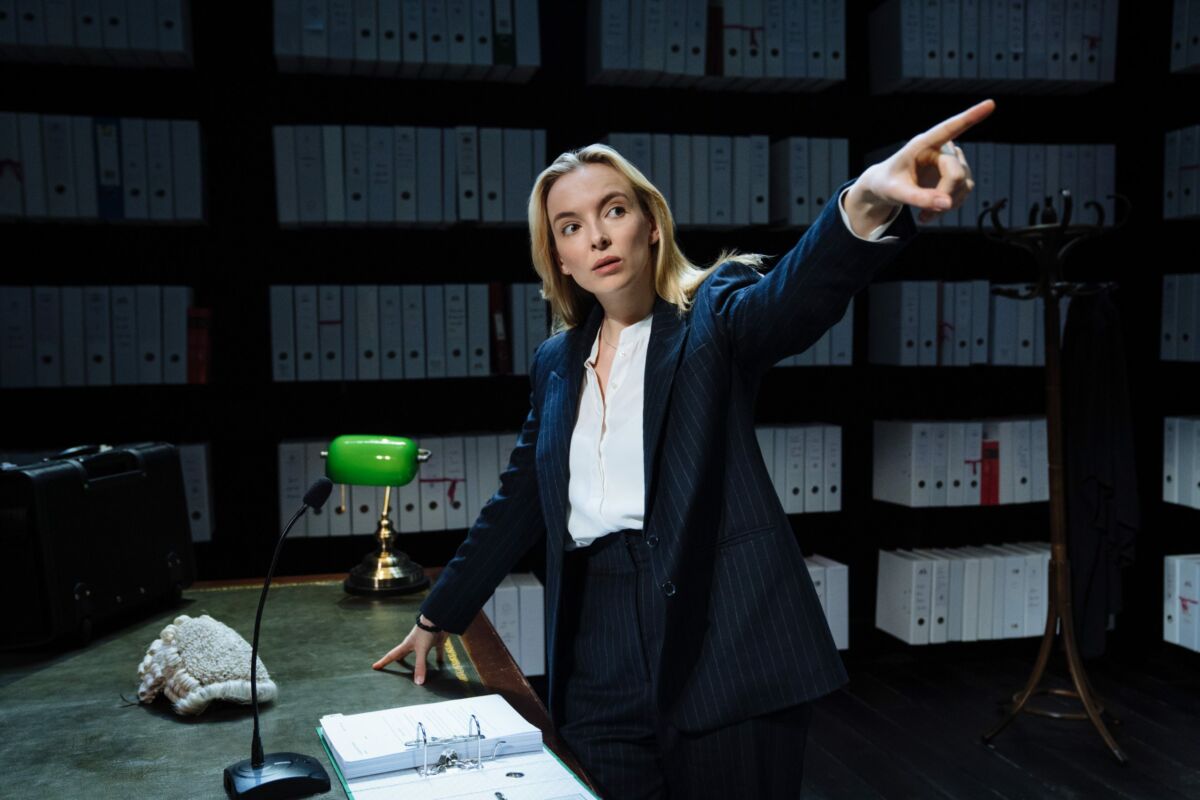 As the lights go up Tessa strides around this, her room in chambers, jumping on to one of the tables as she unravels her take on – and love of – the law and her work. Amid a torrent of words and movement, a rectangular neon strip of light that surrounds the stage flashes intermittently to emphasise certain lines, and music by Rebecca Lucy Taylor, aka Self Esteem, ramps up the atmosphere.

There has been much anticipation of Comer’s West End debut, and from the beginning she infuses Miller’s words with urgency, passion and wit: she is electrifying and occasionally a little camp (most barristers ham it up in court and Comer shows this side of the job with flair). Tessa unfolds her Liverpudlian working-class background (Comer’s accent ranges from thick Scouser to more Received Pronunciation depending on which part of her life she’s narrating), her run through law school alongside a swathe of privileged, privately educated peers, and her succession of triumphantly described wins defending men accused of sexual assault.

She is forced into a devastated volte-face when a colleague she’s slept with once before, Julian, rapes her in her flat. She is determined to elicit justice from the system she reveres.

Comer’s Tessa is driven, sweet, feisty and funny until this night everything changes for her, in a memorable scene Comer plays, at its outset, with dark humour – she is left vomiting into her toilet from too much booze – and then with horrified disbelief after Julian covers her mouth and forces her to have sex. The music, lighting (Natasha Chivers) and set design are leveraged to full effect: the morning after the assault, as Tessa trudges to the police station, torrential rain begins falling on the stage.

The emotional register is full-pelt throughout, with little room to draw breath – scenes run one to the other without many pauses. Tessa rips off shirts and trousers on-stage in costume changes. After the attack, she rails at the 782 days (counted up in big neon numbers above the stage) it has taken for her case to come to court.

Comer has been getting standing ovations, and she unquestionably deserves them: the energy and life she brings to this post-#MeToo story of the injustice rivet you to the seat. Hardly unprecedented when we think of Villanelle, but wondrous to see live.

According to the UK’s Office for National Statistics, in 2021, 41 percent of rape victims eventually withdrew their support for prosecution and only 1.3 percent of rapes were prosecuted. Comer’s compelling performance, at which she seems to throw every emotional sinew within her, is another call to actions to fix these endemic, gendered inequities.

If this content has raised any concerns for you, NSW Rape Crisis can be reached 24/7 on 1800 424 017. Other services which may be of assistance include Sexual Assault Counselling Australia on 1800 211 028. You may also consider speaking to a trusted source or engaging your local GP.

Lindy Hume’s reimagining of the Grimm fairy tale puts the Queen in the spotlight.