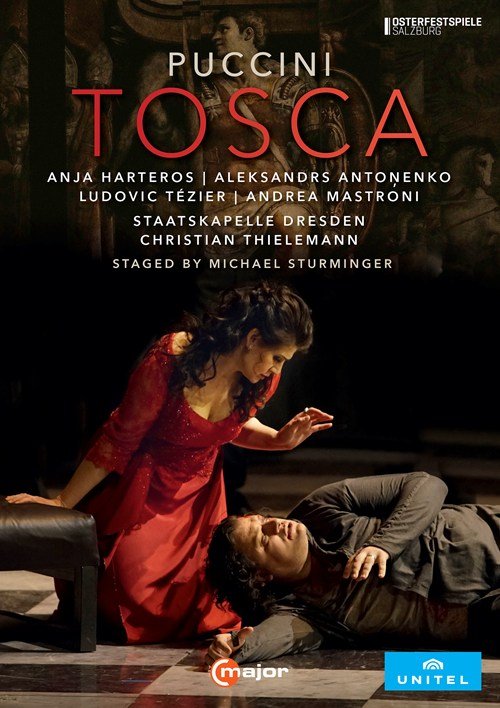 Once notorious for its shock value, Michael Sturminger’s decent, modern-dress Tosca from the 2018 Salzburg Easter Festival looks and sounds pretty good, but despite opening with sirens and a gun battle, it’s unlikely to ruffle feathers today. Billed as film-inspired, there’s little evidence of that in what is a fairly static staging. In fact, the innovations seem to be aimed more at the laudable aim of taking the romantic sting off things while building a convincing interpretation of the story for our times.

In Sturminger’s vision, Cavaradossi is a sculptor whose Recondita armonia is delivered as an art lesson to a group of schoolkids. Meanwhile, Scarpia is an unscrupulous, faceless political appointee and, according to the billboard, Il Divo is playing at the Vatican! Most of the ideas are sound, however, and there are genuine surprises at the end of Acts II and III – no spoilers. On the minus side, it’s unclear why children have to carry out Cavaradossi’s execution, while Scarpia’s exercise bike is just silly (and a singlet does him no favours).

Quite rightly, the star of the show is Anja Harteros, a seriously impressive diva who exudes class and comes bearing considerable interpretive insights. Her flexible soprano gleams with desire while throttling back to tease her hapless lover. When cornered, she’s the right sort of tiger to convince in the #MeToo age. Sadly, the once fine Latvian tenor Aleksandrs Antonenko has been caught mid-vocal crisis. He’s just about credible as a bespectacled leftist artist but, unable to manage his voice, he’s over-loud and equally unsteady. Ludovic Tézier’s pasty-faced slug of a Scarpia is a trifle reserved, but sufficiently creepy. His ringing baritone is comfortable and clear.

Christian Thielemann leads the excellent Dresden Staatskapelle in a punchy, detailed reading of the score. The sound is good, though Tiziano Mancini’s video direction might have been more imaginative. Three stars for the staging, with an extra star for Harteros and Thielemann.