The ever-impressive and endlessly intrepid Albion Records celebrates Vaughan Williams’ 150th birthday with a collection of rediscovered works by the British master – a remarkable five world premiere recordings – and a delightful choral arrangement of one of his acknowledged masterpieces for strings. 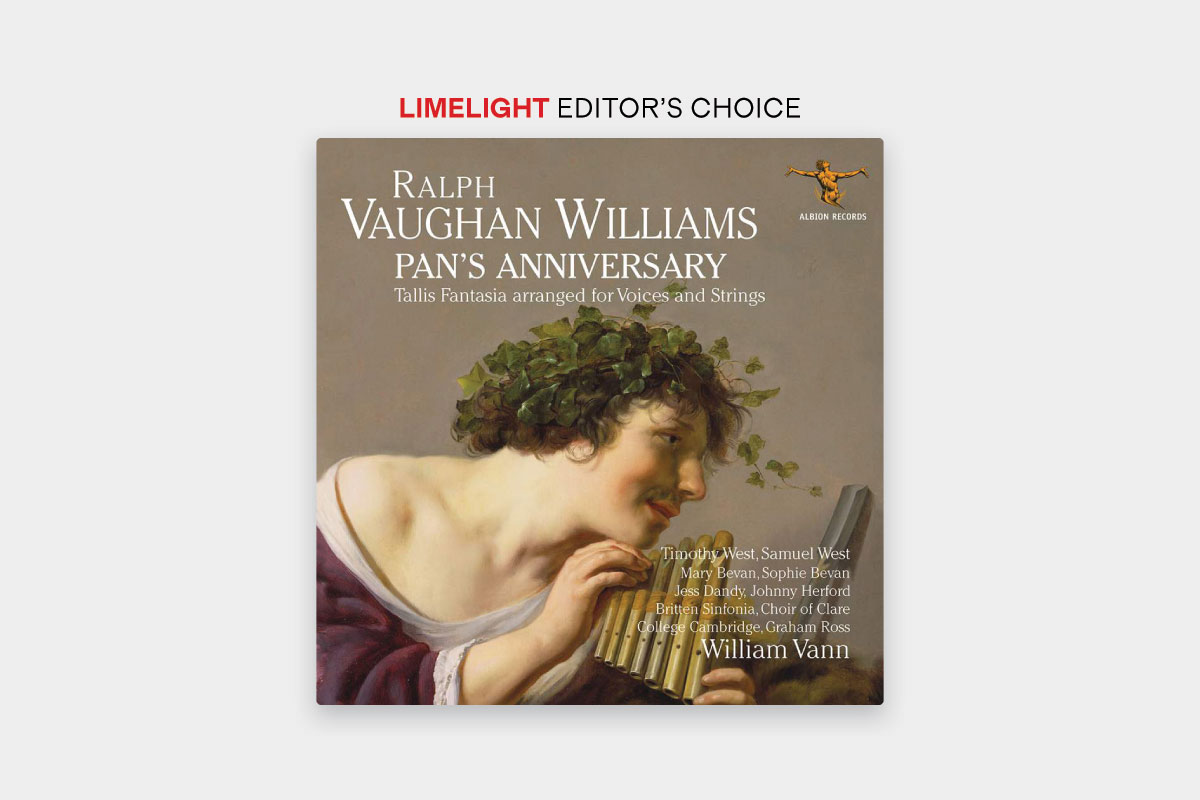 First out of the traps is Pan’s Anniversary, a masque by the Jacobean playwright Ben Jonson that would have originally featured musicians costumed as priests of Pan with King James I hailed as the goatish god himself (the mind boggles). In 1905 it was adapted for the Shakespeare Birthday Celebration at Stratford-upon-Avon with Vaughan Williams (“a very able and rising young man”) commissioned to set the choral and dance sections to music. It seems that he was so pressed for time that he roped in his friend Gustav Holst to work up some of the dance arrangements.

Set in ancient Arcadia, an aged shepherd encourages a trio of nymphs to adorn Pan’s altar with flowers and lead a series of choral hymns and rustic dances. The rites, however, are repeatedly interrupted by a rather self-important and garrulous Fencer with his gang of revellers disguised as sheep. The spoken roles here are expertly dispatched by father and son team, Timothy and Samuel West, while the nymphs are sung by Mary Bevan, Sophie Bevan and Jess Dandy. The scene settings and dance numbers are a tuneful mix of traditional folk and Elizabethan music with Thomas Gould, leader of the Britten Sinfonia, playing some in arrangements for solo violin with side-drum. Lovers of RVW, Holst and Grainger will enjoy a game of spot the tune.

By nature, it’s a slightly bitty affair, but the music is lively enough and played with spirit by the Britten Sinfonia under William Vann. At the work’s heart are four Hymns to Pan, and it’s here that Vaughan Williams shows his true colours in a series of lyrical gems. The Bevans and Dandy (the latter’s rich contralto occasionally a little raggedy) are ably supported by the Choir of Clare College, Cambridge.

Another find is Margery Wentworth to a text by John Skelton, perhaps an early go at a Skelton cycle before Vaughan Williams settled on the group of poems that he set in 1935 as Five Tudor Portraits. In case you’re wondering, Margaret (or Margery) Wentworth was the mother of Henry VIII’s third wife, Jane Seymour, and a cousin of both Anne Boleyn and Catherine Howard. It’s a lovely text – “With margerain (marjoram) gentle, The flower of goodlihead, Embroidered the mantle Is of your maidenhead” – and the setting for baritone soloist, ladies’ voices and orchestra, here orchestrated and edited by Australian composer Christopher Gordon, is ravishing.

Peace, Come Away and To Sleep! To Sleep! are a pair of Tennyson settings that Vaughan Williams set when he was a student, again orchestrated and edited by Gordon. They are sweet, but hardly distinctive RVW.

What is distinctive RVW is the Fantasia on a Theme by Thomas Tallis. Timothy Burke’s arrangement for voices and string octet was a lockdown project, here receiving its first recording with all the forces in the same room! The words are taken from Psalm 65 in Archbishop Parker’s Psalter, the source for Tallis’s original choral setting, and it works splendidly. Choral societies should be sending off for the score immediately!

Handel tribute album from fanboy Barnaby, a triumph of time and truth.

A pair of Baroque rock stars make a welcome return to centre stage.