Rameau’s opera-ballet Les Fêtes d’Hébé was one of the composer’s most popular works in his lifetime. It enjoyed nearly 400 outings after its premiere in 1739, its popularity only dimming after Rameau’s death 25 years later. Though slight on story, the lively, inventive score is irresistible, and one can only imagine the kind of spectacle houses in the 18th century would put on in staging this intriguing work. 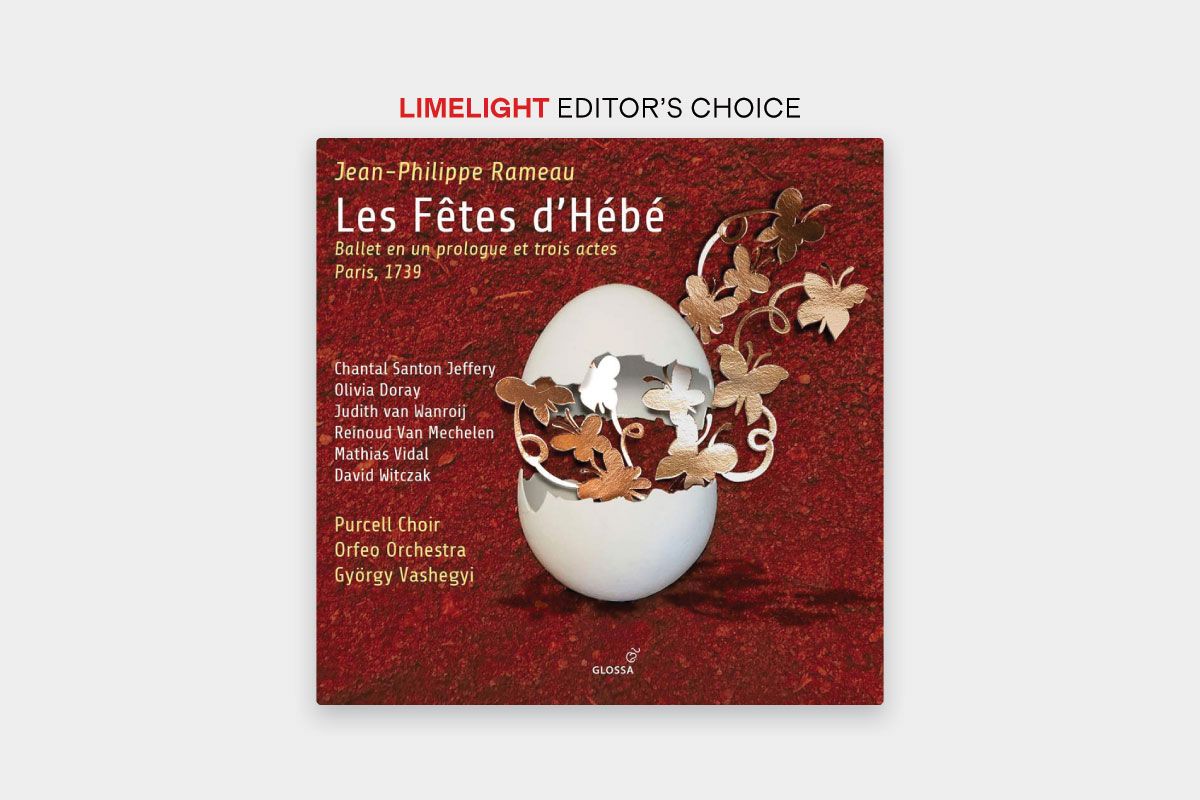 The opera begins when Hebe, the goddess of youth, quits Mt Olympus in search of diversion. She finds it on the banks of the Seine, where she observes and takes part in festivities celebrating poetry, music, and dance. These celebrations form the three acts of the opera, which freely intermingle singing and dance, and are populated by a cast of mythological characters.

A recording may feel like a slightly antithetical way to present something so dependent on the visual, but this latest release from Glossa featuring György Vashegyi and the Orfeo Orchestra quashes any misgivings you might have. The musicians play with a palpable sense of delight, and their interpretations are delicate but characterful. Textures are crisp across the board, the tightness of the strings are commendable, and there’s a rhythmic vitality to the dances that make this thin story feel utterly essential in the moment.

Vashegyi has also assembled a uniformly strong line-up of singers, nearly all of whom are French Baroque specialists. They bring an authority and dexterity to the language that can’t be faked and invest the opera with a surprising depth of feeling while never being short on charm.
Shining most brightly is the soprano Chantal Santon-Jeffery, who takes on Hebe and three additional roles to boot. Her instrument has an inherently dignified sound, with a shimmering dark colour that enchants the ear, and she skilfully balances the work’s whimsy with a sense of restraint. The composer’s trickier vocal writing poses no difficulties for her, with Santon-Jeffery dispatching the virtuosic passages with a sense of joyful ease.

Also worth noting is the performance of tenor Reinoud Van Mechelen, a singer of surpassing intelligence and feel for Rameau’s music. It’s a splendid voice, limpid and expressive with diction to die for, and he brings with him a sense of play and searching so that you’re never quite sure how a phrase will end. His rendition of Mercure’s aria, L’objet qui règne dans mon âme, is one of the high points of the recording, and he is sure to be an artist that listeners will want to keep tabs on. Soprano Judith van Wanroij is a similar welcome discovery for this reviewer, whose fruity, weightier instrument is used to great dramatic effect.

The Purcell Choir do themselves proud here, with superb ensemble, intonation, and balance. Vashegyi draws an exceptionally incisive sound from them, and like the soloists the Choir seem very well attuned to the expressive world of this repertoire. Most of all they, they embody the work’s spirit and elan, no mean feat.

Love it or hate it: this is probably the strangest Josquin disc you’ll ever hear.

Plenty of Spanish sizzle in this sometimes zany zarzuela.