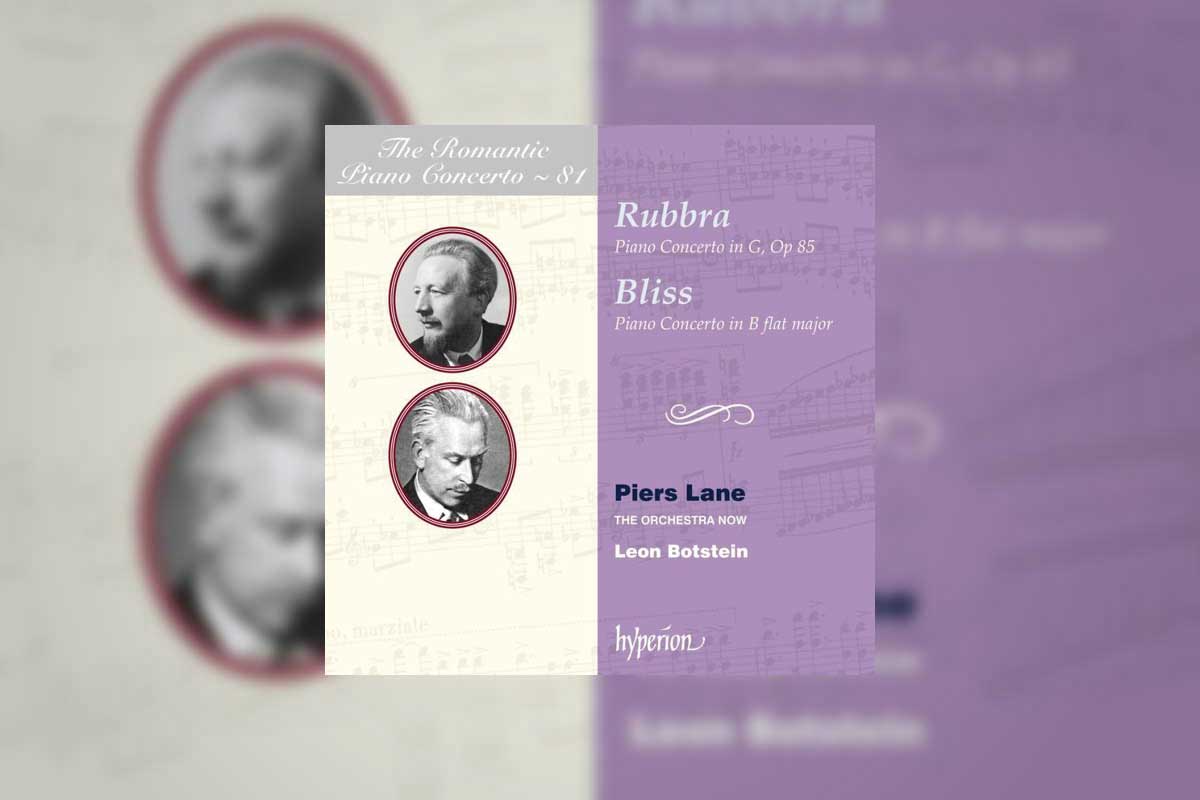 The Hyperion Romantic Piano Concerto series reaches 81 with this program of English piano concertos. While none hail from the Romantic period – they were written in 1938, 1946 and 1955 – two out of the three show a post-Romantic sensibility. Bax’s short Morning Song, written for his beloved muse Harriet Cohen, is a mood piece in the English pastoral style (though not without incident); a trifle, but a delightful one.

Arthur Bliss’s Piano Concerto, on the other hand, composed to impress the Americans at its premiere at the 1939 New York World’s Fair, is a lavish work in the style of Tchaikovsky or Rachmaninov. Lasting almost 40 minutes, it is structured in three movements: a feisty Allergro con brio, a yearning Adagietto, and a forthright Andante maestoso that closes with appropriate pianistic fireworks. It was premiered by the English pianist Solomon, and even that implacable virtuoso was stressed by the tricky double octave passage at the opening.

Edmund Rubbra’s Piano Concerto of 1955 is a different matter. Influenced by the Pakistani sarod player Ali Akbar Khan, it treats the piano in a quasi-improvisational way. Far from being confrontational in the heightened Romantic style, it amalgamates the piano into the orchestral fabric. Creating an elusive and introverted atmosphere, where even the solo cadenza just before the end is quietly musing, the concerto may seem impenetrable at first. It is worth persevering to enter Rubbra’s personal world, which is strangely affecting. Needless to say, the two main works require a contrasting approach from the pianist (and to a lesser extent, the orchestra).

Australian pianist Piers Lane gives outstanding performances, showing pinpoint accuracy in the challenging writing of the Bliss, and adapting comfortably to the introversion of the Rubbra.

As luck would have it, a disc in the Warners box devoted to conductor Sir Malcolm Sargent contains all three of these works, two played by the original performers. On that recording, Harriet Cohen plays Bax’s Morning Song in with straightforward delicacy, but the mid-1940s sound is outclassed by Hyperion. Another Australian pianist, Trevor Barnard, gives a sensational performance of the Bliss – his formidable technique ideal for the piece, as is the great Philharmonia Orchestra. Denis Matthews plays the Rubbra, which he premiered. It is always worth hearing the ‘originals’, but the new disc has the edge in sound, in Lane’s clarity and precision, and the fine orchestral contribution under Leon Botstein.

Piers Lane’s Rubbra, Bliss and Bax album is Limelight‘s Recording of the Month in July. Read our interview with Lane here.