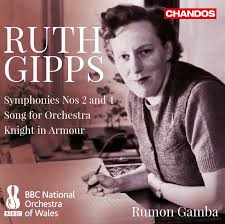 English composer Ruth Gipps (1921-1999) was a child prodigy who performed her first composition at the age of eight, won numerous performance competitions (piano), and entered the Royal College of Music on a scholarship in 1937 when she was 16 to study composition with Gordon Jacob and Vaughan Williams. A performance of her tone poem Knight in Armour was conducted by Sir Henry Wood on the 1942 Last Night of the Proms. Nearly 80 years later, it finally receives its premiere recording, along with her Fourth Symphony and a short work, Song for Orchestra.

Also included is her Symphony No 2 (1945), written as one movement but with three sections representing her life before, during and at the end of WWII. Symphony No 4 (1972) is dedicated to Sir Arthur Bliss, who championed it. Vivid and colourful, it features solos for cor anglais and oboe, instruments that Gipps had played working as a full-time musician in the City of Birmingham Symphony Orchestra during the war.

Gipps vigorously resisted serialism and avant-garde musical developments, preferring to compose in a more accessible yet distinctive idiom that contributed to her marginalisation during the 1970s. Nevertheless, these are rich, vibrant and exciting works performed with sensitivity by Rumon Gamba and recorded in pristine 24-bit brilliance by the Chandos team. A significant recording and a must for lovers of English music.

Reinvented Israeli composer gets reinvented for the 21st century.