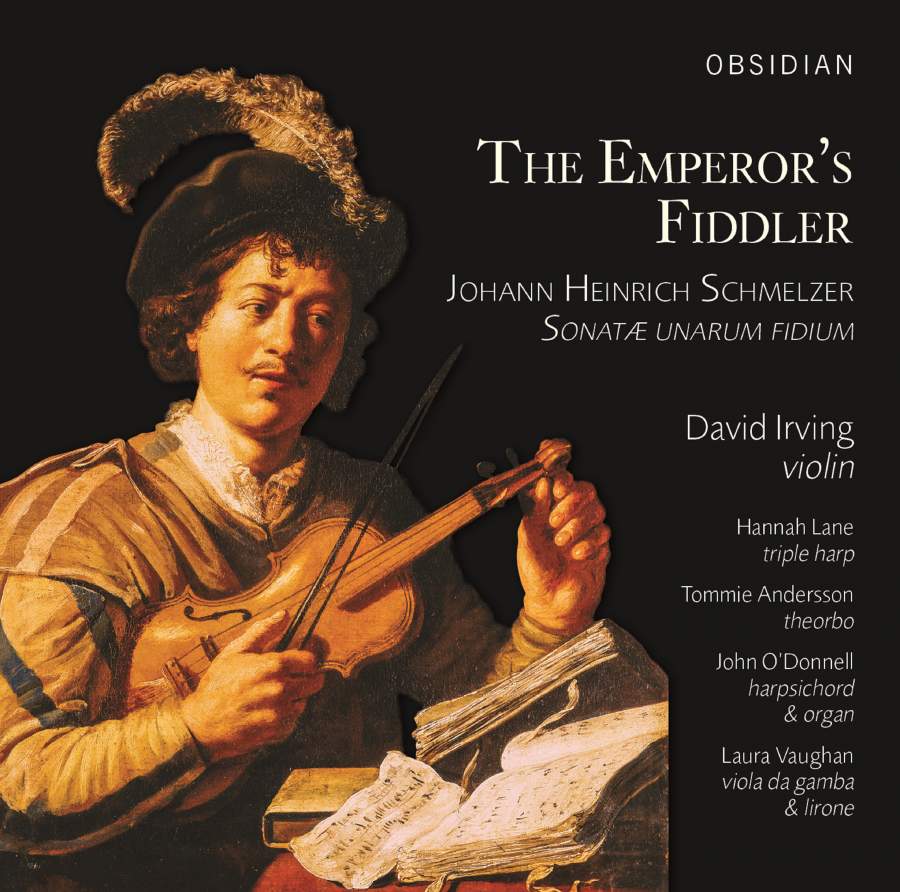 The significance of violinist and Imperial Kapellmeister Johann Heinrich Schmelzer (1623 – 1680) has since been overshadowed by Biber, but in his day he was one of the most famous violinists in Europe and the favourite musician of the Holy Roman Emperor Leopold I, who reigned between 1658 and 1705. Thus the name of Australian violinist and musicologist David Irving’s charming new recording of Schmelzer’s Sonatae Unarum Fidium on Obsidian, The Emperor’s Fiddler.

Schmelzer’s sextet of sonatas, which was dedicated to Cardinal Carlo Carafa (solidifying new political alliances) puns on the double meaning of Fides – it can mean “one fiddle” or “unified faith”. Indeed, there is an ecclesiastical air to these works, written in a more modal idiom than the music of the 18th century.

From the outset (the disc begins with the fifth sonata) Irving demonstrates a keen, characterful sound – the violinist plays ‘chin-off’, the Jacob Stainer replica strung in equal tension – a detailed, engaging sense of contour and agile technique. He is joined by Hannah Lane on triple harp, Tommie Andersson on theorbo, John O’Donnell on harpsichord and organ and Laura Vaughan on viola da gamba and lirone, in a line-up drawing on instruments known or guessed – through rigorous scholarship – to have been available at the court. The combination allows for varied textures and colours, resulting in a layered listening experience.

The sonatas are not divided into movements, but composed as unbroken, multi-sectional works, the ground basses weaving through the disc an effective unifying feature. The innocent opening of the Sonata Secondum, a simple theme soon treated with ever more elaborate variations, is quite affecting. The first bracket of sonatas finishes with the plaintive Sonata Tertia before Johann Caspar Kerll’s Passacaglia in D Minor, played on organ, provides both textural variety in the album, placed half way, and another contemporary example of a ground bass.

Offsetting the solo organ, the Sonata Sexta builds from violin and harpsichord to a denser accompaniment of plucked strings, a crisp texture contrasting with the sonata’s ‘slow movement’ where the violin is bathed in the warm glow of the organ. The performances are finely rendered: hear the aching, drawn-out phrases of the Sonata Prima’s opening, Irving duetting with Vaughan, or the sunny, wistful finale, the Sonata Quarta.

This disc is fascinating for its scholarship, but more, it’s a great listen. Irving and co prove masterful advocates of Schmelzer’s work, The Emperor’s Fiddler a cogent, beautiful argument for the composer’s revival and a more prominent place in the history books.

Rejoice, Melbourne music-lovers! The MBO has returned with an energetic and energising concert.

The High Renaissance choral specialists were in superb voice to celebrate one of their heroes.