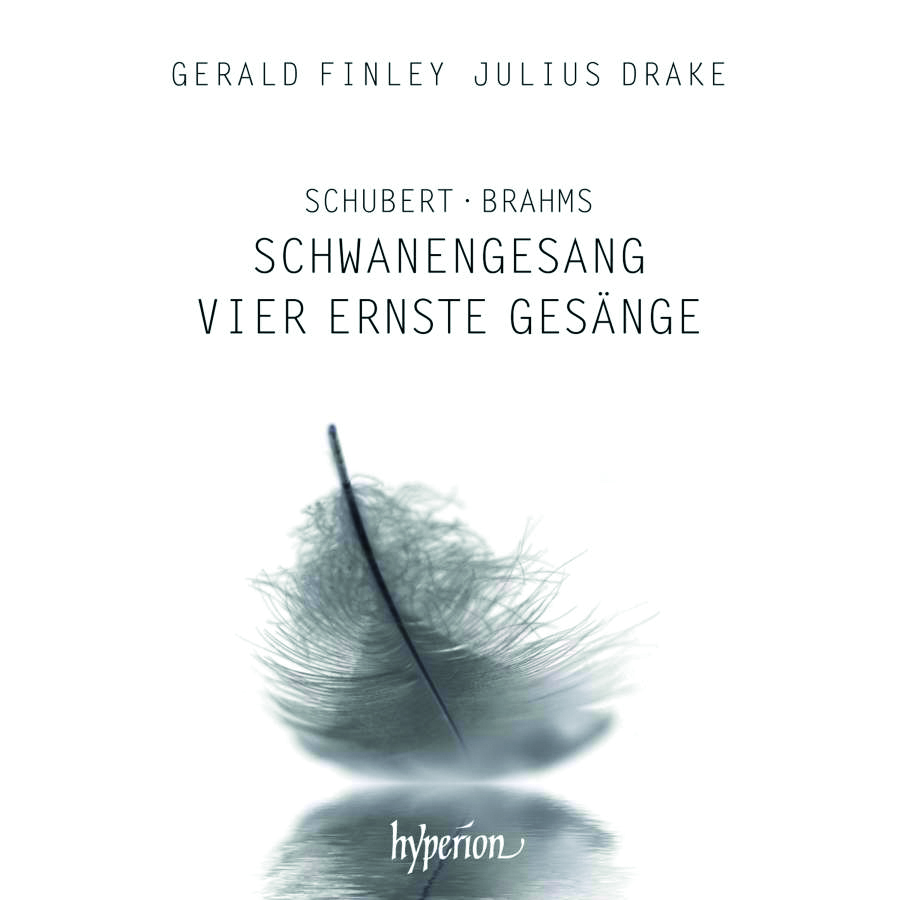 Canadian bass-baritone Gerald Finley never fails to amaze the listener with his versatility, whether it’s in his signature role as Robert Oppenheimer in John Adams’ Dr Atomic or Golaud in Debussy’s Pelléas et Mélisande, or just as one of our finest lieder exponents.

And his long partnership with British pianist Julius Drake yields another landmark recording with this latest release for Hyperion which neatly pairs Schubert’s Schwanengesang with Brahms’ own swansong, Vier ernste Gesänge.

Unlike Die schone Müllerin and Winterreise, both by the same poet and with a narrative thread, Schwanengesang is not strictly a song cycle, consisting of 14 settings of works by three poets published a few months after Schubert’s death to cash in on the popularity of the other cycles.

Austrian baritone Florian Boesch’s recording raised a few eyebrows when he dropped Die Taubenpost and divided the other two sets, inserting five song settings of Goethe. Finley chooses the conventional order and it’s interesting to compare his approach with two other superb accounts, both with Malcolm Martineau accompanying, by Boesch (2014) and a young Bryn Terfel (1991).

Take for example In der Ferne. The broken-hearted lover far away from home in Terfel’s hands is operatic and over the top, while Boesch exploits the emotional range with more subtlety, aided by Martineau’s painterly touch. Finley and Drake, on the other hand, bring a calmer, more sinister feel while putting more space around the lines and their relentlessly descending rhyming meter.

Finley’s full operatic range is on display in the first of the weightier Heine songs, Der Atlas, and in this set we are in bleak Winterreise territory with Ihr Bild and Der Doppelgänger and its terrifying climax when the narrator realises he is looking at himself, followed by its eerie fade in the final line.

Brahms’ four “serious” songs, rather than “sacred”, were written at the end of his life when the atheistic old man turned to the verses of Ecclesiastes and Corinthians for comfort and reflection on life. They are lovely autumnal works and Finley and Drake do them enormous justice.

At 59 the baritone is at the height of his powers. What’s next? Die Schöne Müllerin, perhaps?

Prohaska and Drake's intriguing programme of songs tells us all about Eve.

Heart of Darkness: How to stop worrying and learn to love this Bomb.

Plenty of Aussies and next year's Sydney Gurnemanz in Vienna's latest Parsifal.

Gerald Finley on why too few sing Sibelius

The Canadian bass-baritone says there's no excuse for the Finnish composer's songs not to be present in more recital programmes.

Editor’s Choice, Vocal & Choral – August 2015 When one considers Franz Liszt’s rapacious appetite for poetic stimulation, the exalted literary circles in which he moved and his inexhaustible creative drive, it should come as no surprise that he composed over 70 songs, although only a handful will be familiar to most lieder-philes. That may change thanks to this third volume of Hyperion’s latest project in the label’s seeming aim to record the entire art-song repertoire and the bringing on board of Canadian bass-baritone Gerald Finley will broaden its appeal.  The album spans some 50 years of Liszt’s career and demonstrates his wide ranging polyglot tastes and searching intellectual curiosity for source material. His harmonic and formal invention can veer from the exploratory to the mundane, but when taken on its own terms and delivered with this level of dramatic intensity it makes for a haunting 75 minutes.  Finley takes these songs by the scruff of the neck and gives them all the dramatic gesture and flair he can muster. The Petrarch Sonnets are here, but heard in the substantially revised second edition for low voice, their austere profile casting a darker shadow than the familiar soaring soprano version. The…

The Limelight Recording of the Year 2014

Canadian baritone Gerald Finley teams up with one of today’s finest accompanists, Julius Drake, to tackle what many deem the greatest song cycle ever written, Schubert’s Winterreise (Winter Journey). Winterreise, completed in 1827, can be seen as a sequel of sorts to his 1823 setting of Wilhelm Müller’s Die Schöne Müllerin. Here, the lovelorn miller who drowns himself in a brook becomes the lovelorn poet who drowns himself in his own tears as his icy journey exacerbates rather than assuages the desolation in his heart.  As the cycle plunges deeper into the dark recesses of that heart, it becomes apparent that Finley’s limber baritone and Drake’s seemingly orchestral palette not only admit of an infinite number of colours and shadings; in songs such as Auf dem Flusse, Der Greise Kopf and Der Leiermann they reveal an acute psychological understanding of how Schubert’s delicate art finds fertile soil in the penumbral regions where reality and dream become one.  Schubert’s cycle was originally conceived for tenor (and tenor du jour Jonas Kaufmann has recently recorded Winterreise), but there is something in Finley and Drake’s febrile introspection and collective musical and poetic intelligence that recall Peter Pears and Benjamin Britten’s classic 1963 recording,…