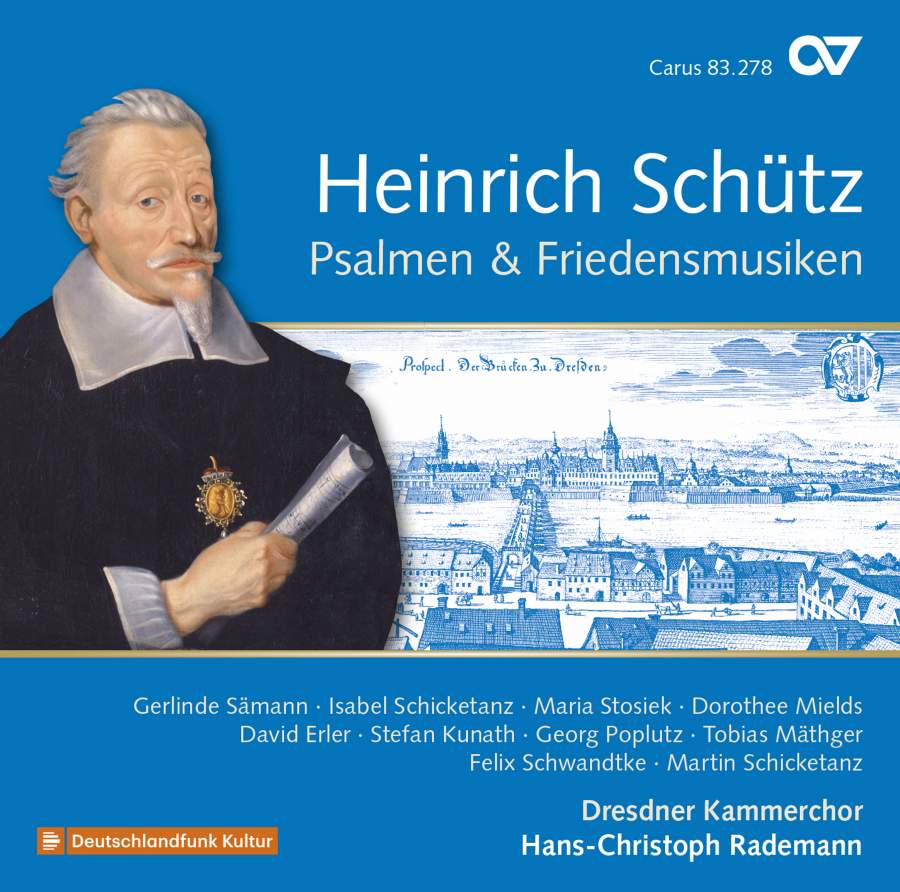 As Dresden Chamber Choir director Hans-Christoph Rademann writes in his notes to the 20th and final volume in this magnificent recording project (over 500 works!), “To what can the effect of this wonderful music be attributed? When listening to the music of Heinrich Schütz we can see with our ears – and hear with our eyes.”

Championed by Moritz, the Landgrave of Hesse-Kassel, in whose care he had been placed by his father in 1599 as a talented 14-year-old, Schütz would, after formative studies in Venice especially, over the next decades produce some of the most refined, dramatic and innovative vocal and choral music of the 17th century, from madrigals and psalm settings to occasional works as well as  passion settings.

The larger works in particular demonstrate the profound influence of the Venetian school, especially Monteverdi – the dramatic declamation, the florid solo ensembles, the spectacular polychoral effects, the antiphonal brass choirs, the contrast between syllabic and melismatic treatment of texts, the vivid word painting…

Rademann again writes: “With Schütz, music and language create a wealth of images which not only our minds can absorb, but also our bodies. So, a perception of clarity is created which can also be described as a form of truth or of discovery. In this music we admire the combination of words and music, we hear a sound world of images and are transported in the most beautiful sense into a harmony of intellect and feeling”.

There is certainly a spaciousness, a splendour and a grandeur emblematic of infinity in Schütz’s settings, in which arrows fly (Wo der Herr nicht das Haus baut), tears gush forth (An den Wassern zu Babel), prayers are sent heavenward (Das ist mir lieb) and more.

But the last work in this final volume of what is a major achievement and gift to music lovers everywhere, finds Schütz sounding a more intimate tone, with the Trostlied, for a cappella choir, bewailing the death of an infant while submitting
to God’s will.

And what of the performances, by the choir, a large team of soloists including soprano Gerlinde Sämann, mezzo-soprano Dorothee Mields, tenor Georg Poplutz and baritone Martin Schicketanz, and an orchestra comprising violins, gambas, recorders, sackbutts, cornets, dulcian, violone, theorbo and organ?

These are performances as perfectly passionate, and passionately perfect, as Schütz’s music itself. But be warned: after listening to this, you’ll want, as I have, to collect all 20 volumes.

A welcome exploration of the younger, more intimate Schütz.

This ensemble Schütz and scores with music of the next generation.

This fascinating program replicates the second half of a charity concert given by Carl Philipp Emanuel Bach in Hamburg on Palm Sunday 1786 (the first half comprised the Sanctus from his father’s B Minor Mass and excerpts from Handel’s Messiah) and this recording was made to celebrated the 300th anniversary of the composer’s birth and serve as a sampler of the various styles of “the New Bach”.  His Magnificat from 1749 typifies his Janus-like profile in 18th-century music looking back to the High Baroque style and closely following the formal plan of his father’s 1723 example with a similar sequence of choruses, solo arias and duets, yet throwing open the shutters of dusty old tradition and letting the musical light of ‘Reason’ flood in.  The bustling Italianate style is overlaid with a cleaner vocal line that looks ahead to the later Classical manner yet still incorporates those exuberant curlicues of ornament that were once condemned by some as mere Rococo fluff.  One catches the occasional glimpse of the Empfindsamkeit sensibility for which he is famed in the Magnificat, but those sudden flickers of changing mood are at their most distilled strength in the D Major Symphony with its quirky harmonic…