The Bachs, the Mozarts, the Mendelssohns, the Strauss dynasty: history is full of famous musical families. Now comes the UK-based Kanneh-Masons: seven musically-talented siblings who have just embarked on their first Australian tour. 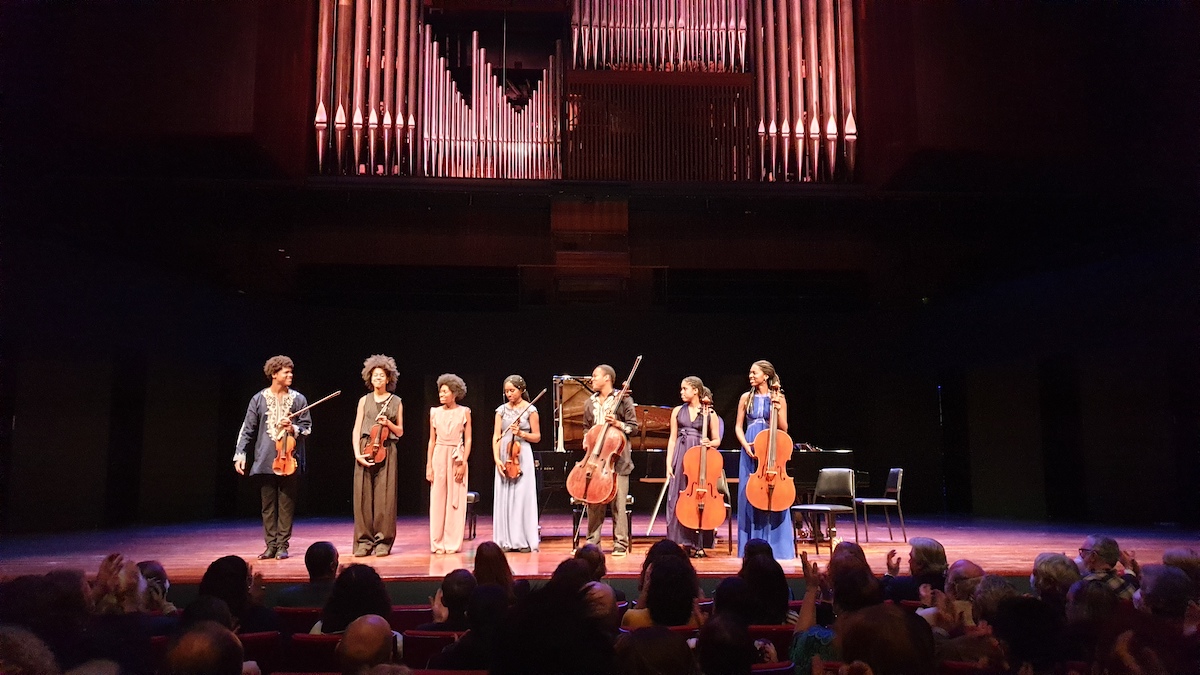 Twenty-three-year-old cellist Sheku Kanneh-Mason shot to popular fame in 2018 after performing at the Royal Wedding of the Duke and Duchess of Sussex at Windsor Castle. But he’d already hit the headlines before that by winning the 2016 BBC Young Musician competition.

Since then, Sheku has performed widely and to much acclaim, including at the BBC Proms. He has also released a string of successful recordings on the Decca label, of which my favourite is still a remarkable account of the Elgar Cello Concerto.

His sister, the 26-year-old pianist Isata Kanneh-Mason, is almost as well-known, having received the 2021 Leonard Bernstein Award and scoring a UK Classical Chart’s No 1 hit with her Decca release Romance – The Piano Music of Clara Schumann.

And it was in the company of these two fine musicians that we spent the first half of this Perth concert, which marked the beginning of the family’s tour.

Sheku and Isata bookended their cello and piano recital with searching, soulful and technically faultless accounts of Frank Bridge’s and Shostakovich’s Cello Sonatas (both in D Minor).

In some ways this was a courageous decision, given the audience would not necessarily comprise the usual classical buffs. This proved the case, with much clapping between movements (gracefully acknowledged, it must be said, by the duo).

In other ways it was a sure bet, especially with Bridge’s passionate and entirely accessible Cello Sonata, which can so beautifully evoke the music of Cesar Franck and Brahms, amongst others.

In between, came a punchy Gershwin Prelude for solo piano from Isa, the D Major Mendelssohn Song without Words for cello and piano, and Maria Theresia von Paradis’ Sicilienne (also famously performed by Sheku at the Royal Wedding).

Following interval, we were introduced to the rest of the Kanneh-Mason family: Braimah (24, violin), Konya (22, piano), Jeneba (19, piano), Aminata (16, violin), and Mariatu (13, cello). And what a gorgeous picture they presented, all gathered on stage together. One hopes they harmonise at home as well as they do on stage!

Of the full ensemble pieces, the standout was Eric Whitacre’s Seal Lullaby (arr. Parkin) was the most successful, the simple melodies, gentle rhythms and wistful harmonisations rendered with feeling and a terrific ensemble. The Fiddler on the Roof material was also a lot of fun, while providing a showcase for Braimah’s exceptional violin-playing.

Other highlights for me included a magical performance of the Andante con moto tranquillo from Felix Mendelssohn’s Piano Trio No 1, with Jeneba, Aminata and Mariatu (why not Clara Schumann’s G minor Piano Trio?), a sparkling account of Schubert’s Impromptu Op. 90 No 2 in E-flat by Konya and a thrilling Hungarian Rhapsody No 2 (Liszt) from Jeneba that brought the house down.

For my tastes, the first half of the recital was more focused and satisfying. The second half had too much of the variety show flavour about it. But what an opportunity, what an experience for the younger members of the family! And what warmth, connection and immense musical talent shown across the entire concert!

For these reasons, and for my other observations above, and for a vague suspicion that in being there we might have become a part of musical history in the making, and since we can’t hear the Bachs, or the Mozarts, or the Strauss family – the Kanneh-Masons are a must-see.