Seldom have two idiosyncratic talents combined with such wit and artistry as violinist Patricia Kopatchinskaja and cellist Sol Gabetta, long-time collaborators on the concert platform and friends off-stage, produce in this effervescent exercise in musical acrobatics. 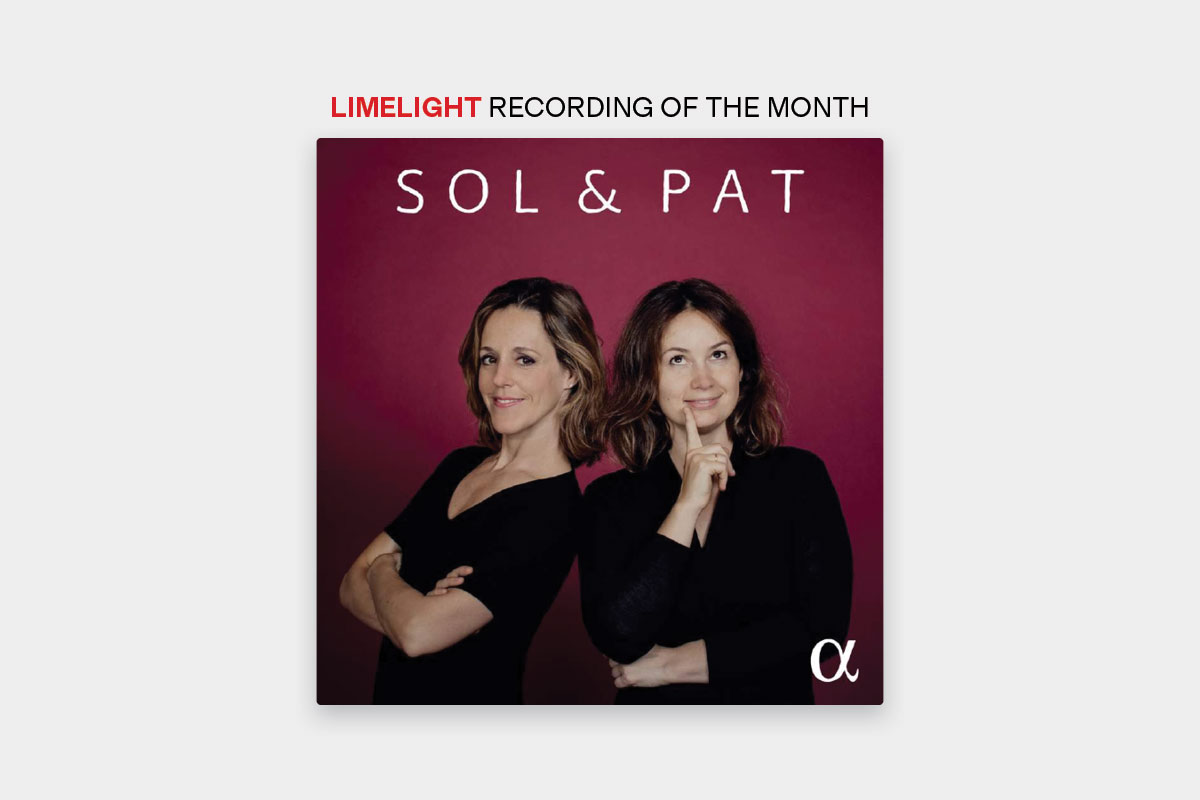 Sol & Pat is a duo recital re-cast as a jugglers-on-a-high-wire circus act, with a dash of clowning adding colour to the excitement. It’s the product of two distinctive instrumental voices: the ever-quirky Kopatchinskaja, fresh from her Pierrot Lunaire, as electric as it was exotic (reviewed 20 April 2021), and Gabetta, a cellist who has developed her own distinctive style and here allows it full exuberant reign.

Central to the violin-cello repertoire, Ravel’s A Minor Sonata and Kodály’s D Minor Duo provide the chiaroscuro-contrast centrepieces. Ravel’s Debussy-dedicated Sonata is a vinegary, concentrated, pungently realised work. Kopatchinskaja and Gabetta treat its restless counterpoint with a deference matched by the deliberateness of their choices elsewhere, not least in the animated outer movements and achingly elongated third movement.

Both relish the gipsy-like euphoria that drives Kodály’s elaborately conceived Duo, pitching it as a wild fantasy, lacing its ecstatic euphoria with the exquisite agony of the Adagio –Andante and keening, folk-like songfulness of the third movement.

It is in the companion pieces, ranging from Bach to Ligeti, that Sol & Pat turns in one scene-stealing, show-stopping performance after another, beginning with a delightfully zesty account, hinting at intoxication, of Leclair’s Tambourin in C, their laughter at its end an apt prelude to what follows.

And there’s something of the scrambled, dehydrated mind in Marcin Markowicz’s Interlude, a miniature lent maximum impact by Kopatchinskaja and Gabetta’s pointedly precise but athletically free-flowing playing that conjures a veritable maelstrom of sound.

Despite the pair admitting (and identifying), in the free-wheeling conversation that passes for a booklet note, to playing two wrong notes in Francesco Coll’s Rizoma, it still rings true with acerbic, judiciously paced bite.

Ligeti’s Hommage À Hilding Rosenberg is tautly realised, Xenakis’s Dhipli Zyia is delivered true to Kopatchinskaja’s description of it as dancing “with long and short strings, large and small, low and high. The rhythms are human ones, sometimes limping, sometimes bouncing on the wrong beat”.

Bach père et fils, JS and CPE, provide moments of relative respite, albeit bent through the peculiar prism of these two artists for whom eccentricity provides the key to unlock and reveal new facets. The son’s pointillistic pas de deux Presto and the father’s Prelude No 15 from his Well-Tempered Clavier, an appropriate leave-taking epilogue, are delivered with due and becoming balletic poise from both participants.

Quixotic, though it is, Sol & Pat is also a vivid display of fireworks and finesse from a crisply recorded duo keenly responsive to each other. Would that all duo performances had this same balance of acumen and adrenaline.

A highly expressive account of an early operatic masterpiece.

Beautifully performed, but promises more than it delivers.

Argentine cellist Sol Gabetta catapulted into public consciousness when she won the Crédit Suisse Young Artist Award in 2004 and subsequently debuted with the Vienna Philharmonic and Valery Gergiev. She was 23 then, but had won her first competition at the age of ten, and now enjoys a hectic international career as one of the world’s most famous and highly-regarded cellists. Her wide-ranging repertoire includes three albums of works by Vivaldi and his contemporaries, recorded with Capella Gabetta, the ensemble she founded with her brother Andrés. In addition to core 19th-century repertoire, she is also committed to contemporary compositions, and has recorded an album of works by Latvian composer Pe¯teris Vasks which included his Second Cello Concerto, written especially for Gabetta.  This latest album features two 20th-century masterworks – the first, arguably the most famous cello concerto in the repertoire; the second, virtually unknown by comparison. Elgar’s concerto was written in 1919, with the dark pall of WWI hanging heavily upon its composer, who wrote, next to its entry in his catalogue of works, “Finis. R.I.P.”. Its 1919 premiere was a disaster, and it languished in popularity until recorded by Jacqueline du Pré in 1965 (incredibly, she was only 20) and her technically…

★★★★☆ A title like The Chopin Album, might lead you to expect a disc from the latest pianistic talent, but happily on this occasion it’s a collection of repertoire for cello and piano duo from close friends, cellist Sol Gabetta and pianist Bertrand Chamayou. The stunning centrepiece is the significant Cello Sonata in G Minor. The complexity of the first movement alone is a marvel, and it’s a shame the piece isn’t more widely known. Gabetta talks about approaching Chopin as a bel canto composer, who was always aware of a ‘vocal’ line in the music. It’s a fitting analogy and Chamayou and Gabetta show great sensitivity towards the primary melody, while still uncovering Chopin’s rich polyphony. The Largo movement is achingly beautiful, without becoming too overly sentimental.  The militaristic Polonaise Brilliante provides both Chamayou and Gabetta with plenty of virtuosic scope and both performers relish the opportunity. The remainder of the album serves as a tribute to the friendship between Chopin and respected cellist Auguste-Joseph Franchomme. The two men co-authored the Grand Duo Concertant and worked independently on arrangements and transcriptions of Chopin’s music. An original work of Franchomme’s is included on the album, the Nocturne for Cello and…

What do you do in your spare time if you’re the world’s best selling female cellist? Go poking around in a Bavarian castle for undiscovered repertoire, of course. The third instalment of Sol Gabetta’s Vivaldi project blows dust off Italian concertos from the library of the cello-playing Count Shönborn, alongside four popular gems from the Red Priest himself. From the moment she enters as soloist in the opening Vivaldi concerto in A Minor, RV422, it’s clear the chops justify the sales. She draws out the melodic line like spun gold, with detailed trills, flowing phrases and buoyant, textured passage-work rather than just busywork. In the Allegro of Zani’s concerto she imaginatively bends the tuning to her will. The brother/sister duo with violinist and concertmaster Andres Gabetta offers a refreshing take on Vivaldi’s Concerto for Two Mandolins in their own arrangement for violin and cello; the tone colour of each instrument is distinguished from the other, piquant and punchy, particularly when they echo one another in close repeated phrases. The Chelleri G Major concerto, with its memorable first-movement ritornello, has a blend of stately bearing and rollicking energy as played by the 16-strong ensemble. But despite the immediate charm of the…

Patricia Kopatchinskaja is the latest phenomenon in the galaxy of young violinists who seem to excel at everything they undertake. Following up her Gramophone Bartók/Ligeti/Eötvös Recording of the Year, here come the Stravinsky and Prokofiev Second Concertos. Both were composed within five years of each other but could hardly be more different. Indeed, the Prokofiev inhabits a different universe from its playful neo-classical precursor. Kopatchinskaja states that the work indicates an exquisitely creative “re-ajustment” to Prokofiev’s return to the Soviet Union, an acceptance that “this is the sort of music you have to compose.” She captures the emotional ambiguity of the work perfectly: the uneasy stirring of the G minor opening and the subsequent lyricism tinged with bleakness, her tone impressively kaleidoscopic, alert to every emotional nuance (as are Jurowski and the LPO). The spiritual core is the central movement with its ‘raindrop’ accompaniment – a radiant, rhapsodic oasis, shot through with shards of intensity. The finale seems to tap into Kopatchinskaja’s Moldovan roots: earthy and uncomplicated on one level yet maintaining headlong relentlessness to the last. The Stravinsky is, by contrast, a hard nut to crack, stylistically and psychologically. It took the composer down a path alien to the Russia he’d abandoned,…