This Sydney based saxophone quartet has had great success in repertoire running from Bach to the Weimar period. In fact, their last release (Ballads of the Pleasant Life on ABC) saw them providing appropriate accompaniment for the dependable baritone Peter Coleman-Wright in songs by Kurt Weill, Eisler and even early Schoenberg. Tango de Saxos sees them in repertoire from South America with particular emphasis on the late tango meister Astor Piazzolla. 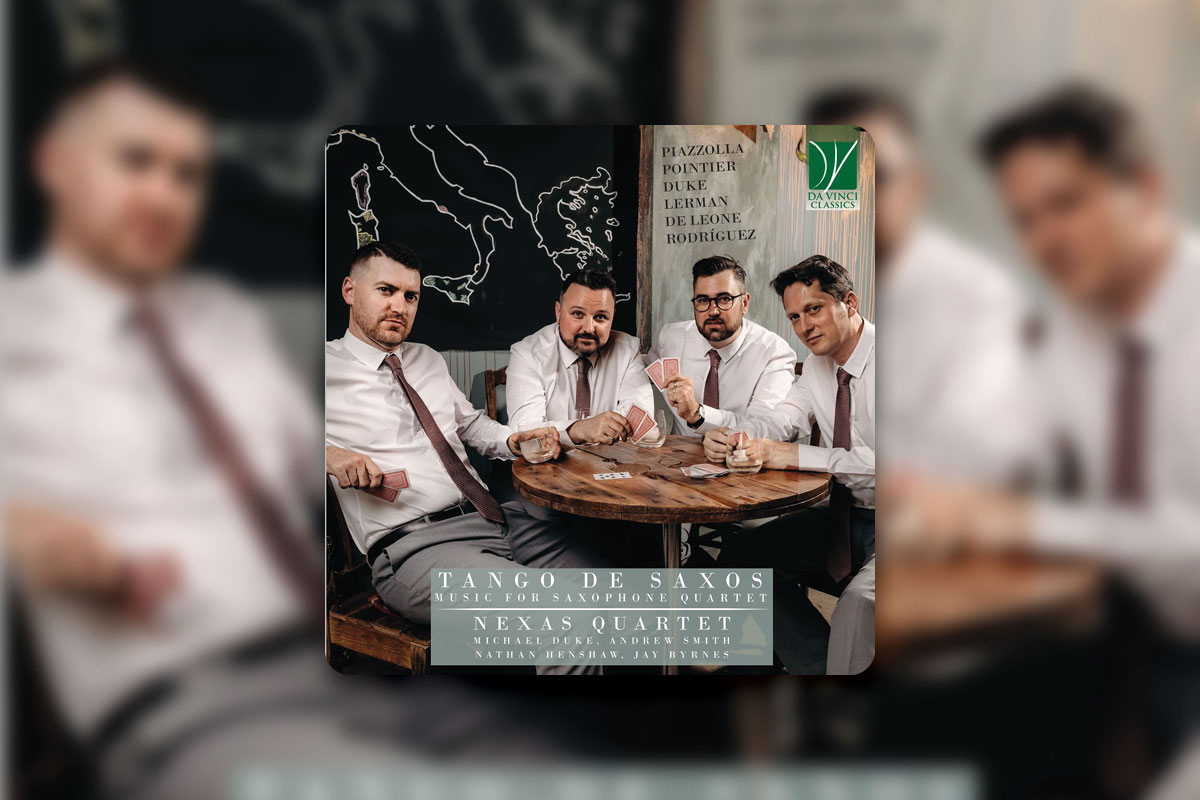 At the height of his popularity in the 80s and 90s, Piazzolla’s compositions were played by pianists, guitarists and string quartets to great advantage. So, if it can work for a string quartet, why not a saxophone one? The smoothness in the ensemble playing is very fine indeed. And with the sonorities and wide variety of tone colours offered by this wind ensemble, it becomes apparent that Piazzolla is not too far removed from the sound world of Weill and others – that is, once the underlying German oom pah pah effects are removed. And of course, Weill himself was familiar with the tango (the Threepenny Opera‘s Tango Ballade and Youkali). Championed by fellow Argentinian, Ginastera, he would study with Boulanger in Paris years after the family had moved to New York, where he luxuriated in jazz and the tangos of Carlos Gardel.

Bringing the quartet together with pianist Daniel Rojas and bandoneon player Stephen Cuttriss as guests, this disc show a wide diversity of tango styles. And even upon listening to the quartet alone, there is no missing either of the guest instruments, so completely at home is the quartet in this seductive repertoire. Nexas brings out not only the lyrical side of the tango with its often aching and earthy melodies, while rhythmically they are completely at home with the anticipatory ‘dragged’ beat that underpins not only these compositions, but the dance itself.

Piazzolla is well represented with his Angel suite, the popular Muerte del Angel and his ingenious appropriation of Vivaldi’s ideas in the four part Las Cuartos Estaciones Porteñas, which has often played in tandem with The Four Seasons – matching one movement for the other, thereby juxtaposing the moods and different weather patterns between Mediterranean and Latin American seasons. It is here that the aforementioned guests are heard to great effect, successfully capturing the mood of the composer’s original instrumentation. The quartet manages to effectively evoke the unique orchestration that Piazzolla’s compositions require with the smoothness of intonation as legato as any string ensemble. This is truly remarkable stuff.

Australians can thank comic genius Barry Humphries for the revival of interest in songs from the interwar Weimar Republic in Germany. As a young man he trawled Melbourne’s used bookshops and found a collection of scores from composers such as Kurt Weill, Franz Schreker, Hanns Eisler and Alexander von Zemlinsky, among others – all of them obscure names (apart from Weill, thanks to Louis Armstrong’s then recent version of Mack The Knife). The discovery sparked a lifelong passion, so much so that he put on a Weimar show with “kamikaze” cabaret star Meow Meow and the Australian Chamber Orchestra a few seasons back. More recently, several classical artists have turned their attention to this period in music history and the composers that either went into exile across the world or died in the Nazi death camps. Now it’s the turn of Australian baritone Peter Coleman-Wright and the excellent Nexas saxophone quartet with Ballads of the Pleasant Life on ABC Classics. There’s a good smattering of Weill, including favourites September Song, Mack the Knife and the ballad that gives the album its title, but the real finds are the political and work songs of Eisler and Zemlinsky and, a little pearl,…

A musically rich and entertaining step back into the Weimar Era.

Current is a fitting name for Nexas Quartet’s new release featuring five leading Australian composers. Elena Kats-Chernin’s repetitive theme opens From Anna Magdalena’s Notebook, over which soars Andrew Smith on alto sax, with Nathan Henshaw nearby on tenor. Each musician exudes a certain clarity in tone but texture is added through growls and the sound of occasional clicky keys. Originally written for string quartet, the saxophone quartet’s warmth in this 2015 (soprano sax) arrangement by Michael Duke enriches this magical work. Nostalgia by Daniel Rojas (arranged by Jay Byrnes, baritone sax) pays a solemn homage to the composer’s memories of childhood naivety. An adrenaline-fuelled Slipstream by Matthew Orlovich features a bicycle bell, illustrating the sensation of cycling by use of wildly ascending and descending passages and swelling dynamics. Matthew Hindson’s Overture from Scenes from Romeo and Juliet is utterly startling, with its jabbing tones and high-impact silences. Romeo sounds like a challenge but Nexas rates highly with outstanding consistency in both individual performance and ensemble balance. This continues with Lachlan Skipworth’s Dark Nebulae, in which the musicians are so restrained that we have to open our ears in order to hear the waves of the player’s droning, unnerving overtones. A…