Andrew McKinnon has brought together the joint talents of operatic bass-baritone, Teddy Tahu-Rhodes, musical theatre star Josh Piterman, and the charismatic Guy Noble, pianist, compere, singer and raconteur, in a comforting evening of populist musical favourites.  It was an eclectic program with works chosen from opera and operetta, classical musicals by Rodgers and Hammerstein and Cole Porter and contemporary works by Lloyd-Webber and others. 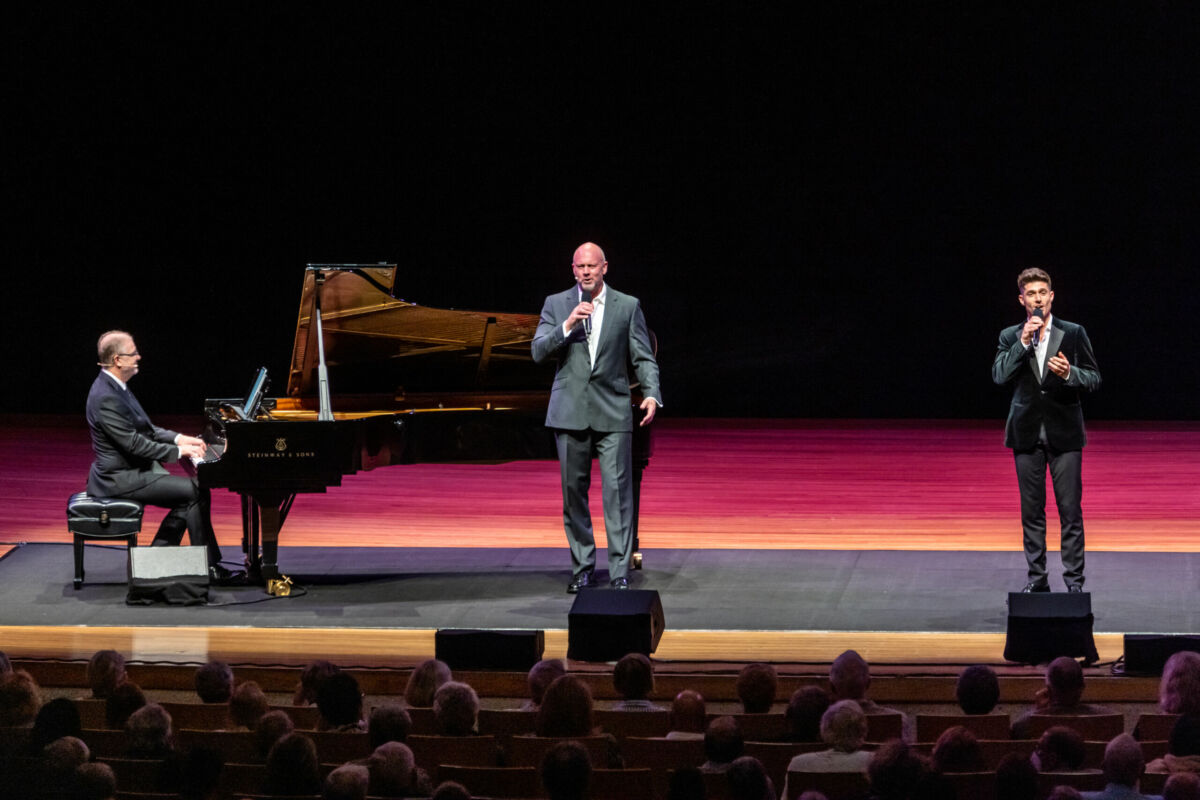 Nearly all the repertoire was in the top ten classical music favourites list which, while clearly attracting the widest possible attendance, might not have met the needs of a more discerning audience who would have preferred to have their musical knowledge both enhanced and stretched with some lesser-known pieces. Well-known repertoire can create its own problems too, begging comparison with other versions or singers in the past, with mixed results.

The concert started with a fun and lively sung introduction by Tahu-Rhodes and Piterman, in which they praise each other continually, while forgetting to mention pianist Guy Noble. The latter stops proceedings to have a chat with them, at which point they remember to thank him too. It was light-hearted and got the evening off to a good start.

Tahu-Rhodes commenced with a rousing rendition of Largo al factotum, Figaro’s aria from Rossini’s The Barber of Seville. His is a beautiful, rich, dark bass-baritone, rock-solid through all the range and he presented the aria with great panache and impeccable timing. It seemed odd that he used a microphone for this aria, as he clearly did not need it, but that was the choice of the evening overall. This was also the only opera aria he sang, which was disappointing as he has such a huge repertoire from which to choose, but the concert was clearly skewed towards musical theatre. His other solo numbers included a splendid, well thought-through If I were a Rich Man from Fiddler on the Roof and a lively I am the Pirate King from Pirates of Penzance. He also presented a poignant Some Enchanted Evening from South Pacific, a role he sang to great acclaim in 2013, as well as Javert’s wonderful aria Stars from Les Misérables, which he delivered extremely well.

Musical theatre and cross-over star Josh Piterman recently completed a season as the Phantom in London’s West-End. Technically accomplished, he has a lovely light-baritone/tenor voice which works well for many leading roles in this genre while he imbues everything he sings with passion and commitment. He sang The Music of the Night with great style, expression and a depth of feeling. Unfortunately, his diction had a mannered British articulation which was disconcerting, and it lacked the spine-tingling effect that this song usually elicits. 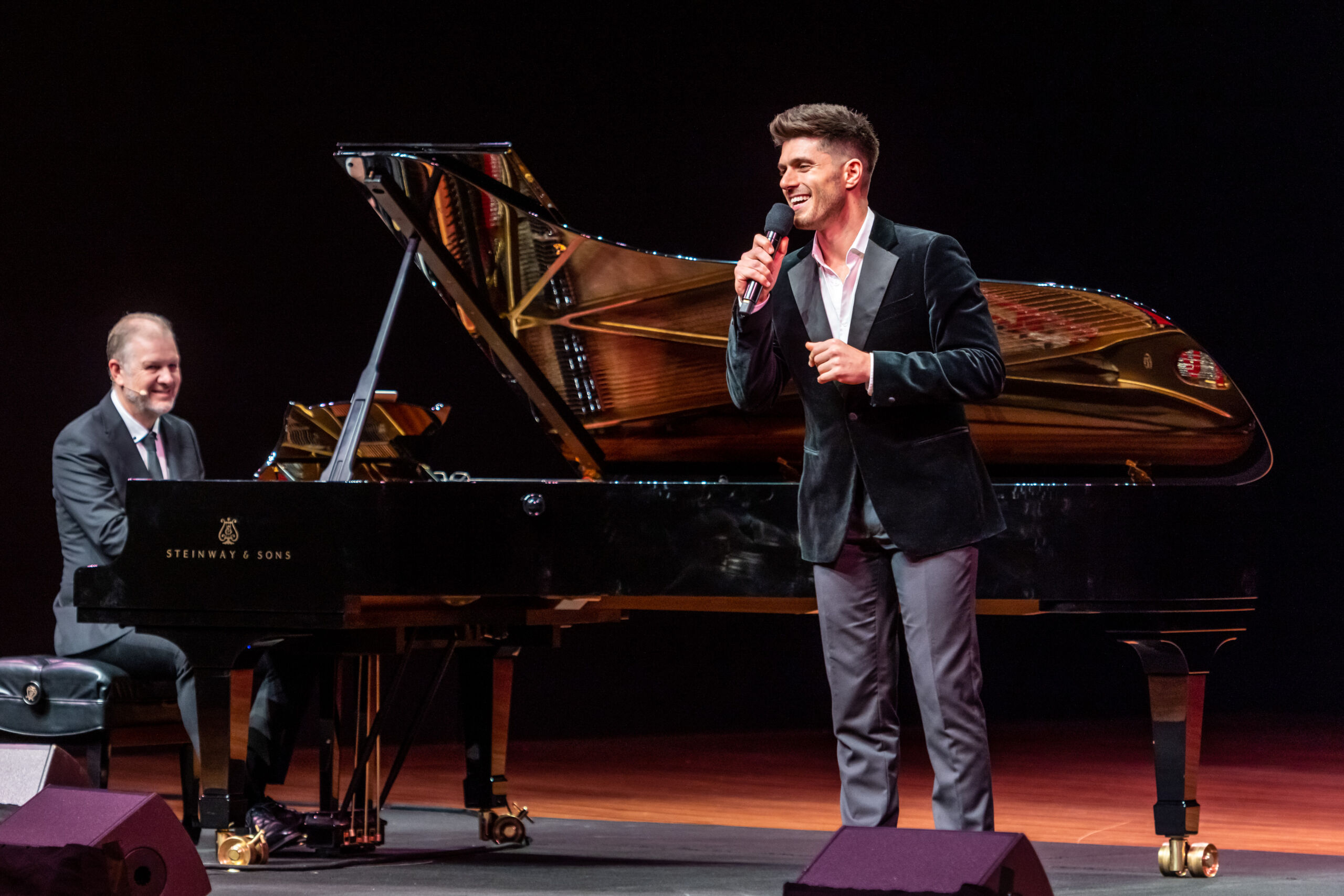 Clearly, Piterman is also a romantic at heart as he sang a favourite song, Morricone’s Se, the love theme from the film Cinema Paradiso, a particularly sugary confection of little merit musically. His love of the older-style musicals was also apparent, and he gave us a marvellous So In Love by Cole Porter from Kiss Me, Kate. Despite being a duet, he told the story well with great phrasing. Less successful was Loesser’s Luck Be A Lady from Guys and Dolls, made famous by Frank Sinatra. He sung the notes well but it was just too nice, lacking the swagger and the pointed vitriol of lines like ‘let’s keep the party polite’ and ‘I’m the guy that you came in with.’ Bravely, he also sang Puccini’s Nessun Dorma from Turandot as an encore and did a very good job, even if it was sung in a register lower than normal. But it is always a crowd pleaser and he gave it his all. Having heard him sing an amazingly strong Tony in West Side Story some years ago, one wished that he might have chosen some other meatier repertoire, including by the recently-deceased Stephen Sondheim, whose work was sadly and surprisingly missing from the program.

The duets that they sang together were less successful, as their separate styles and voice qualities did not always blend well. The best of these was You’ll Never Walk Alone from Carousel, which was heart-warming and powerful. Neither the glorious Lilly’s Eyes from The Secret Garden or the consistently rated number one operatic hit Au fond du temple saint from Bizet’s The Pearl Fishers, worked that well. In both, Tahu-Rhodes seemed to have to take his natural sound level down a notch and perhaps these roles were unsuitable for his voice. It left the songs unbalanced and it was difficult not to make comparisons. 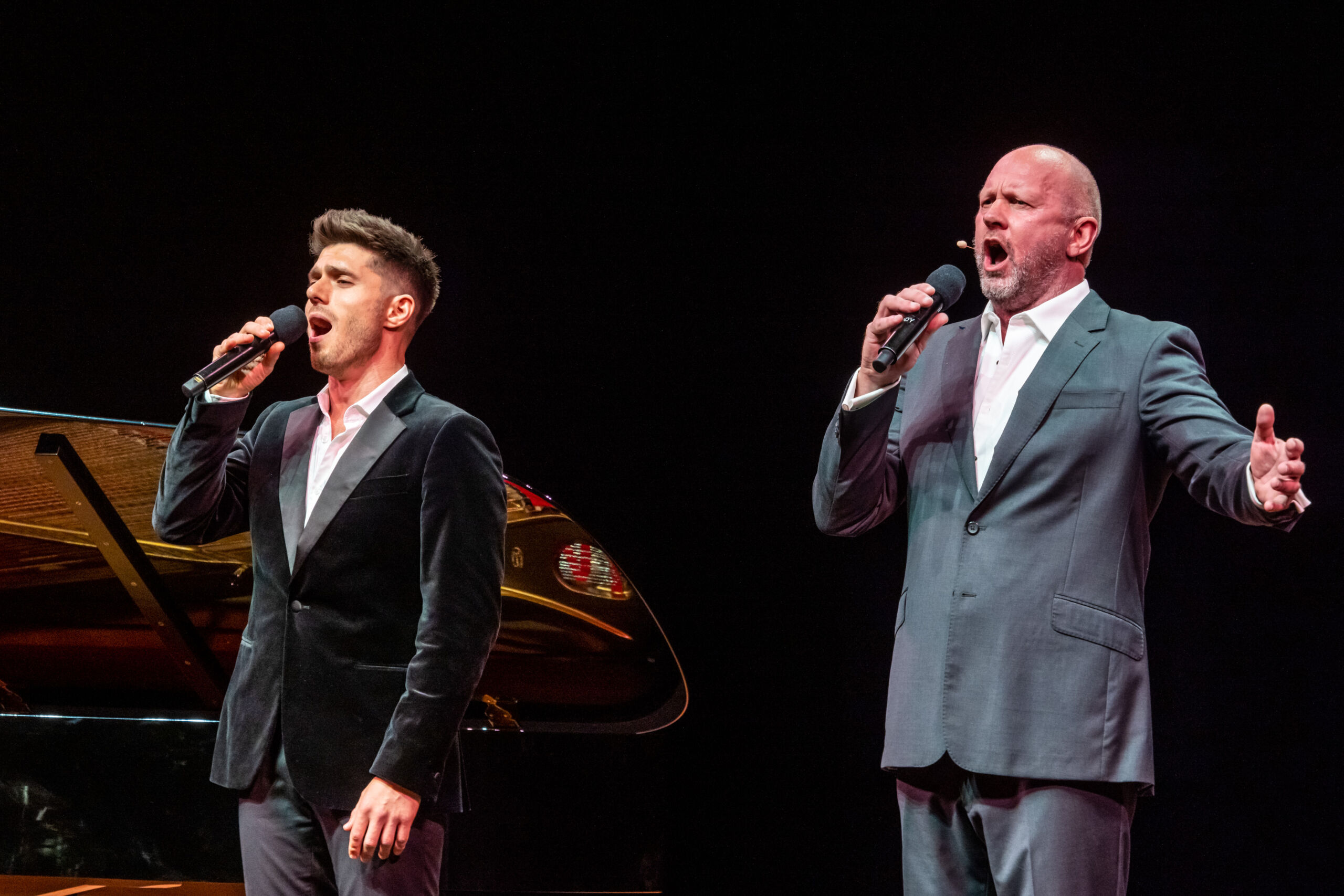 Guy Noble accompanied both artists on piano wonderfully well throughout the evening and had a chance to strut his stuff with a topical rendition of When I Was A Lad from HMS Pinafore, touching on themes such as the election, Hollywood and the British Royal family. This was a light-hearted and very well-received segment of the program, bringing much laughter to the auditorium. It was a pity that he did not have more to do along these lines, as one felt he could have added levity and he might also have been utilised as an MC linking the separate songs and segments. Both Tahu-Rhodes and Piterman introduced songs and told some stories, with Piterman extremely good at these. Nevertheless, Noble was an under-utilised resource.

Production values were limited. The piano was the only thing on stage, with no props, no chairs or stools or anything to assist with setting the scenes. The sound quality that opened the show reverberated strongly but then settled down. Structurally, the songs were polished (though the duets might have been rethought) but the links were ragged at times and certainly seemed under-rehearsed. No doubt this will settle down in the forthcoming tour.

This concert program will tour to many regional centres including the Gold Coast, Toowoomba, Bundaberg, Newcastle, Port Maquarie, Bendigo and Melbourne during May and, with three very talented performers, it will certainly be greeted enthusiastically by many who have been missing live classical music performances.

This concert will tour to the Gold Coast, Toowoomba, Newcastle, Port Macquarie, Melbourne, Bundaberg and Bendio throughout May 2022. More information here.