When choreographer Frances Rings unveiled Terrain in 2012, it was her first full-length work for Bangarra Dance Theatre. Hailed by audiences and critics alike, it won two Helpmann Awards before travelling around the country in 2016–17. Although Rings had previously created shorter pieces for Bangarra, the premiere of Terrain was very much a seminal moment. Ten years on, the work has lost none of its freshness. 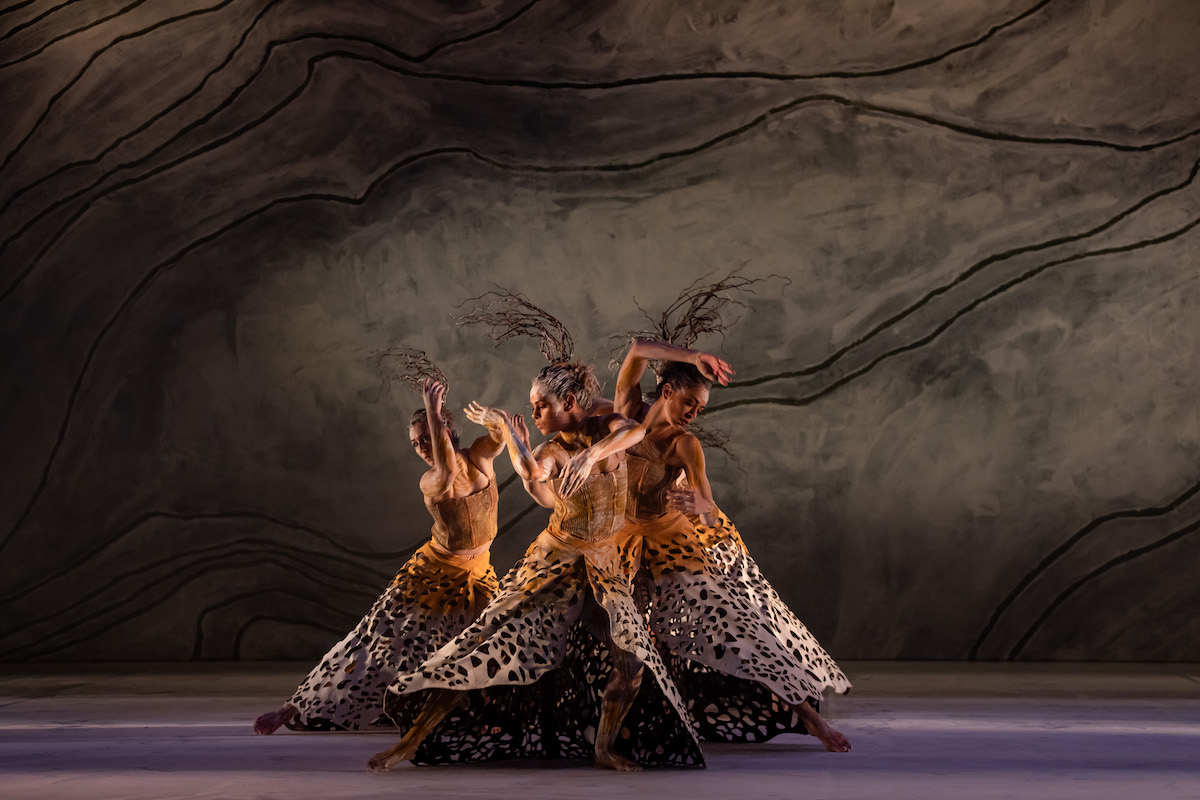 Lighting designer Karen Norris welcomes us with a blinding flash that exposes a white box stage – the long-held signifier of innovation and transformation in the theatre. It doubles as the gleaming salt pan of Kati Thanda-Lake Eyre. This setting frames a series of backcloths by set designer Jacob Nash. They fly in and out with each of the nine vignettes that constitute Terrain, depicting various aspects of Country, culture and practice. One of these is titled Scar and deals with the environmental damage caused by human activity. It plays out against one of Nash’s more striking paintings that might represent the bird’s-eye view of an open-cut coal mine. Others depict the deluge and salt crusts later left behind in drought.

The cracked earth motif carries over onto the leg coverings of the men, as well as the perforated skirts worn by the woman as trees in a scene titled Spinifex. Jennifer Irwin’s sculptural costumes evoke the textures of the environment in all its wondrous diversity. They also demonstrate Irwin’s innate understanding of how different materials and fabric interact with a dancer’s body to maximise and enhance movement. In the final section of the work, the dancers are adorned by the pinks, greens and blues of the flood waters that bring Kati Thanda to life, again beautifully lit by Norris in soft hues that envelope the entire theatre in their warm glow.

The late David Page lavished Terrain with an evocative score that contrasts intoxicating electronic beats with subtler acoustic sounds. When the orchestration allows a cello to dominate, one almost wishes we could briefly forego the amplification, so that the nuanced choreography could be accompanied by a live instrument.

Terrain is the magnificent sum of its parts – a definitive Gesamtkunstwerk that can never be bettered. It is an ensemble piece in which all the dancers uniformly excel and beam with pride. It is easy to see why. Not only is Terrain an extraordinary milestone in the history of dance, but it is also imbued with a transformative quality that can help in this country’s ongoing journey of reconciliation.

Given Rings’ existing body of work, and the promise of what is yet to come under her Artistic Directorship of Bangarra, she has more than earned a place in the pantheon of game-changers that includes Martha Graham, Agnes de Mille, Katherine Dunham, Alvin Ailey, Pina Bausch and Germaine Acogny. Indeed, there are moments in Terrain, most notably during the Scar, Landform and Deluge vignettes, that recall Bausch’s own Rite of Spring – especially in its most recent restaging by an African ensemble rehearsed at Acogny’s École des Sables in Senegal. Not that Rings’ Terrain is in any way derivative, but rather because of the energy generated by its dancers. There is a common heartbeat that reverberates in both works and immediately connects those on stage and in the audience to the earth.

That connection is best described by First Nations people as “Kinship” – that emotional bond between all species and natural phenomena. It lies at the heart of everything Bangarra does. It is clearly seen (and felt) in Rings’ work, including Sheoak and last year’s SandSong, which she co-created with Stephen Page and is now touring alongside Terrain. The pairing of the two in this year’s repertoire makes sense. There are commonalities across both – the use of body painting; the notion of water as gold; a choreographic language that transcends millennia by combining Aboriginal dance with both classical and modern forms; and the intrinsic link to earth and Country. However, while SandSong often felt like a work begging to be set free from the confines of a western theatre and performed on Country, Terrain seems to embrace the function of a cultural interface that unites performers and audiences at the intersection of knowledge, regardless of location. 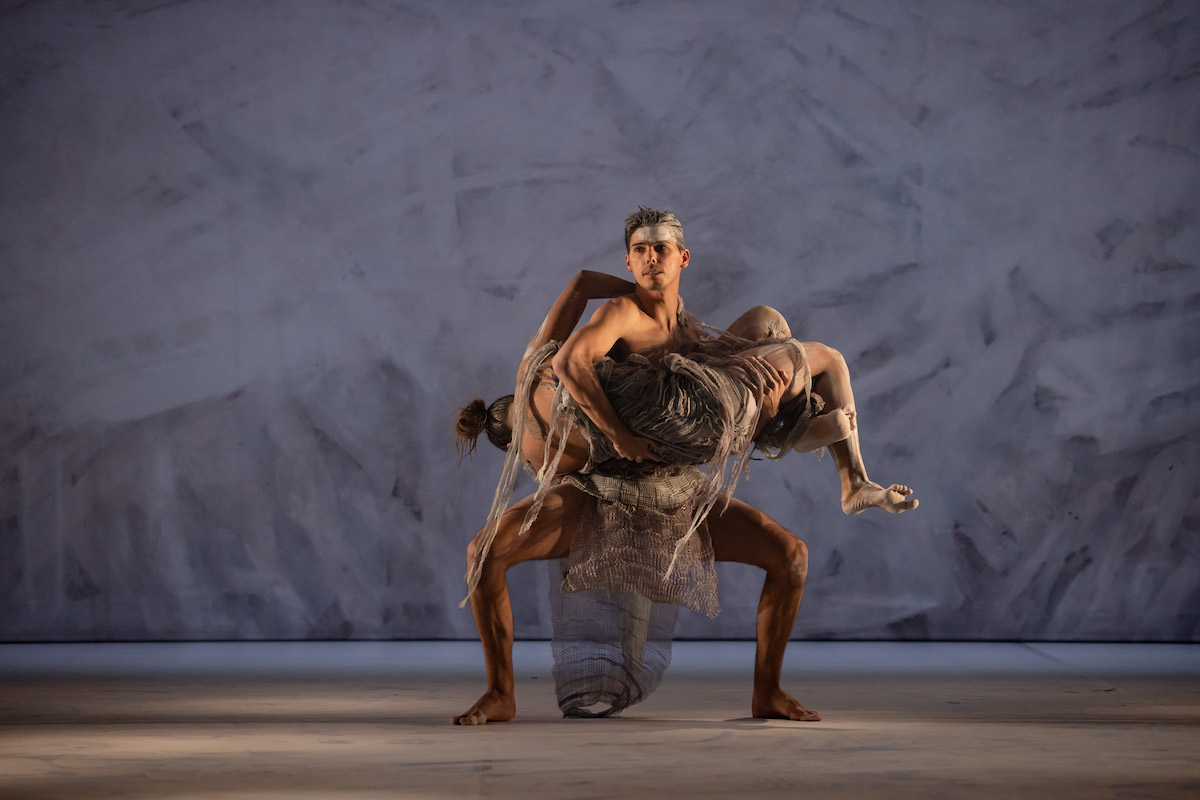 Perhaps this is due to the use of the white box as a blank slate on which mutual understanding can be built. Certainly, nothing in Terrain is ever more than poetic and therein lies its genius. Themes of land rights and environmental damage are addressed, but the effect is never jarring, and the audience is allowed to maintain an almost meditative state throughout. Other works in Bangarra’s repertoire, SandSong included, encourage Brechtian moments of much needed self-reflection. However, Terrain seems to be inviting the audience on an immersive journey that leads to greater understanding. This is engagement at its finest and perhaps most seductive. It is also effective.

When Rings first created Terrain, it called on us all to heed Indigenous knowledge of how to care for Country. In 2012, it was a plaintive cry that often fell on deaf ears. Today, Terrain echoes a groundswell of newfound interest – most notably in cultural fire management. One would be drawing a long bow to suggest that Rings brought about this shift in public opinion and policy, but her work no doubt struck a chord in everyone who saw it and, at the very least, contributed to a new and more open mindset. Indeed, it continues to do so.

All art reflects the zeitgeist, but masterpieces transcend trends and epochs. They are history-making and resonate for generations to come, defining not only the future of their discipline but the world around them. Terrain is one such work and its future as a timeless blueprint for other choreographers is assured. Already part of the canon, it is even included as a compulsory component in the NSW Higher School Certificate Dance curriculum. Would that it were on a national level.

Across the Botanical Gardens from the Sydney Opera House, the Art Gallery of New South Wales is currently presenting the first major monographic exhibition of First Nations artist Daniel Boyd. Titled Treasure Island, it exposes extractive colonialist practice that still plunders the Australian landscape and imposes its own cartographic rules on Country previously mapped by waterways, mountain ranges, bush and desert. Considering set designer Jacob Nash’s topographical representation of Country on his backcloths and Rings’ treatment of custodianship and care for land, one sees that Terrain and Treasure Island complement each other in perfect harmony. It would be valuable for an audience to take in Boyd’s exhibition before making its way along the shoreline of Wahganmuggalee/Farm Cove to Tubowgule for a performance of Rings’ masterpiece. This writer did, and the combined effect was revelatory.

A program note tells us that the Arabunna people – the traditional owners of Kati Thanda-Lake Eyre – measure time according to the length of shadows, the movement of clouds, the levels of salt crust, and life-bringing floods. Terrain may be little over an hour in length, but generations pass before one’s eyes. As we emerged from our near hypnotised state on opening night, we were left begging for more. Non-Indigenous Australians have much to learn about this great land. To be taught through such beauty is a privilege nobody has the right to refuse.