The 365-kilometre route from Mount Kosciuszko (Targangal) that runs down to Twofold Bay (Turemulerrer) near Eden in NSW is called The Bundian Way. It’s an ancient pathway for Aboriginal people, known as the Whale Dreaming Trail.

This 75-minute performance titled The Bundian Way included images from the track and music that captured the characteristics of the nature and culture of south-eastern Australia. John Blay, the author of On Track: Searching out the Bundian Way, read from his book that depicts the life and presence of the track. 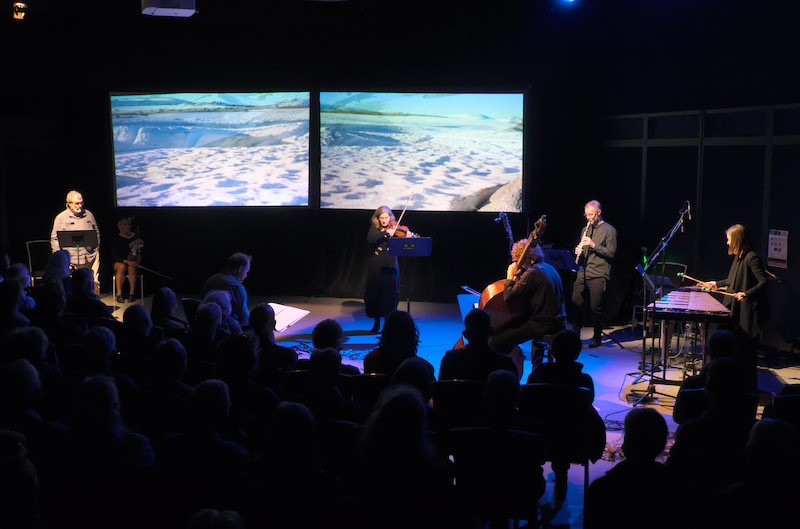 The composers and works featured in The Bundian Way were Brenda Gifford’s Walimbaya (Return), new works by Eric Avery and Kate Neal and Damian Barbeler’s Scenes from the Bundian Way.

Combined with Blay’s narration, we saw and heard a visual and aural landscape that began by taking the audience into the cold high country. As a soundtrack to the moving images, the players set up a chilling soundscape that felt as icy as the images. As we journeyed over the track, the scenery and the music evolved. Delicate blossoms and bright yellow flowers sprung up, as did the sound of them through music.

Throughout this journey, the soft words of Blay related what he has seen, felt, and heard on his walk over this mysterious and changing land. Bogon moths, waterfalls, frogs, and birds accompanied the delicate soundscape. Stepping through a forest, two violins sang of the trees and the green bushy undergrowth. Surrounded by this visual and aural splendour, we felt as if we were there.

The journey continued. The story moved through the track as a distorted violin, overdriven by volume and reverb created a scary place. Other instruments joined in, distorted and natural, and the atmosphere grew dense like an enclosing forest.

Then the music and scenery brought us out into the open country land followed by fences, a farm and the sounds of cattle – a startling image after all that deep green dark forest. The music responded to the landscape, offering a pastoral feel.

There were periods of music without visuals. Perhaps the inclusion of more images of this wondrous part of Australia might have helped create a more continuous journey.

Coming down onto Whale Beach, the blue watery expanse and the sounds of wind, with waves crashing, brought about a mysterious change in the music. It was a searching sound that found something new in this inlet between Moutrys Point and Brierly Point on the Towamba River near Bega Valley.

The double bass had an extended part over images of rocks, discarded oyster shells from thousands of years ago, and the highly coloured earth. Its sound was processed somehow, making it echo, loop and deepen. Through the rugged coastal ranges, we journeyed with Blay as he hummed and sang a tune. The violin accompanied him, echoing his song. This was the most effective part of all the visual and aural collaborations.

Finally, this journey was over. It seemed to end almost before the final destination. But it made me want to seek out The Bundian Way and take the journey to experience its tapestry of sounds and visual delights.