Much mainstage 20th-century theatre was a mercurial blend of three principal forms: melodrama, expressionism, and realism or naturalism. The Glass Menagerie (1944) was classified by author Tennessee Williams as a “memory play”, and it includes all three styles. Black Swan State Theatre Company of WA’s new production, directed by Clare Watson, reworks these elements to offer a production that is elegant and dreamy, like looking through gauze, even if the balance is not altogether smooth. 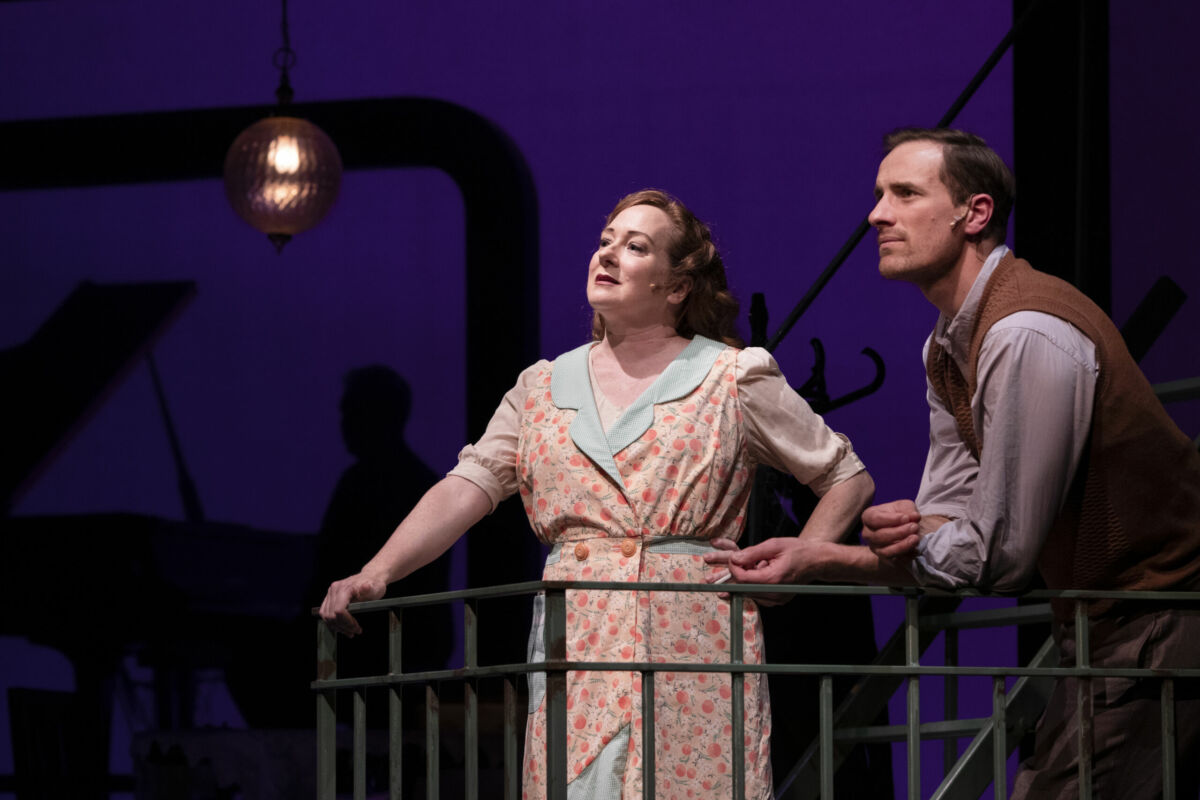 The play is set in a worn St Louis tenement, which son Tom (played by Joel Jackson) shares with domineering mother Amanda (Mandy McElhinney) and his hopelessly shy, neurotic and lame sister Laura (Acacia Daken). Early on, we find that Laura has failed at her typing course and now lives in dreams and through contemplation of her collection of decorative glass animals. Amanda is a fallen Southern belle abandoned by her no-good husband and does not work, so it is up to Tom to support the trio through his tedious employment in a shoe warehouse.

Amanda, projecting her experiences of youth in the South onto her family, insists that Tom finds a potential “gentleman caller” from the warehouse to propose to Laura and bring them out of poverty and inaction. Things do not go to plan, and although the caller Jim (Jake Fryer-Hornsby) seems to briefly fall for Laura, he is already engaged.

The Glass Menagerie is on one level a study in poverty and modern urban life in America, where the dreams of Laura (her menagerie) and Tom (of being a poet) are inconsistent with the social roles thrust upon them. This social-realist aspect is however undercut by Tom addressing the audience directly at several times and telling us that what we are seeing is a projection of his memory (and that of Williams too), giving the piece its slightly dreamy, expressionistic feel, close to Strindberg’s Ghost Sonata (1907) or Dream Play (1902).

The Glass Menagerie does not have the hothouse environment of Williams’ Streetcar Named Desire (1947) or Cat on a Hot Tin Roof (1955) – at least not as directed here by Clare Watson – but the characters are prone to flamboyant bursts of emotive speech about their thwarted longings. This provides the melodrama. Watson literally emphasises this by co-opting composer-pianist Tom O’Halloran to perform live behind the action: a reminder that melo-drama originally meant drama performed to melodious music. O’Halloran’s Gershwin-esque refined jazz classicism includes dashes of atonal upset (O’Halloran also strums the strings inside the piano like a harp) and even quotes Blondie’s song Heart of Glass. 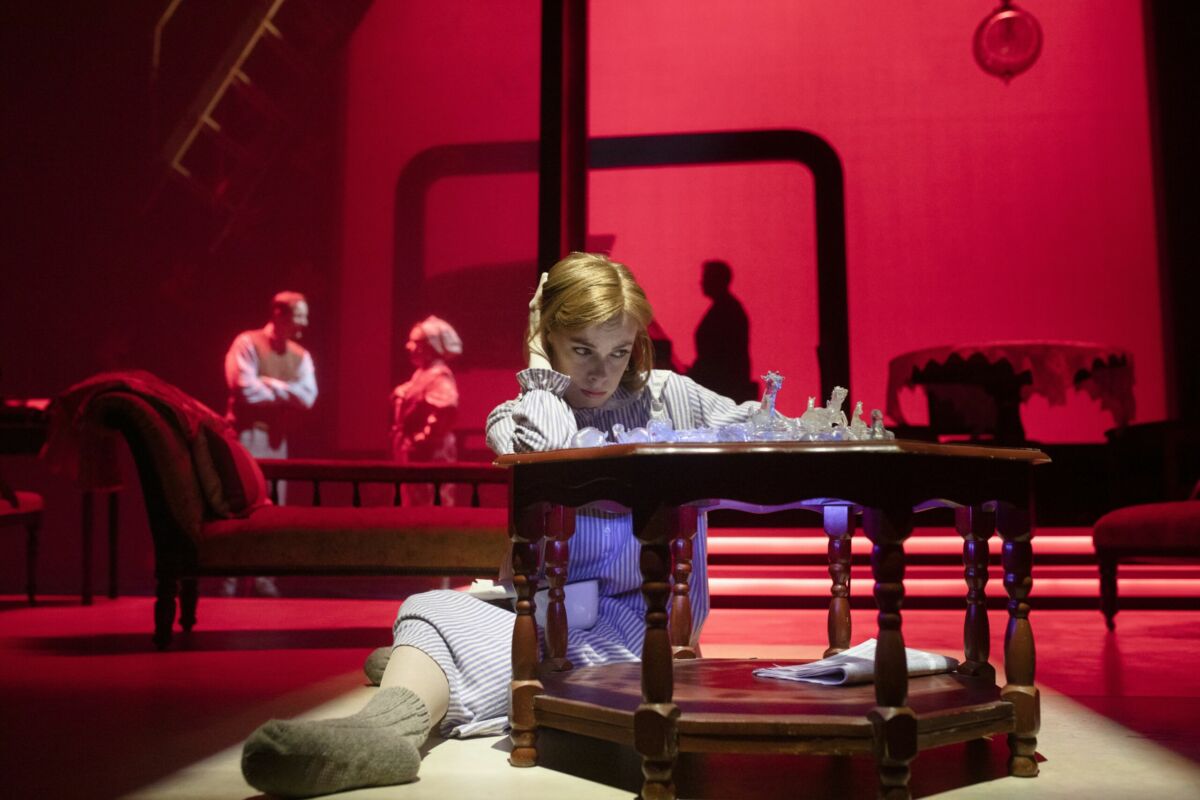 Similar to the original staging, designer Fiona Bruce uses a cut-away set with realistic props and furniture, but Bruce’s version is sparer and, crucially, does not sit against a backdrop of grubby bricks as in 1947. Instead, it is is elegantly framed by arches piercing three translucent screens which recede upstage. Although most of the action occurs on the forestage, this sense of a world indistinctly vanishing into space causes much of the performance to float in a slightly unreal realm.

This sense of dreamy suspension is enhanced by projections by Michael Carmody. Beamed above and to the left onto the forward arch, the projections offer a set of periodically recurring images. They include blue roses (Laura’s childhood nickname), which then blossom (as in Strindberg’s Dream Play, in which the blooming of a projected flower is the principal action of one scene); patterns of light refracted through the glass of the decorative animals; a photograph of the absent father; and the naked torso of an anonymous man (representing an ideal towards which the family in various ways aspire or desire). Key lines from the play are also projected, acting like the intertitles of Woody Allen’s films.

These expressionistic additions are the most engaging part of the production, breaking up an otherwise wordy play in which characters – especially the conceited Jim – pontificate on deeper things or recount elaborate memories. Watson’s deployment of these expressionist flourishes is however slightly bitsy, with the verbal interactions remaining the focus.

While the play starts with O’Halloran’s jazzy accents playing throughout, the music soon becomes an interjection between sections with little to no music. In the end, the score acts as it does in mainstream cinema, fading into the background. The same is true of the projections, which are not only limited in repertoire and used sparingly, but they are also placed literally in the margins of the action, to the left and above. 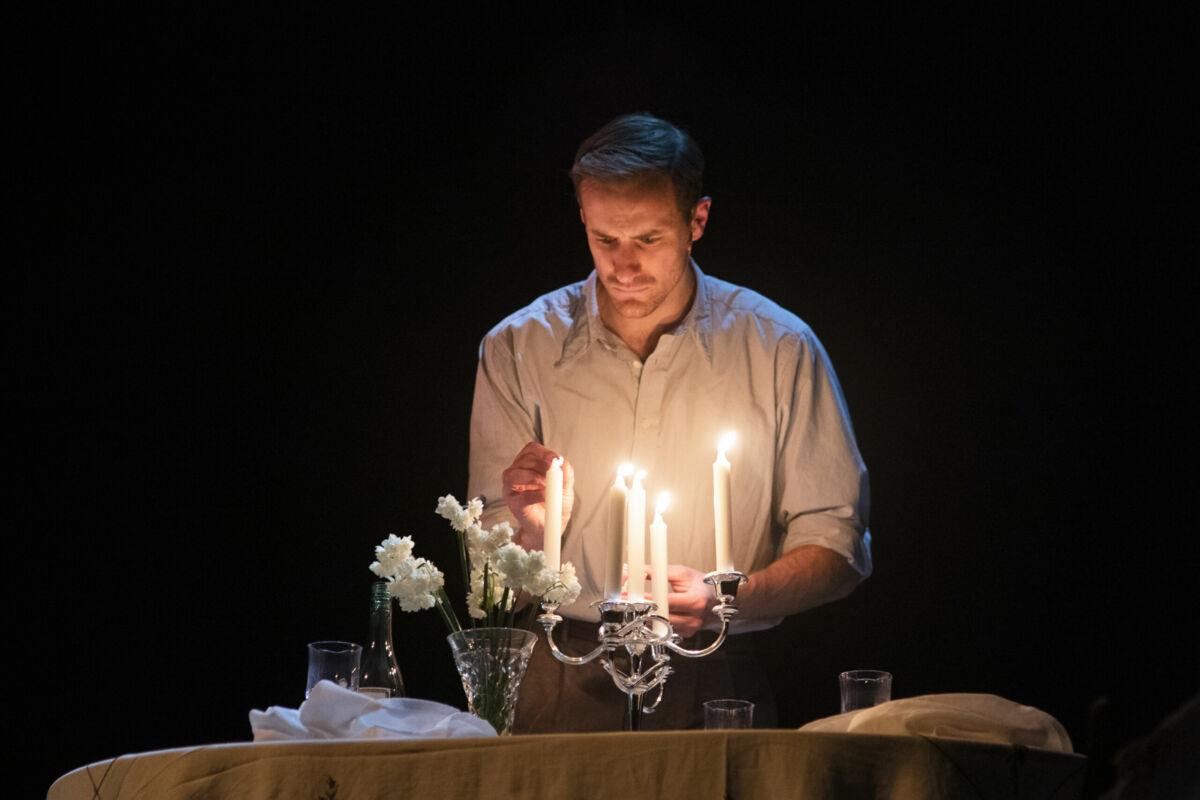 The acting is moreover relatively restrained. Jackson’s performance is slightly twitchy and fidgety, but aside from one early scene, in which he bawls out his mother, he otherwise comes across as very level, if slightly harried. McElhinney has more fun as the Southern belle reliving her youth by flirting with Laura’s caller. In short, the scenes, largely delivered from seated positions or static standing poses, tend to be low in energy for a melodrama, yet also insufficiently fanciful or fantastic to entirely function as expressionism.

Though Watson presumably does not agree, it is hard not to conclude that this play has aged badly. There is one massive elephant in the room, namely Tom’s and Williams’ homosexuality. Tom repeatedly tells his family that he is “going to the movies,” and while he does relate the program of a mixed film and variety show performance on coming home one night, it is clear he is not going to the movies. But other than an oblique suggestion that Tom may have had designs on Jim himself, not a single word about this is uttered on stage. For mainstream 1940s America, it was an activity which could not, allegedly, be directly discussed in public – rather undermining Williams’ claims to social critique. Unfortunately, however, the Williams’ estate does allow script changes, and so it remains.

For those who are enamoured of Williams’ sometimes verbose constructions and sense of tragedy, Black Swan offers a stylish, beautiful looking and assured production. For myself, as something of a Williams sceptic, I imagined a version that might consist of little other than the play of light on the glass animals as in Stan Brakhage’s landmark film The Text of Light (1974), accompanied by O’Halloran’s gently syncopated score.

Black Swan State Theatre Company of WA’s production of The Glass Menagerie plays at His Majesty’s Theatre, Perth, until 21 August.

With The Glass Menagerie opening in Perth next week, actor Mandy McElhinney and director Clare Watson talk about Tennessee Williams' legacy and revisiting the oft-maligned role of Amanda Wingfield.

The fourth annual Audible Edge festival presents some of the most interesting sounds to reach Perth.