After a seemingly endless hibernation period, clocking in at around 100 days, the Primrose Potter Salon of the Melbourne Recital Centre could finally open its doors to the public to display the fruits of the 2021 Merlyn Myer Music Commission. This year’s recipient, composer/performer Nat Bartsch was joined by Melbourne’s own Inventi Ensemble to present a poignant portrait of chamber works, including the premiere of the title work The Glasshouse; a suite composed with help from the commission. The work refers to six photographs by 19th century photographer Julia Cameron, each image influencing a movement of the suite which were projected alongside images of the composer and ensemble taken by regional Victorian photographer Suzie Blake. 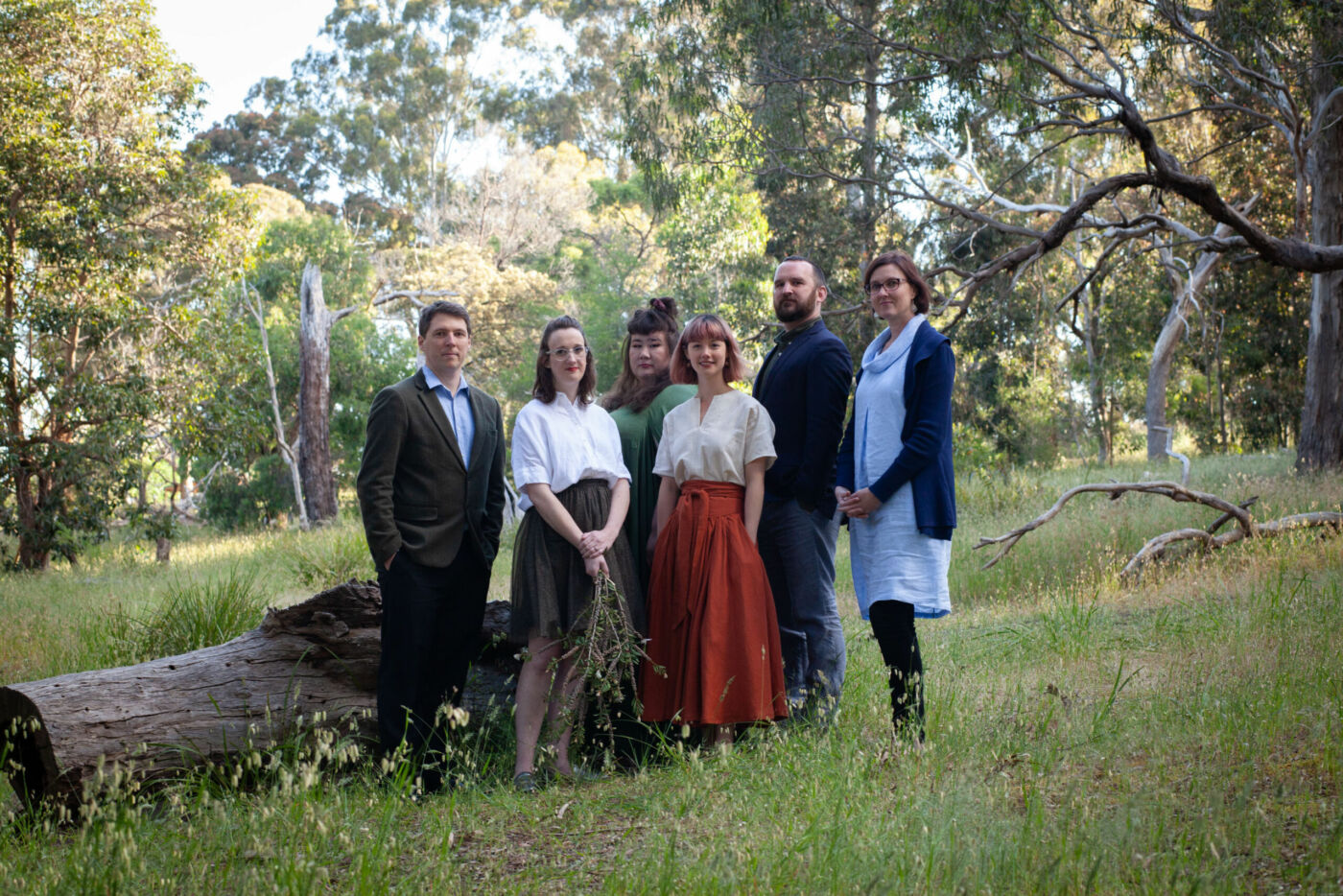 Cozy, comforting and candid come to mind when one thinks of Nat Bartsch. Her music, tamed in the harmonic air of jazz and fluid filigrees of minimalism, is unabashedly intimate. Each phrase echoes persistent patterns of progression, with tenderness and warmth abundant in the textures of the works. Nat’s background in jazz piano certainly pollinates her classical language, filling the music with fragrant moments of dissonance paired with melancholic marination that at times can seem to meander, but lures us to unexpected territory. Such unpredictability balances with the simplicity of the works, and by no means does this make the program heard any less virtuosic.

Bartsch opened the evening alongside violist Katie Yap, performing a short duo arrangement of Lights and Shadows. This scaled back edition of the work – originally featured on her lullaby album Forever, And No Time at All – set up the calmness of the program, and though at times it felt a little dulled at the height of its musical climax, one couldn’t help envisaging the sun rising on a dewy morning; as if capturing such a scene with a compositional camera. Following this, the piano trio Homecoming withheld itself again inside a fragile dialogue between strings and piano, this time revealing a virtuosity in the interactions between violinist Kyla Matsuura-Miller and cellist Paul Zabrowarny who performed the lusher phrases with sublime attention to the colouristic contrasts woven into the work. A fascinating first half that provided an insight into some of Bartsch’s earlier classical-crossover work.

The entire collective of Inventi musicians, including now co-directors Melissa Doecke on flute and Ben Opie on oboe, joined Nat to perform The Glasshouse. Opening with tender broken chords on the piano, the ensemble slowly reveals itself in catching resonances. The unfurling of gestures and harmonic evolution throughout each of the movements were captivating to say the least, and the ensemble played with a founded poise that occasionally waned in the first half – we’ll put it down to post-lockdown nerves. Now with full forces onstage, one couldn’t help but notice the duller acoustic of the space, with very little – if any – amplification to any positive effect. This also effected the reception of the electronics, which were at times too quiet to even consider part of the ensemble texture; perhaps this was intentional. It’d be great to hear this work performed in a space with a larger acoustic to truly capture the gradient of potential resonances! In a similar vein to the other parts of the programme, a slightly beige dynamic palette was cast across the work as a whole, with not a lot of obvious climax throughout. Though the understated quality of the work and performance overall was well received, it seemed that the effect was nullified at times. 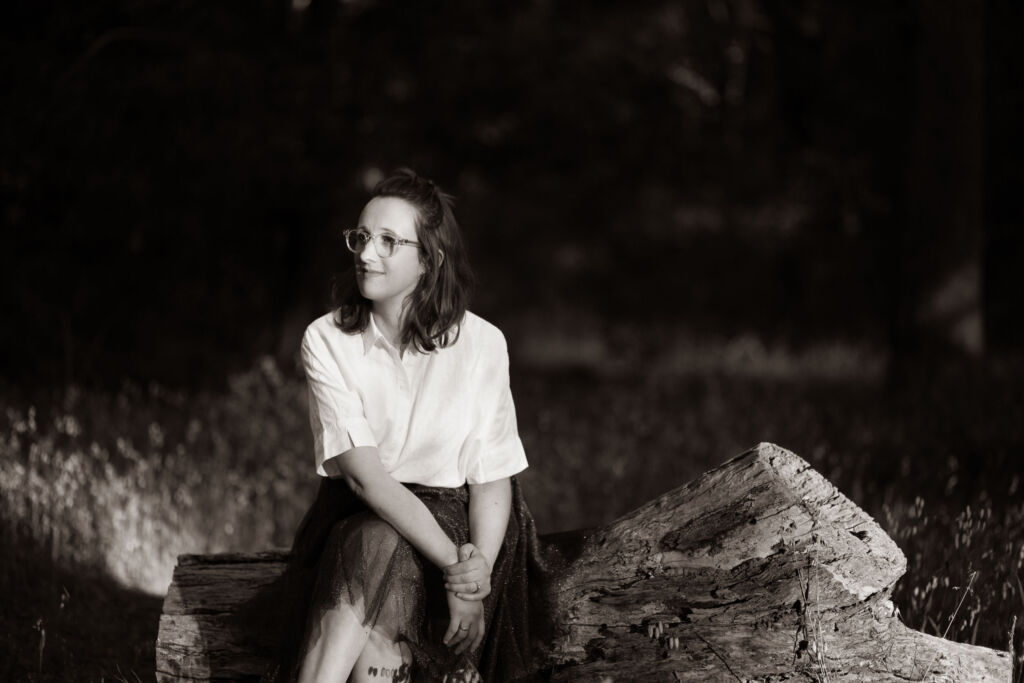 Nat Bartsch, whose suite The Glasshouse is the 2021 Merlyn Myer Commission, and is inspired by portraits taken by photographer Julia Margaret Cameron (1815-1879). Image © Suzie Blake.

The final work of the program, Into the Light – another arrangement – proceeded in a similar vein to The Glasshouse, this time with more soloistic moments for each of the wind players, who were used sparingly in the previous work. Originally written for Plexus, an insistent ostinato is set up that accumulates around the more improvisatory landscape, especially present in Bartsch on the piano. This was the strongest work for the evening. A work not dissimilar to most on the program, it tied up the evening nicely. The encore from Nat, a snippet from her well-deserved ARIA-nominated album Hope titled The End of the Decade, provided space for her to bridge the two worlds which she works across so well. A lovely way to close the event.

A subtle submergence in a range of lush lullabies and flowing lattices of chamber writing, a big congratulations all round. I look forward to the return of live music in the next while, and to the continued work of all artists involved!

Inventi Ensemble steps up to break the silence of a COVID lockdown.

Violist Katie Yap introduces us to the period instrument ensemble, who describe themselves as ‘musical explorers’.

Named for an Aboriginal word meaning pipe or flute, Ulpirra Sonatines places Ross Edwards and Mark Isaacs – who joins flautist Melissa Doecke on this disc – alongside Poulenc and Dutilleux. The disc opens with the lush first movement of Isaacs’ Sonatine, Doecke soaring over Isaacs’ undulating piano. The recording catches the complex edge of Doecke’s sound as she produces ethereal harmonics and earthy flutter-tonguing. Isaacs’ The River for alto flute and piano revels in the velvet sound of the lower instrument, while providing plenty of opportunity for Doecke to sweep up through the range with a light, flitting agility. The colour and virtuosity of Edwards’ Nura has no doubt contributed to its popularity in the flute repertoire. Wild Bird Morning channels Messiaen while Ocean Idyll is eerily tranquil. In this performance the normally fiery Earth Dance is given a carefully paced, detailed treatment. Doecke’s clean sound winds meditatively above gently flowing water in Edwards’ Water Spirit Song, originally a work for cello, while Ulpirra dances playfully. After this, it is jolting to be thrust into 20th-century neo-classicism with Poulenc’s oft-performed Sonata. Doecke’s tone is honeyed, however, as she delves into the low register and glistens on the high notes…