Originally commissioned by Melbourne Theatre Company for its 2020 season, The Heartbreak Choir is the late Aidan Fennessy’s final play. It’s a miracle of optimism and humour from a man who knew he was dying of cancer when he wrote it. It’s also refreshingly direct storytelling, without laboured agendas or obscure meanings.

Indeed there’s a wonderful verisimilitude about this production directed by Peter Houghton, who maintains a naturalistic sense of drama and space throughout its 130 minutes. The set is a mid-century community hall in country Victoria, with honour rolls, a tiny temperamental old wall heater and a portrait of the Queen from the early days of her reign. Realistic incidental sounds include the heater’s ticking, native birds and cicadas, and the occasional car pulling up outside, headlights gliding across the hall’s upper windows. 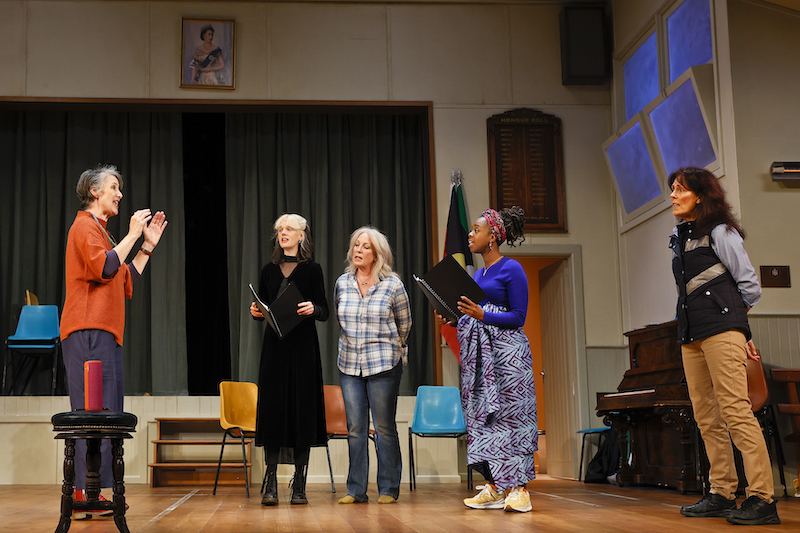 A handful of locals gather to sing. They’re the kind of mixed bunch you might find in a country town moving with the times. There’s matter-of-fact Totty, whose family has prospered here for generations, extrovert farmer Mack and her introvert teenage daughter Savannah. There’s also Barbara, a well-spoken leftie psychologist who moved here ten years ago, and Aseni, a migrant Zimbabwean doctor who works at the deli. Eventually we also meet reticent policeman Peter and his son Beau, who hangs around almost wordlessly while the others go about their business.

Different personalities shine through as the choir buddies share news, exchange banter and differences of opinion, and reveal some heartbreak between occasional songs. They have recently split from the choir that sings in the Catholic church hall because of an ethical difference of opinion, and also quietly mourn the passing of former member Caro, who was Peter’s wife. Past tragedy is gradually revealed, forming the play’s dramatic heart.

The cast enthusiastically embrace their characters, as well as each other – sometimes literally. Perhaps the act of singing together has, as The Heartbreak Choir advocates, inspired a joyous sense of togetherness. As choirmaster Barbara, Maude Davey is a calm, inclusive leader-slash-counsellor, but eventually lifts the lid on barely constrained sorrow. William McInnes almost steals the show, hilariously conveying Peter’s awkwardness about expressing himself. His physical comedy is a hoot, as Peter’s police training kicks in as a last resort, but McInnes also nails moments of pathos when this bottled-up man tries to deal with his grief.

Three more broadly drawn characters also deliver the laughs in different ways. Ratidzo Mambo utterly convinces as the heavily pregnant Aseni, and hits the right notes with this character’s black-and-white but ultimately positive attitude. Louise Siversen suggests that Totty is on the spectrum, as she regurgitates facts and slightly recoils from human contact, while Carita Farrer Spencer is even more overtly funny as wisecracking Mack. 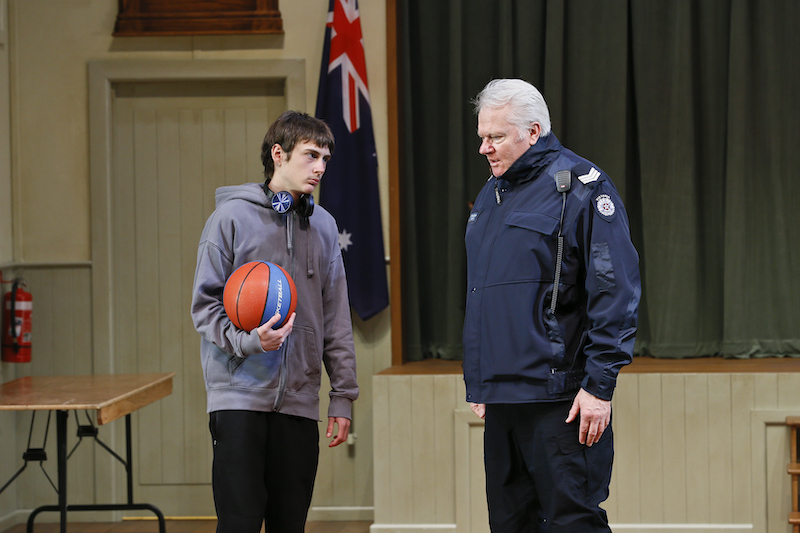 Making his professional theatre debut, Julian Weeks soon persuades us that Beau is an aimless youth with little to say, before subtly revealing the inner young man in a handful of centre-stage moments. Emily Milledge intrigues as Savannah, who usually only communicates through inaudible whispers to individuals she trusts, but then bursts out with an opinion or, more often, in beautiful song.

Milledge’s soprano is the outstanding voice among the cast, but their collective musical moments, chosen and directed by Vicky Jacobs, are delightful. Highlights are a gospel song from Aseni’s homeland, and the uplifting finale that, with a simple but very effective change to Christina Smith’s set, brings the audience into the play’s reality. Like the set, Smith’s costumes enhance The Heartbreak Choir’s verisimilitude, from Totty’s neat RM Williams-style workwear to Savannah’s gothy drapery and boots. Hats off to J. David Franzke and Matt Scott for the realism of their sound and lighting design, respectively.

This play makes you feel like a fly on the wall, watching and listening as a past tragedy is revealed, but ultimately bearing witness to the power of friendship and music to make life better. The repercussions of a criminal act late in the story are ignored for the sake of a happy ending, which feels lazy, but otherwise The Heartbreak Choir is a heartwarming night at the theatre.

Melbourne Theatre Company’s The Heartbreak Choir is at the Sumner Theatre until 28 May.

This take on Wilde’s play is not quite ideal, but just-right performances and beautiful costumes make it a comic delight.