The art of looking is a detailed one, driven by curiosity, hunger, delight. It is a fine art, like painting – the more we practise looking, the better we get at it. I read about looking and about public space greedily; I want to know how other people, other artists improve their looking skills, and how it impacts their work. When I went to see The Invisible Opera as part of Melbourne’s RISING Festival, I was also halfway through Flâneuse by Lauren Elkin, a book that turned out to be a rather apt companion read to this live performance. Elkin’s writing focuses on the great joy communities can or should take in public spaces, and therefore, the absolute importance of continued support and advocacy for those spaces, the way they impact communities – mostly for the better but perhaps, sometimes, for worse. The latter raises the question: what happens when not all people are permitted (not literally, of course, but sociologically, culturally) in public spaces? This seems to be a major thread pulsing through The Invisible Opera by Sophia Brous with Lara Thoms, Samara Hersch, and Faye Driscoll. 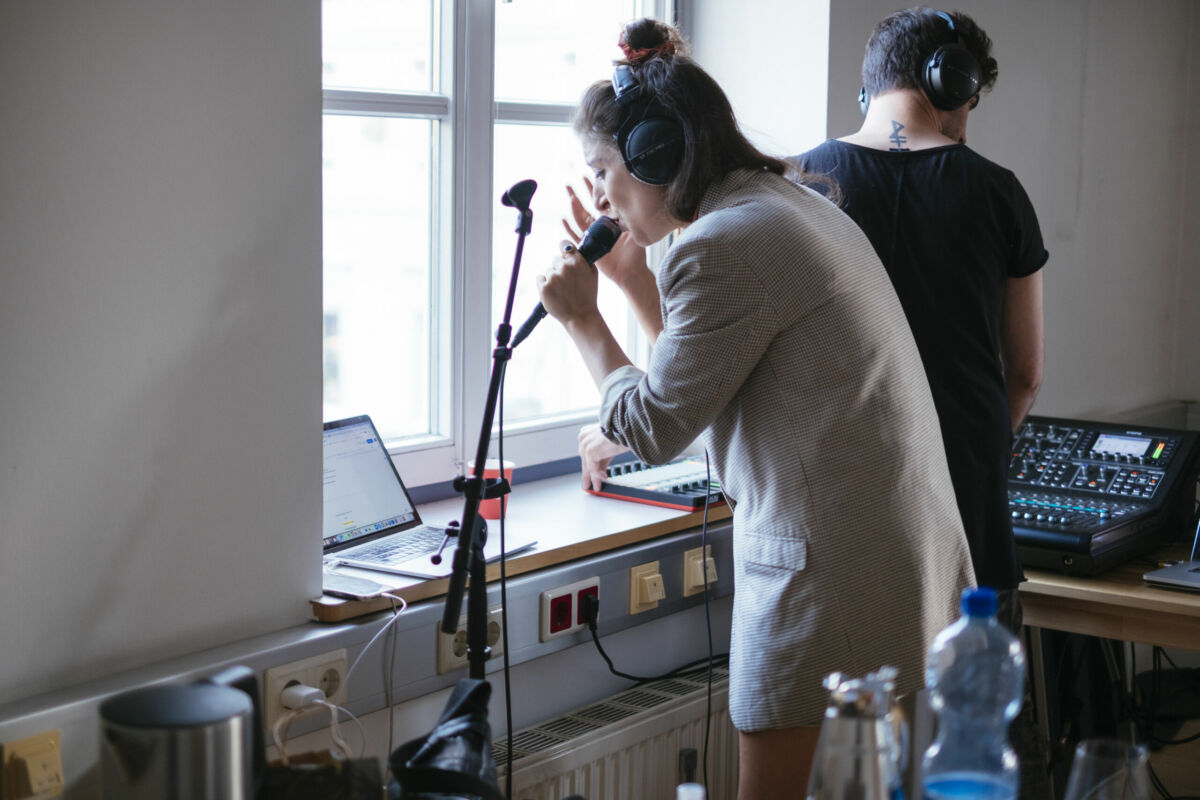 The name itself immediately stops you to think – why ‘opera’? What operatic elements will this piece of performance art contain? The opera, it becomes clear, is the drama: the messiness, the joy and pain and romance of the public space itself. It is the space’s inhabitants who use it in myriad ways – to sit and stand and lean, to take phone calls, to meet, to cry, to yell. It is a call to attention: what is happening right in front of you that you could be missing while caught up in the minutiae of your day?

Arriving at Federation Square for the outdoor, unsheltered performance of The Invisible Opera was slightly woolly – the show was delayed, the rain was threatening and the wind was biting. Perhaps 80-or-so brave audience members climbed into the raked seating, wearing beanies and gloves; shivering as we put on our headphones, adjusting the volume. Couples and friends held onto each other as Barry Manilow’s Keeping Each Other Warm played over and over in our headphones – initially funny, then dystopian and eventually, frustrating, as the performance’s beginning was pushed to accommodate latecomers and the track began again. Once begun, though, immediately we were asked to consider the city: there is the HWT building, the Crown Casino sign, two gulls overhead. The voice in our ears described the scene while ambient music soundtracked the experience. We were encouraged to think on the musicality, the rhythm, the majesty of the everyday; to reflect on the joys of observation. I did find myself wishing that I were experiencing this on a day when the Melbourne’s famous four-seasons-in-a-day was on the spring/summer setting; it is a surprising challenge to reflect on beauty when fat raindrops insist on blurring your vision. 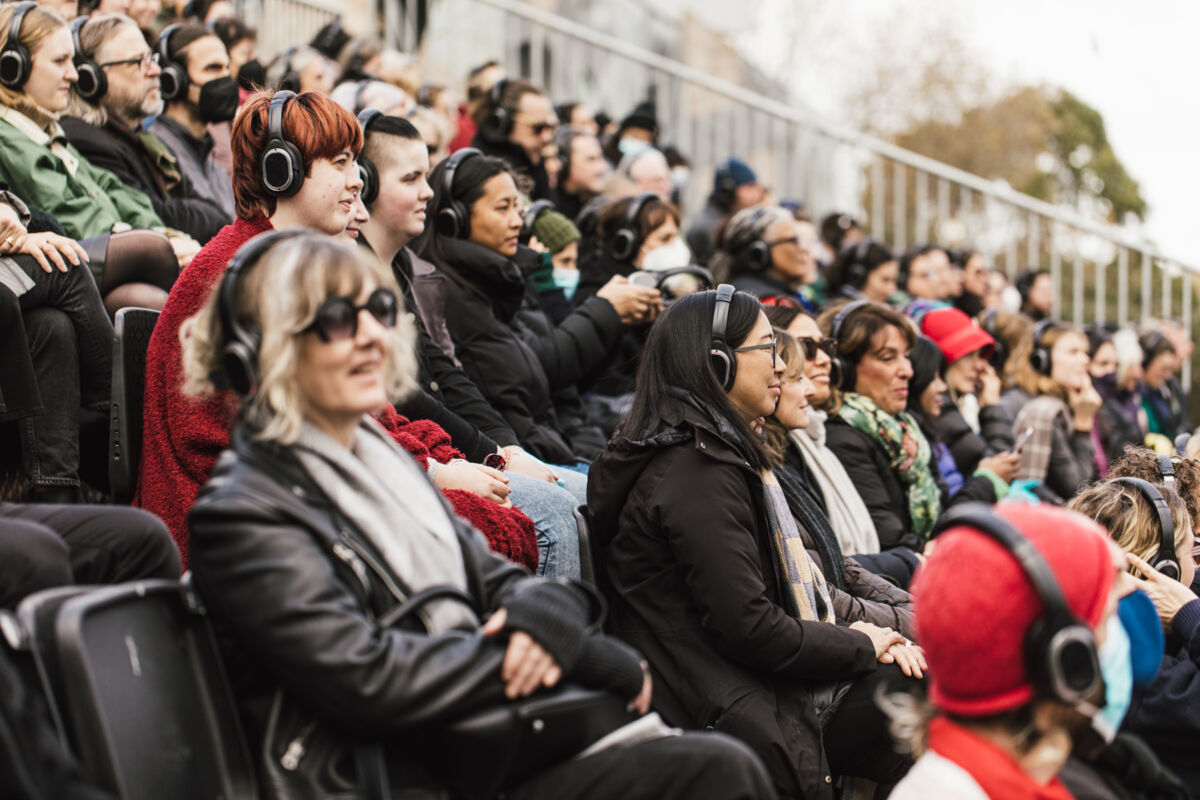 The audience for The Invisible Opera, June 2022. Photo © Anne Moffat.

The delicately spoken, sometimes sung poetic libretto describing the experience was novel, beautiful, well-improvised at points and moving, but I found myself asking, ‘Is novelty enough?’ What do we as audience members require from an artistic experience? Is it enough to simply document? Perhaps, yes; perhaps, no. Context is important here. This work, almost a meditation in the first half, allowed us to look closely at a city that was looking closely back at us. But from there it moved to something a little more uncanny valley – the natural movements of the city began to twist and morph into something a little stranger.

People giggled around me at some of the improvised observations as the narrator began taking more liberties with explaining occurrences in the Square, but I didn’t once feel amused. There was something strange about the experience of watching collectively in this way, something sad about the judgement it felt we were leveling at unsuspecting tourists, concert-goers, city-dwellers. It pointed out – whether on purpose or incidentally – the way we fill in the backstory of strangers to suit our own needs, and the convenience of putting people in boxes without looking to see if they fit.

I had walked through the Square earlier in the day on a work trip as another session of The Invisible Opera was happening, and couldn’t help thinking: was I referenced? Was I part of the show? Are we all simply here to be consumed? Are we, the general public, laughing along? Or are we being laughed at? That final question speaks to both sides – the people using the public space as it is meant to be used, but also The Invisible Opera audience, being observed observing. We were watching, yes, but it was hard not to notice that we were also being watched. The gap feels significant, and made me reflect, in hindsight, on the place of festivals and how we assess their programming – specifically, who they are curated for and why. Is art for everyone, or just those already in the know? Are we looking down on those who we, the artistically inclined, believe do not know better?

A French man, deeply troubled, shouting on the phone at someone and kicking and slapping at the flagpoles that flank Swanston St interrupted our connection. I was worried for him; watching it happen was upsetting, and made me feel voyeuristic. To watch someone in distress without helping, while listening to quippy chat about changing the channels on our headphones so we can get on with our “show” seems unhinged, un-human, unethical. The show’s architects purposefully blurred the lines, making it hard to know what was real and what was staged – I thought perhaps the French man was a plant, because no one was moving in to help him. Had the police been warned? The ‘setting’ of what was happening in front of us was, to begin, novel and humorous, but now felt overwrought. More questions appeared: what does it mean to be observed? What are the ethics of watching and being watched? 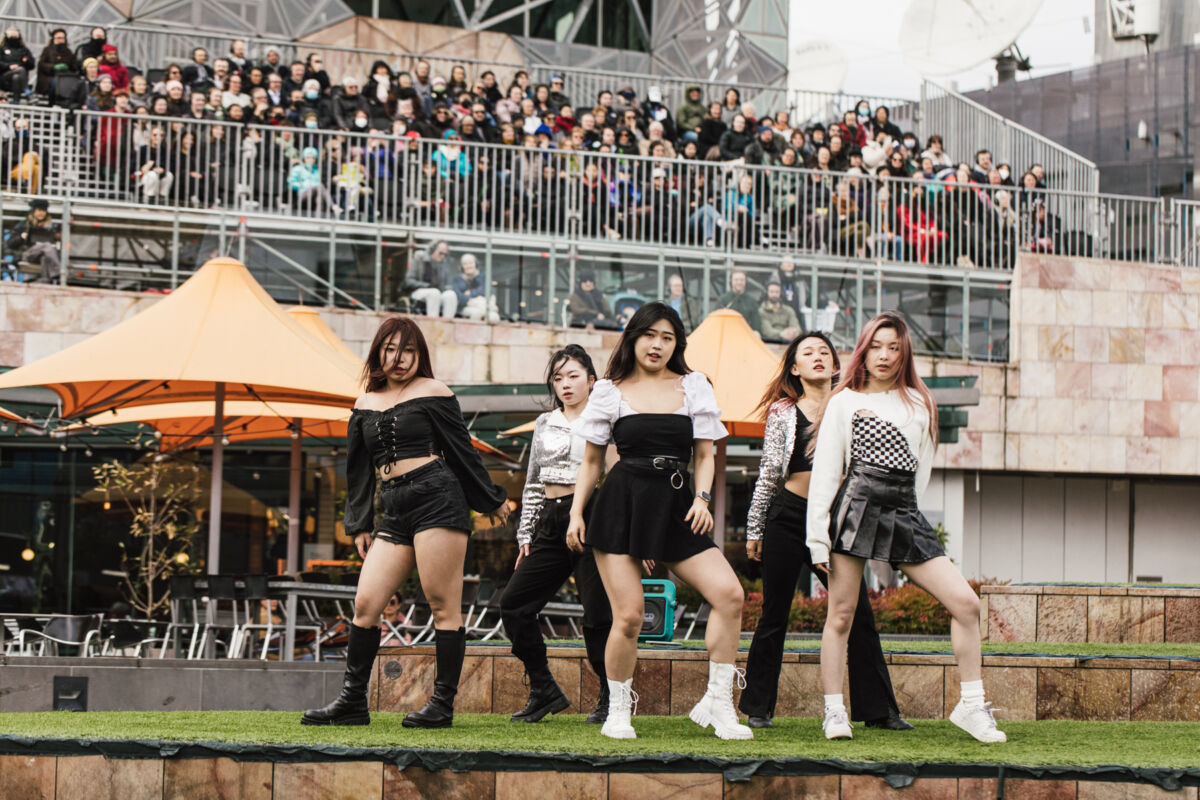 Then as soon as it began, the man was gone; in his place an American-style float boasting larger-than-life boxes of popcorn appearing on the road in front of us, driving slowly, holding up city traffic. I had to blink a number of times to confirm I was seeing something real. A tap dancer in Melbourne Demons garb began setting up next to the RISING merchandise stand (which in another dystopian move, was selling long-sleeve t-shirts for $80), then a giant purple monkey was inflated and wrangled by several attendants, followed by a squad of five TikTok dancers who began their synchronised routine. In our headphones, bonafide operatic music began to play, highlighting the strangeness of what we were all doing on that grey night. It seemed completely appropriate for opera to be playing as this Margaret Atwood theme-park fever-dream came to life around us.

Standing quietly at the edge of the Square the next day, there by chance rather than design, I watch the ‘screaming French man’ finish his performance and take his glasses and hoodie off, morphing from character to actor in front of my eyes. Our eye contact is fleeting, but it unsettles me. Something twists inside my gut; the mask is broken. Nothing is sure – our judgments are mostly based on conjecture; public spaces holds secrets in their folds; the people working and walking alongside us are complex, and cannot be so easily boxed. I am not sure what to take away from this – a deeper empathy? A reminder to think and speak kindly of those around us? A fear about festivals becoming narrower in focus, in context, in audience?

I cannot stop coming back to the question of who art is for? Who is the festival for? And how can we continue to lessen the gap between us and ‘Them’ – the people we should be talking to (everyone) – and the people we are currently talking to (ourselves)? All good questions, I believe, but I did catch a cold while contemplating them.